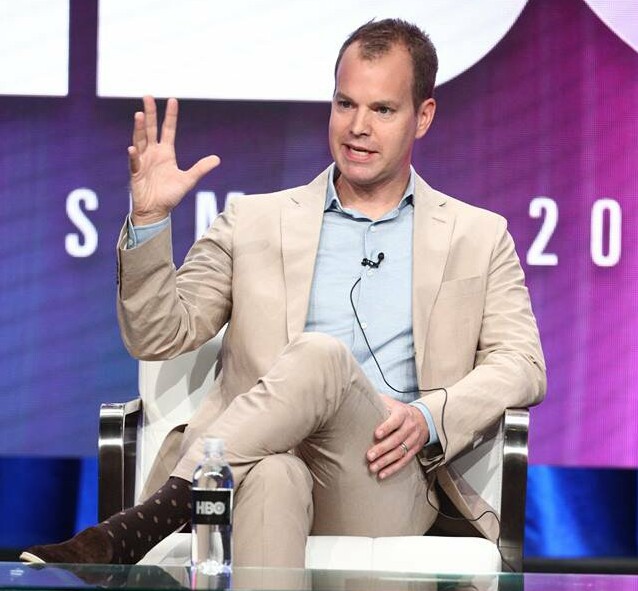 Beverly Hills, CA – As if further proof were needed that reboot and remake fever has overtaken the television industry and the journalists, bloggers and tweeters who cover it, the moment that generated the most excitement during the first two jam-packed days at the Summer 2018 Television Critics Association tour was HBO’s announcement that after 11 years of unrelenting requests a Deadwood movie will soon begin production, perhaps in October.

“Today is your lucky day because I can finally, finally confirm that we are greenlit on the Deadwood movie,” HBO’s President of Programming Casey Bloys told TCA members during his session at the very start of the first day of the tour, instantly putting even the most jet-lagged critics in a happy mood.  “It has been a logistics nightmare getting all the cast members’ schedules lined up, but we are there and it is greenlighted.”  He said he hopes the movie will premiere in spring 2019.  “But let’s get the cameras rolling before we worry about that,” he added.

Next up, in order of importance, was the impending conclusion of Game of Thrones, also targeted for the first-half of 2019, and the much talked about possibility of multiple sequel series being produced once GoT ends.

“The update I will give you on prequels is we are doing a pilot that Jane Goldman wrote,” Bloys revealed.  “Our thought going into it -- the reason we did multiple scripts -- was that out of five we’d be lucky to get one that we [would be] very, very excited about, and we did get that.  So, for right now we’re just starting the search for a casting director.  We hope to be shooting sometime in the New Year.  But beyond that, there are no plans to make any other [sequels] at this time.”

Does that mean that the other four spin-offs are deceased or just sort of on hold until you see what the first pilot looks like, asked one unnerved critic.

Bloys was brief.  “Combination,” he replied.

The elephant in the room that threatened to harsh the group’s buzz was WarnerMedia CEO John Stankey’s recent remarks in a meeting with HBO’s staff that may have suggested that AT&T was going to somehow interfere with the pay cable giant’s programming.

“Let me kind of put this as clearly as I can,” Bloys said.  “There are no plans to dilute the HBO brand in favor of volume of programming.  No one has come to us and asked us to not do what we do, which is curate excellence.  John and AT&T have been very complimentary about what we do.  What I heard in the meeting with John was someone talking about investing in programming, which was music to our ears.

“You know, one of the challenges that we’ve had the past couple of years working for Time Warner [is] we were at a corporate entity that was preparing itself for sale, as opposed to investing in programming,” he continued.  “So, this is the first time in a long time we’ve heard anybody talking about investing in programming.  I took that as very exciting.  And again, no one has talked about diluting our brand, or increasing the volume to a point where we lose quality control.”

Asked about the public speculation and internal anxiety that took place in the press once details of the meeting were made public, Bloys replied, “I understand that any time there’s an acquisition or a merger, there’s anxiety.  I understand people wanting to know what’s going on.  It was simulcast to several offices, so the fact that it got out is not a shock.  I’m just glad that I can be here to tell you, again, there are no plans to dilute HBO programming.  No one is asking us to take pitches of a Love Boat reboot or anything like that.”

With long-running hits Veep and Game of Thrones coming to an end, Bloys was asked if this is the right time to be having a conversation about investing in more programming.  “Anytime is a good time to invest more in programming,” he said, recalling the time about ten years ago when both Sex and the City and The Sopranos ended their runs.  “I was head of comedy when Entourage went away.  There was a lot of, ‘Oh my God, what are they gonna do with no Entourage?  If you’re open, if the development team is open and supported and we’re working with talented producers, writers and directors … you know, we’ve been doing this for a long time, I think we will be okay.

Another elephant was hiding in the corner: The unresolved issues involving sexual assault charges made against James Franco, executive producer and star of The Deuce, which is shooting its second season.   Did HBO have conversations about how that might affect the show moving forward?

“We did,” Bloys replied, noting that HBO recently terminated deals with Russell Simmons and Mark Halperin.  “When the Franco issue came up we talked internally, we went through all the information and we talked to the executive producers and [star] Maggie Gyllenhal and the actresses and actors on set and we all felt comfortable moving forward with the second season.”

Also coming up on HBO in the year-plus ahead:  An extraordinary documentary about Jane Fonda titled Jane Fonda in 5 Acts; a new series from Damon Lindelof; a third season of True Detective, this one starring Academy Award-winner Mahershala Ali, and the second season of Big Little Lies, featuring new cast member Meryl Streep.  “I’ll tell you, Big Little Lies season two is amazing,” Bloys beamed.  “I have a newsflash:  Meryl Streep is very, very good.”

Bloys also said that Curb Your Enthusiasm will return when Larry David “feels ready and tells us he wants to come back.  He’s working on [a new] season.  I expect he’ll be back soon.”