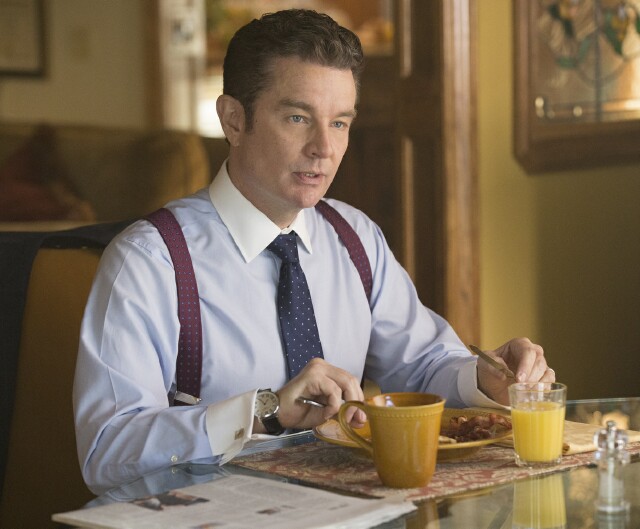 Hollywood, CA -- As tortured genius Victor Stein on Hulu’s Marvel’s Runaways, James Marsters, on the surface, is not the perfect father.  Like the rest of the runaways’ parental units, Stein lied to his son Chase (Gregg Sulkin) about being an evil so-and-so; the reason all the runaways banded together in Season 1 to, well, run away. While the character appeared to receive his comeuppance at the end of the first season he does live, albeit in suspended animation, to appear in Season 2 which is currently in production and due to start streaming later in the year.  Fans of the series will agree -- he’s simply a bad dad -- yet Marsters has his own view on the character’s parenting style.  “I would argue that Victor is not a bad dad,” he told MediaVillage during a recent set visit.  “He’s not the perfect dad, and he may be a little too hard on his son -- maybe a lot too hard -- but it’s better than being too easy on a genius kid.

“Sometimes it’s bad parenting to say you are doing fabulous and here’s a trophy when they are getting Cs and have a 175 IQ,” he continued.  “I think it’s good parenting to push kids sometimes.  He wants what’s best for his son and he wants him to go to M.I.T.  He’s not doing that living in an underground hostel.”

Since bursting onto the scene in 1997 as Spike in the instant classic Buffy the Vampire Slayer, Marsters credits 21 years in showbiz for becoming an expert on navigating Hollywood.  He has tried to impart some of that wisdom on his TV son; however, after one notable conversation he soon realized his advice wasn’t needed. “I’ve been in the business long enough to see young kids have a hard time with fame,” he explained.  “I pulled Gregg (pictured below) aside and told him about the perils of fame and how if he ever wakes up in the morning feeling sorry for himself or feels that he is working too hard, he’s walking soft and should be careful of that because the end of that road is lonely town. 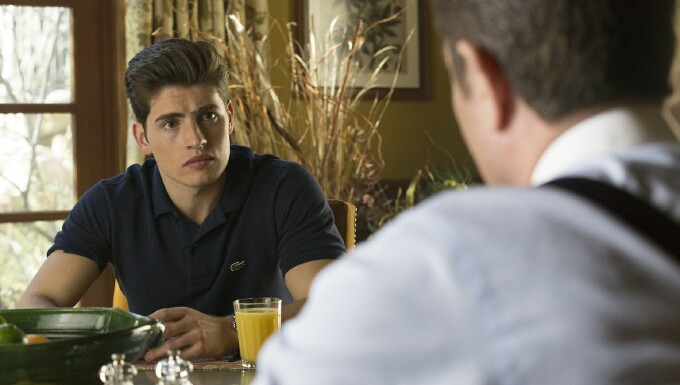 “I went on and on and on,” he added.  “He was very polite, a gentleman, and made me feel like he valued my input.  But I have come to discover he is naturally geared toward humility and hard work and not developing a big ego.  (Executive producers) Josh (Schwartz) and Stephanie (Savage) have naturally cast people that have a strong foundation and they don’t need that strong validation.”

In fact, Marsters has nothing but praise for the entire young cast.  “I have to say they are fabulous,” he beamed.  “They’re rock solid and I don’t think any of them need my advice on the perils of fame.”

Marsters revealed the details of one pep talk he received as a young actor.  Had he listened to the advice given, we may never have seen him at all.  “There was an actor with the Berkley Repertory Company who sat me down after I graduated, and before I went into college, and explained that I shouldn’t be an actor because I’d be poor and unless I was comfortable with that, I should think about another career.  I said, ‘I still want to do it.’”

He was thrilled to hear the recent news of a possible new Buffy the Vampire Slayer going into production.  His understanding is that it will be a new slayer within the established Buffy universe and thinks that direction is a great way to go.  “I think the world needs a new slayer right now,” he said with a smile.

And should that universe require a familiar face, Marsters is definitely in.  “I am open to whatever Joss (Whedon) has in mind, be it Spike or something else,” he said.   “We’d have to get some really good lighting together to sell Spike, but they are doing more and more with special effects,” he laughed.  “What would be great is if Spike came back and was all, ‘Buffy you look terrible.  I still love you, of course.’  Joss’ mind is always surprising so yeah, I am open to playing Spike if Joss is involved.”

Until then, Marsters is looking forward to the premiere of Season 2 Marvel’s Runaways and is letting fans in on just what to expect.  “Season 1 was about the inevitable gulf that opens between kids and parents,” he shared.  “We lie to our kids.  I’ve done this; it started when they were about three years old with Santa Claus. Season 2 is about, are the kids going to become their parents?  They have run away and are in the world without their parents’ protection.  They have to make hard choices; will they follow in their parents’ footsteps?

Season 1 of Marvel’s Runaways is currently streaming on Hulu.