TCA: PBS' Paula Kerger On Why PBS Is More Important Than Ever 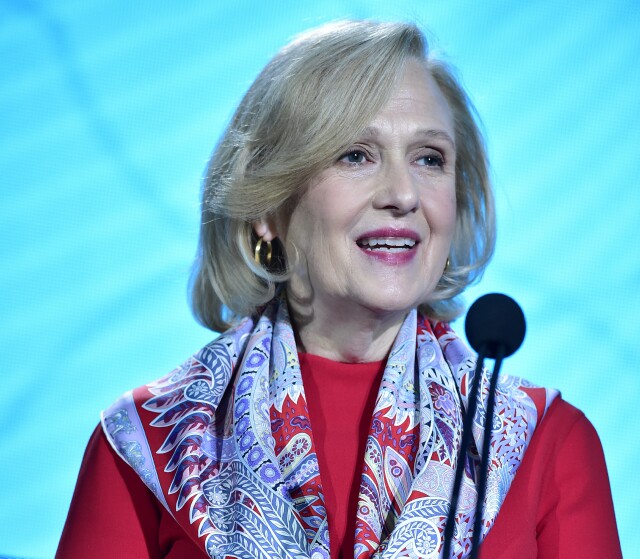 Pasadena, CA -- The two days of PBS panels at every Television Critics Association tour are often the least attended, which doesn’t mean the turnout is anemic – only that it is not as robust as the broadcast and cable networks.  Especially noticeable is the absence of younger TCA members, who tend to clear out when PBS comes in.  This was not the case when I joined the TCA way back in 1990 and for many years thereafter.  PBS panels were packed back then.  I suspect this change is due to a lack of interest in the brain-food, culture vulture programming PBS promotes at TCAs, especially among Millennials (sorry, kids), and/or budget cuts by their editors and publishers.  (Whether young and naive or simply desperate or greedy, some of them do not prioritize public television).  Regardless, PBS is a free service that provides education, entertainment and information to all Americans, and given the social, political and economic issues facing everyone in the country, how can those not be valuable attributes worth supporting?  Unlike so much content available today, PBS is not niche; nor should it ever be thought of as such.

“This past November marked the 50th anniversary of the signing of the Public Broadcasting Act,” PBS President Paula Kerger (pictured at top) reminded us Tuesday during her session.  “When President Johnson signed that landmark legislation, he envisioned a public media that would ‘elevate and enrich’ our national life; a media that would inspire and educate, as well as entertain.

“Not only is public media relevant for these modern times, I believe that our work is more important than ever,” she continued.  “In this era of deep division, public broadcasting does not separate audiences into categories based on who they are, where they live, or what they believe.  We are unwavering in our service to all Americans, helping to understand our past, informing our present, and working in communities to create a brighter future.”

Kerger noted that Tuesday didn’t simply mark the first day of PBS’ portion of the Winter 2018 TCA tour.  It was also the first anniversary of the launch of its 24-hour PBS Kids service, which now reaches 95% of U.S. television households via broadcast and streaming through local stations.  Of most importance, she stressed, the free service “is making a difference in the lives of millions of families, especially those in rural and underserved communities.”

As always, essential federal funding and the threat of budget cuts was top of mind.  Since she last met with TCA in August 2017, Kerger noted, “the key Senate committee recommended full funding for this fiscal year, and the House of Representatives passed an omnibus bill with significant funding.  As the House and Senate work toward a final appropriations package, we are hopeful that it will include full funding for public broadcasting.  Despite our progress, we expect that some in Washington will again attempt to eliminate funding in the next budget, a process that begins in just a few weeks, so it is important that we continue to demonstrate our value and share stories of impact.”

To judge by the broad range of panels PBS presented during its two days at TCA – from documentaries about unknown civil rights activists and the history of black colleges and universities to concerts by Nas and Sutton Foster to the usual top-shelf British dramas and so much more -- it is hard to imagine anyone not appreciating its value and impact.  (That's the legendary Angela Lansbury, below center, being applauded by her young co-stars from the upcoming Masterpiece limited series Little Women at a PBS panel for the program.) 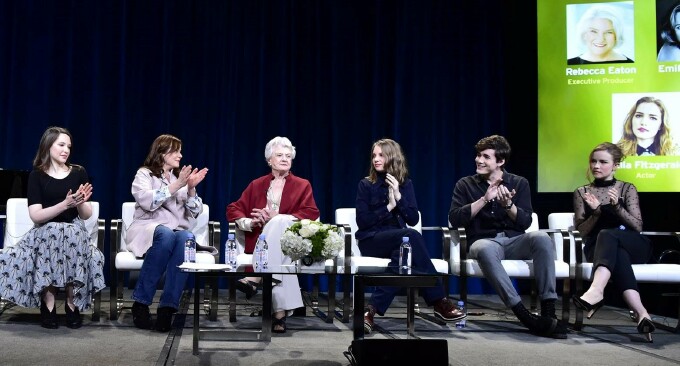 “As the past year illuminated, our nation is at a crossroads on many issues of consequence, with divergent views about the path forward,” Kerger continued.  “It is our job in media to shed light on these issues.  In some cases, we have even been a part of the story, including the seismic #MeToo movement. As we consider the opportunities and challenges before us, we have two options. We can retreat to our respective corners and succumb to polarization, or we can come together for a national conversation, a conversation that focuses on our shared ideals and aspirations.  I believe that Americans are eager to take the second path.

“With our local presence and strong bond with the public, we bring people together for important and sometimes challenging conversations about who we are as Americans and what the future should hold for our country,” she added.  “In order to foster civil discourse, we must create a space apart from the hyperbole of today’s divisive news climate.”

Of course, critics couldn’t wait to dive into the scandals surrounding PBS stars Charlie Rose and Tavis Smiley.  Why, one wanted to know, did it fall to the Washington Post to uncover the allegations against Rose rather than PBS’ own news division?

“The way that we’re organized is the production that comes to public broadcasting is all done by independent organizations, as was Charlie’s,” Kerger explained.  “It was an independent production company that was housed at Bloomberg, and that’s where he produced his program.  All the human resources, all of that came out of his own organization.  We learned of the issue with Charlie Rose the morning they actually [broke] the story in the Washington Post.

“When we are aware of issues, we move quickly, as we did with Charlie Rose, and as we did when we had the complaint with Tavis Smiley, which was different,” she continued.  “In that case we were approached directly by someone who had an issue rather than a media organization that had gone through a whole research period on their own.”

Reminded that Rose has largely acknowledged his behavior, while Smiley has not, Kerger replied, “There were different processes for both, because in the case of Tavis Smiley, because we were contacted by someone, we hired a law firm that has expertise in this area and had them conduct the investigation.  That investigation, by the way, included a quite lengthy interview with him.  It was [the] multiple allegations of inappropriate behavior, as well as his own words about what happened, that led us to the decision to suspend his series.  As is the case with every other story that we’re seeing play out, not just in media, each one is a little different.  In our case the [processes were] different because the Washington Post did all of the research in the case of Charlie Rose, and in the case of Tavis Smiley, the responsibility for that research fell on us.”