TCA: Pop Pops with Darlings, Dancers and Diet by Diamantopoulos 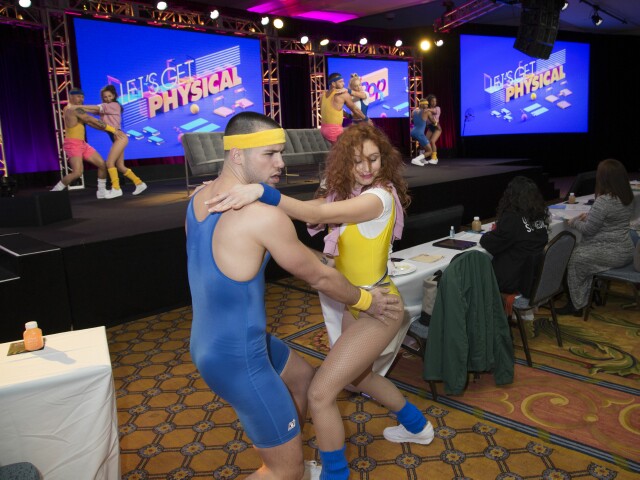 Pasadena, CA – It isn’t easy to snap members of the tiring Television Critics Association to attention, especially as they near the completion of their second week of non-stop press conferences and other activities.  But that’s exactly what Pop TV managed to do on Sunday with a dynamic presentation filled with content-appropriate surprises.  It began with an appearance by Christine Lakin, Jodie Sweetin, and Beverley Mitchell (pictured left to right below), glammed up in character as the exaggerated versions of themselves that they portray on the network’s Hollywood Darlings.

“Finally, an award show where three women host!” Lakin gushed from the stage.

“Honey, the TCAs is not an award show,” Sweetin corrected.

“Are you kidding me?” Lakin gasped.  “I worked all week with Bruce Vilanch on my patter!”

“Now it makes sense why you’re wearing that ridiculous dress,” Sweetin swiped.  “You look lovely, but it’s a bit much for 11 a.m.”

“Do you know how hard it was to get a black dress a week after the Globes?” Lakin replied.  “I practically had to rip this off Millie Bobby Brown’s little body!” 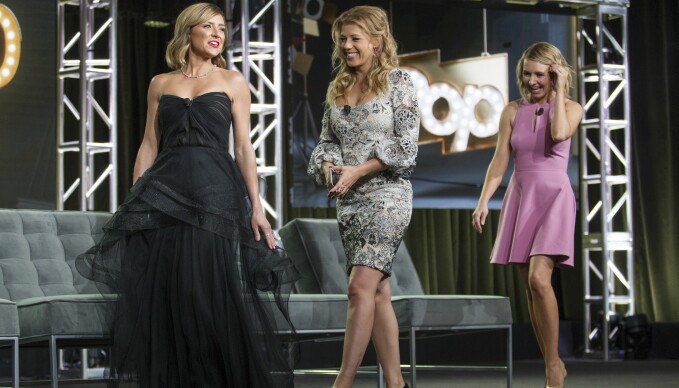 Lakin then signaled for a video compilation of clips from Pop shows to begin. “And now, the nominees for shows appearing in the Pop network sizzle are …” she began, quickly eclipsed by the reel itself.  With that, the ladies were gone.  In their place stood Pop President Brad Schwartz.

“[Today] marks a very significant milestone for Pop,” he said.  “Today we celebrate our third birthday.  On this day [January 14] in 2015, we rebranded a utility listings channel, literally a channel that told you to go to other channels, and transformed it into one of the fastest-growing networks in all of television with premium scripted content, award-winning talent and over 400 hours of original programming. With the support of our owners, CBS and Lionsgate, we’ve made progress across all areas of our business, bucking all the industry trends. We’re growing our ratings, we’re growing our distribution, and we’re growing our ad sales.”

After Schwartz’, the Grand Ballroom at the Langham Pasadena Hotel suddenly came alive with spandex-clad dancers gyrating to the 1981 Olivia Newton-John pop classic “Let’s Get Physical,” which is also the name of a new Pop comedy that debuts January 24.  Not surprisingly, it is largely set at a gym. 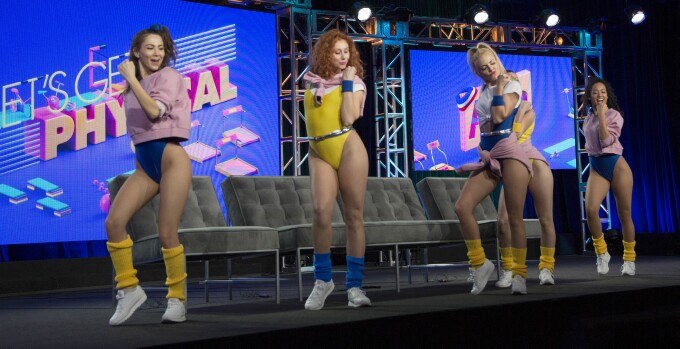 “I hate the gym,” declared series co-star Annalynne McCord, looking sincere.  “I hate it!  It’s awful!  I do not like the gym at all.”

“Why?” quizzed a critic.

“Because I have to work out there!” she replied, generating much laughter and setting the tone for the session to follow with McCord (pictured below left) and the other three stars of the show (pictured left to right) – Matt Jones, Jane Seymour and Chris Diamantopoulos.

The fantastically fit Diamantopoulos (last seen as the dad in Fox’s live telecast of A Christmas Story)revealed that his brother Gus has run a strength training facility for 25 years – and proceeded to undercut the main messaging of the fitness industry.

“I really don’t like gyms at all,” he said.  “I’m sort of [my brother’s] guinea pig.  There is a secret [to fitness].  You’re lucky to be here today because I’m going to tell you the secret that the gym industry has been keeping from all of us.  The truth of the matter is -- and this is a scientific fact -- you can go to the gym all you want, but it’s not going to make any difference in the way that you look.  The truth is, unfortunately, it really just has to do with what you eat.  Sorry, but that’s what it is.  It’s just diet.  You could never go to the gym and eat correctly and look like you spend what people would think are hours at the gym every day.  If you can mitigate your diet and then maybe walk a little bit or do something, whatever, then you should be all right.”

“Yeah, but food is really great!” Jones, who plays Diamantopoulos’ characters’ rival, complained as the critics, who have been very well fed these last two weeks, loudly laughed.

“But you should still watch a show about gyms, because that’s important!” McCord interjected.  Much laughter followed from the critics, who from the looks of things generally choose sitting and watching anything to working out.

“Before our 10th lunch buffet in a row, what should we be eating, Chris?” one of those well-fed critics asked.

“Very, very good question,” Diamantopoulos replied over another wave of laughter.  “Look, I’m sure it’s probably not necessarily the same for everyone, but I’ll tell you what my brother says.  Stay away from sugar and, if you can, stay away from flour.  Eat fats like, you know, avocado and olive oil and butter, and eat some good quality protein, and eat lots of vegetables and some fruits.  If you can stick with that and drink water, you should be all right.  That’s what Gus says.  So this is all on Gus right now!”

Asked by a young critic what was so much fun about the ‘80s aerobics craze with its shiny skin-tight leotards, Seymour replied, “I loved it.  I thought it was great fun.  I used to go to the Jane Fonda workout [studio] all the time.  The only problem I had was, as a dancer, I knew they were sometimes getting people to do things that were not wise, you know?  They weren’t doing the right kind of technique.  So I used to try and correct people in the class, and I think that’s when I stopped going.”

“I love aerobics because of the smiling stupidity of it all,” said Jones.  “We found with all the choreography we did and dancing on the show, the funniest thing to watch was Chris just jog in place and clap and smile.”

“One of my favorite moves by Chris is when he literally does basically a handstand, but then starts clapping his feet up in the air,” McCord laughed.  She called it “monkey clapping.”

As if on cue, Diamantopoulos then assumed the position in the photo below and showed us how it’s done. 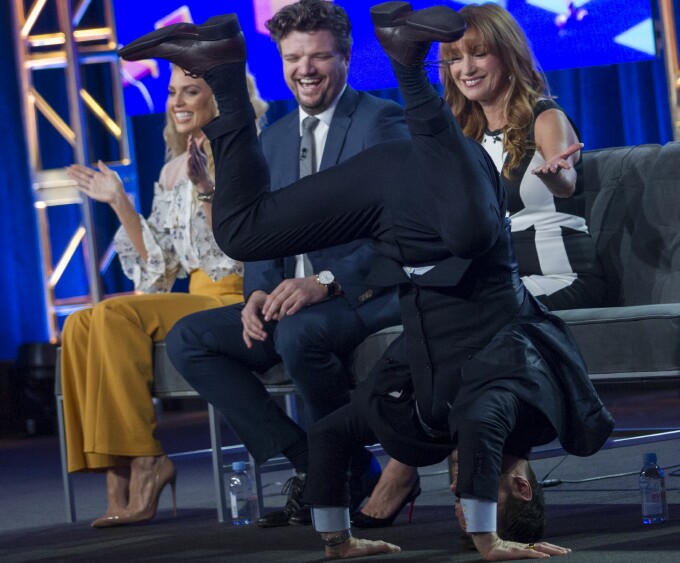 “Oh, my God!” cried Jones.  The room roared, most of us later admitting that we had never seen anything like it.

After that session came an even funnier one for Pop’s signature comedy Schitt’s Creek, which will begin its fourth season on January 24.  Series stars Daniel Levy, Catherine O’Hara, Annie Murphy and Eugene Levy (pictured below, left to right) held court and kept Pop hoppin’ until the end. 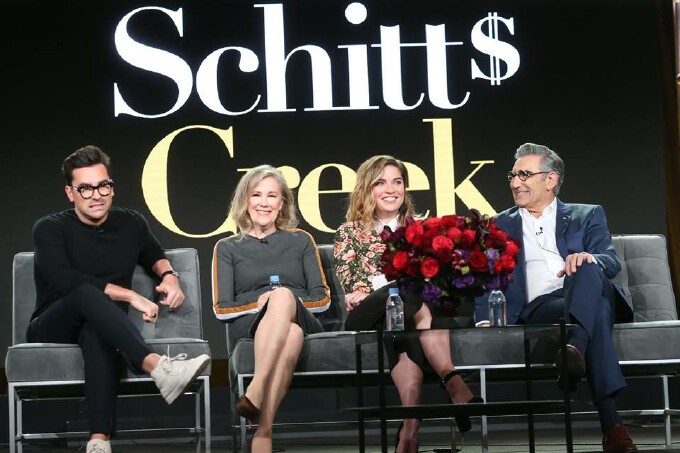