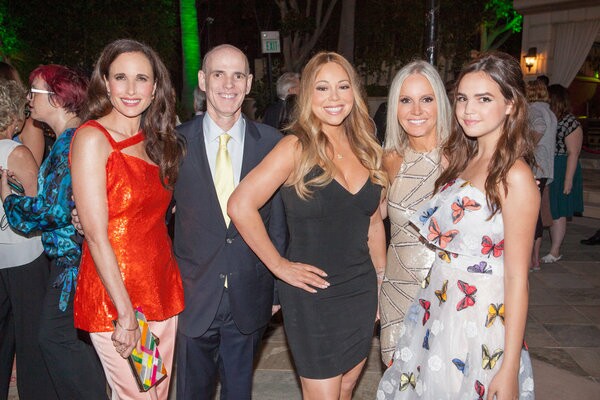 One of the most interesting things about covering the cable days of the twice-yearly Television Critics Association tours is observing which networks or network groups most successfully grab the attention of the hundreds of reporters and critics attending their press conferences and which ones don't make much of an impression at all. The results can be very surprising.

One thing is clear: With dozens of networks and streaming services staging panels for hundreds of programs, the presenting entities have to do something to stand out from the crowd, especially if they are promoting programs that don't necessarily promote themselves (meaning those that may not instantly generate big buzz for whatever reasons).

National Geographic Channels and Hallmark Channels excel at this. Nat Geo hosts an informal party with its talent and executives on the nights before the days that the Winter and Summer tours officially begin (also known as the travel days for TCA members). This event acquaints reporters with Nat Geo personalities they may not know in advance of their press conferences the following day, which can lead to more robust Q&As and/or follow up interviews. Nat Geo also creates an environment within the ballroom that TCA members spend countless hours in over a three-week period. That goes a long way toward holding their interest, as well. (Even the grand International Ballroom at the Beverly Hilton Hotel, the home of the annual Summer tours – and the Golden Globe Awards -- starts to feel like a run-down lecture hall after the first 50 hours or so.)

Hallmark really hits it out of the park. Having seemingly abandoned traditional press sessions in the tour hotels, Hallmark instead takes TCA members off-site to deluxe mansions to attend giant parties with its executives and talent. (Pictured at top from this week's party are actress Andie MacDowell, Crown Media Networks President and CEO Bill Abbott, Mariah Carey, Crown Media Networks Executive Vice President of Programming and Network Publicity Michelle Vicary and actress Bailee Madison.) Schmoozing is encouraged. The vibe at these events is extraordinary; talent is so relaxed in the Hallmark environment that hundreds of interviews are conducted and countless plans for coverage come together without anyone getting stressed (except, perhaps, for the tireless Hallmark publicity team that pulls this all together). These parties have become so popular that no less a publicity averse star than Mariah Carey showed up at this week's bash. (She's going to direct and co-star in an upcoming Hallmark Christmas movie.)

To look at the Hallmark event in another light, in approximately three hours two networks promote several dozen movies and series in a manner that gets the press interested.

This is not to say that every network has to throw an outsize party or event to present its product to the press. Back in the ballroom, simply changing the lighting and leaving a fancy flash-drive at each seat can make a difference. Take things a step farther and everything is golden (unless the press strongly objects to the show/shows on display). But leave the room largely barren with a lone piece of paper or less in front of each chair and the session is instantly at a disadvantage.

It's called marketing, or promotion, or creative publicity, and it helps content – especially unknown content – stand out amid the all-consuming madness of entertainment saturation that defines our era.

Most impressive are the lesser-seen networks (or "little guys") who try a bit harder at TCA and succeed. WGN America on Wednesday presented a press conference for its dramatic gem "Manhattan" (the best show on television that people aren't watching and industry organizations are not honoring) followed by a lunch with the cast that generated a great deal of renewed interest in this largely under-appreciated show. (Further, a preview of some of WGN's upcoming dramas gave the impression that it is poised to become the next AMC.)

On Thursday, Up and the El Rey Network – neither a top-of-mind concern at TCA – hosted highly impactful press conferences without any fancy extras. Up shrewdly chose emotionally charged projects to promote that couldn't help but command attention (including a reality series titled "Last Hope with Tony Dunn" in which people who have been apart are reunited, including people given up for adoption who later meet their birth parents).

At the opposite end of the spectrum, El Rey Network simply offered comments from personable chairman and founder Robert Rodriguez and a preview of upcoming segments of the interview series he hosts ("The Director's Chair") followed by a panel for the vampire action-drama "From Dusk to Dawn," which begins its second season next month. All it took to set the stage for that one was a dynamic sizzle reel and a panel of very charismatic actors as well as Rodriguez, who is no slouch in the personality department. Plus "Dusk" co-star Danny Trejo was on stage and that always works.  This is a show that would certainly get more coverage from the press if more of the press had access to El Rey.