TCA:  The Mooch Disrupts a PBS Panel, In a Good Way 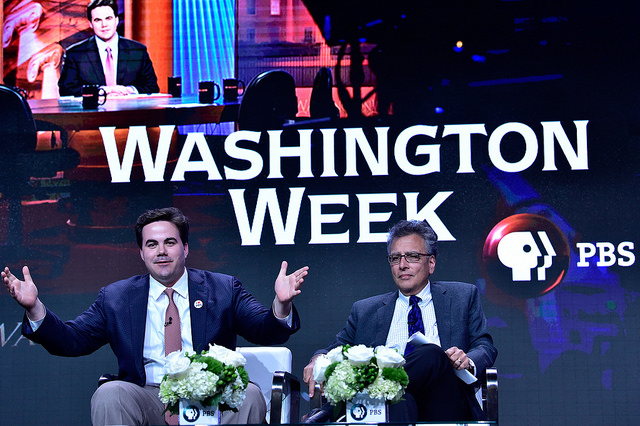 Beverly Hills, CA -- The Summer 2017 Television Critics Association tour excitingly collided with the real world in real time Monday when White House Communications Director Anthony Scaramucci was fired after only ten days on the job just as a press conference for the Friday night PBS news program Washington Week was about to start.  Indeed, the session began with an announcement by Marie Nelson, Vice President of News and Public Affairs at PBS, that according to multiple sources the Mooch was out.  Her words were met with an uncharacteristic round of applause by the reporters in the room, at most times a tough group to activate.  “Welcome to the high velocity world of political news,” she said with a smile.  “At a time like this, I’m incredibly pleased to introduce you to Robert Costa, the new moderator of Washington Week.”

There were many good reasons for PBS to schedule a session for Washington Week during its two-day portion of the summer tour, the current turmoil in the nation’s capital being high on the list.  But 2017 marks the 50th anniversary of the series, which of course calls for some sort of acknowledgement, and Costa (pictured at top, left), a star political reporter for The Washington Post and now the eighth moderator in the history of Washington Week, has only been on the job for four months, so TCA members had not had the opportunity to meet him.

“Bob is unapologetically passionate about politics, and on a day like this [with] a brand new White House chief of staff [and] an ousted communications director I know that he’s itching to get back to Washington,” Nelson said.  “He understands that the public depends on the fourth estate as a necessary part of a healthy democracy.  He’s working 24/7.  He has amazing access.  Ask him what really makes Trump tick or what the Democrats are doing about 2020, and you’ll get a surprising, honest and well-sourced answer.”

Costa won over the room right at the start.  Asked how he covers an administration “with so little awareness at all of its own failings” that “appears to have no self-consciousness at all,” he replied, “Do you guys think you’re the only ones covering drama?”  That response was met with the second big round of laughter in the lively session.

“This administration comes out of the family organization that President Trump ran for decades,” Costa explained.  “He’s always surrounded himself with confidants and loyalists.”  Moments before the session Costa had sent out a tweet about Scaramucci based on a text he had received from a source.  “The source said, ‘The [Trump] family really didn’t like the Scaramucci interview.  It was too vulgar.  It was embarrassing to the White House.’

“I think your point is, based on [the] Access Hollywood [tape] and everything else, how could they say that?” Costa said to the reporter who has asked the question.  “They really do have a perception gap in how they say what the Trump family can do, what the inner circle can do, and what the outsiders can do.  If you’re an outsider inside of this White House, you’re always vulnerable.  Scaramucci was brought in as someone without deep ties to this family.”

Speaking about Washington Week, Costa explained, “I just want to try to make [the show], which has such a rich history, to be this destination on a Friday night, to get some of my rivals together, colleagues, people I respect, people the audience respects … no frivolous stuff, just talk politics and policy.  For half an hour, go in depth, don’t have distractions, just have a reporters’ roundtable and keep it genuine to the topics at hand.  When reporters are amongst other reporters, we don’t have the soft stuff.  We want to know who’s up and down and where are the policies really going.  To me, Washington Week is perfect timing as a political reporter -- even though a lot of news seems to break on a Friday in the Trump administration.  We want to review the week … but its minute-by-minute in this White House.”

Under his watch, and that of WETA executive producer Jeff Bieber (pictured at top, right), Costa says they have tried to ensure that Washington Week is “committed, I hope, more than any other show, to explaining policy to people.  We’ve had programs that were entirely devoted to healthcare.  I felt as a reporter when I was on the Hill that the Medicaid expansion questions and what the Medicaid effect was for people across the country, especially the poor, was not being fully explained,” he continued.  “PBS is this wonderful place where you can actually take the time to explain policy … on foreign policy, on North Korea, on the Middle East.”

Costa was asked if the morale of the Washington press corps is at an all-time low given Trump’s ongoing attempts to put down much of the media and define much of its content as “fake news.”  He said the truth is quite the opposite.  “I don’t think it’s at an all-time low,” he mused.  “There is energy right now that this is new, that this may have consequences, negative or positive.  This is one hell of a story we’re all living in, and if you’re a reporter, you embrace the story.  It may not be the perfect story.  America is changing.  The world is changing, facing big issues on economy, politics and policy.  If you look at the investigations that are coming out of some of these news investigations it’s a vital time for journalism.  I’ve seen this reaction in our audience.  People are responding just to journalism.  You don’t need to be a star.  If you can really report and share, people crave [that] because it’s a black box right now in Washington.  What’s actually happening here?  How do you get a grip on what’s happening?”

President Trump “embraces disruption,” Costa asserted.  “He embraces chaos.  He has always surrounded himself with competing power centers.  I used to travel with him on his campaign plane, doing different stories for The Washington Post, and it would be amazing how he would play people off each other, how he would have different people talking to him all the time.  There was never a formal hierarchy in Trump’s order.  So I think this can last four years.  This is how he always manages it.”

Costa said that to really understand Trump, one need look no further than a framed picture of his father, Fred Trump, which once sat on his desk in his Trump Tower office and is now strategically positioned in the Oval Office.  There are very few photos of other Trump family members.  “The president gets all this credit for his positions on trading and immigration,” Costa noted.  “His father had those positions.  In every interview I’ve done with Trump, he comes back to his father’s valued and venerated military culture.  Trump goes to the military academy, at age 15.  Even though he doesn’t serve in the war, he, too, venerates military culture.  You’ve seen this throughout his cabinet.  I really see the influence of the late Fred Trump as the president thinks through this crisis moment in his presidency.”