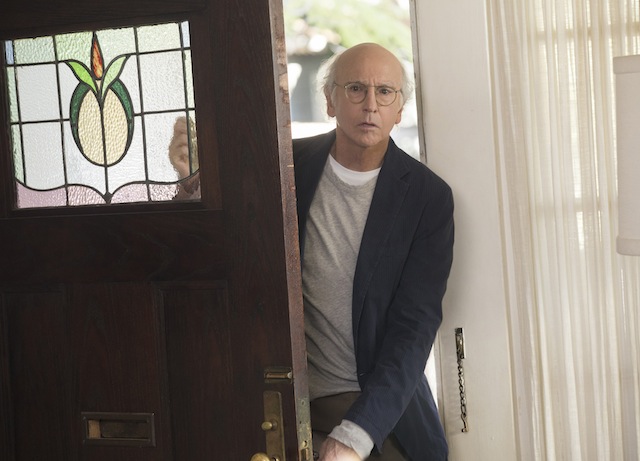 After an absence of six years, Curb Your Enthusiasm is finally returning to HBO this fall for a ninth season.  Its executive producer, creator and star, Larry David, appeared at TCA to promote his show in what was easily the liveliest session during the first week of the 2017 Summer Television Critics Association tour.  He was joined by co-stars Jeff Garlin, Susie Essman and J.B. Smoove and executive producer Jeff Schaffer.  Every answer David gave to every question -- even those that were not intended to be comical -- had the room roaring with laughter.  It's all in the delivery.

For example, when he was asked if TV Larry is going to become lovable at some point, and David replied, "No, he’s not, but that's a fascinating question," the critics lost it.

Asked if he was concerned that our current president, who makes headlines every day and is the subject of endless jokes on late-night talk shows, might be competition for him in the humor department, David replied, "You’re talking to me?"

"The last season was in 2011, so why bring back Curb Your Enthusiasm now?" one reporter wanted to know.

"Yeah," the reporter replied. "Why bring it back now?"

"Why not?" David said, continuing over the laughter that followed.  "I’m not a misser, so to speak," he said.  "I don’t really miss things or people that much.  But I was missing it, so I thought, 'Yeah, what the hell?'  And I got tired of people asking me, 'Is the show coming back?'  I couldn’t face that question any more, and I wasn’t ready to say, 'No, never!'  So I thought, 'Yeah, I won’t have to be asked that anymore.'

"By the way, in the six years since we’ve been on, the amount of uncomfortable situations Larry has been in [during] these last six years, it’s been amazing," Schaffer interjected.  " And you’re going to see it all.  It’s like we’re sitting in the Fort Knox of awkward."

One critic noted that since Curb made its debut other shows have tried to create the same kind of tone with similar characters and wondered if David was flattered or insulted by this.

"I don’t find it insulting," he continued.  "That’s what television essentially is, copying."

"How did TV Larry settle on golf as a sort of relaxing pastime?" one reporter asked, referring to preview clips of the upcoming season that we had just seen.  "I would have thought he doesn’t have the right temperament for it.  How is TV Larry a golf guy?"

"I don’t know if you’re aware of this or not, but TV Larry is just about a quarter of an inch away from real Larry," David laughed, along with the room.  "Real Larry plays golf, so TV Larry plays golf.  See how that worked?"

"Far, far down the road at the end of the tunnel, in the very final episode of Curb Your Enthusiasm, can you confirm or deny that you’re going to have a long episode where everyone that TV Larry has ever wronged will come back to face him?" one critic asked, trying to be the funniest guy in the room, and failing.

"Be honest, Larry," a reporter said.  "Do people avoid you like the plague when they see you in public?"

"What the f-ck?" Garlin interrupted, getting his share of big laughs.  "What are these questions?"

"Why do you think they want to avoid me?" David asked with mock exasperation.  "Unfortunately, they don’t avoid me."

"Does daily engagement or interaction with people provide you with plenty of fodder for the content you create?" another asked.

"A lot of people think they’re always providing me with fodder, but they’re not," David explained.  "All of a sudden I’ll write something down and they’ll go, 'Oh, did I just say something? Did I just give you that?'

Over the huge laughter that followed, one critic said, "Larry, on Finding Your Roots you found out that you were directly related to Bernie Sanders, and I wonder how much of a shock that was for you."

"How do you know that?" David demanded.  "That show hasn’t even been on!"

"They sent me a screener," the critic replied.  "I watched it."

"Is that so?" David mused.  "They told me not to say anything!  I haven’t said a word about this!  You just spilled the beans!"

The laughter was deafening.

Garlin couldn't believe what he was hearing.  "You agreed to be on a show called Finding Your Roots?” he asked.

"I thought it would be cool to find out all that stuff," David replied.

"Anything else cool besides Bernie Sanders?" Garlin wanted to know.

"Yeah. I got Nazis in my family," David said.

Apparently David was kidding.  But he then said of his family history, "There are slaveholders, though."

"I figured that," Smoove smoothly interjected.

A critic interrupted, asking, "Larry, can you address that?  What was your reaction when you found that out?"

"I was very happy about that," David replied.  "I thought there must have been some connection."

“Larry David thrilled to be related to slaveholders,” Garlin said, imagining the headlines that were being banged out on our laptops at that moment.

"Larry, you often seem unhappy about things, but [in] Finding Your Roots you just seemed very happy," a critic said, refusing to let talk of that show end.

"Well, I’m sure everybody’s curious about their roots," David said with sincerity.  "I am human, so I thought that it would be interesting to find out who my relatives were, who my ancestors were.  We traced all the lines and everything, and then they told me later on that Bernie Sanders was part of that line somehow, somewhere.  Probably some distant cousin.  I don’t know.  Maybe a third cousin or something."

Briefly suspending the merriment for a moment to break a little news, David said,  "By the way, Richard Lewis is coming back.  He’s in a number of episodes, and Ted Danson and Cheryl [Hines].  They are all going to be on the show this year."

"One of the things you said about why you did another season is because people kept asking you, 'When is the show coming back?'” a critic said.  "So is the way to get you to do a Season 10 to just start bugging you now?"

"You talked about TV Larry and real Larry," another critic began.  "We know what real Larry has been up to in the past six years.  What was TV Larry up to in between seasons?"