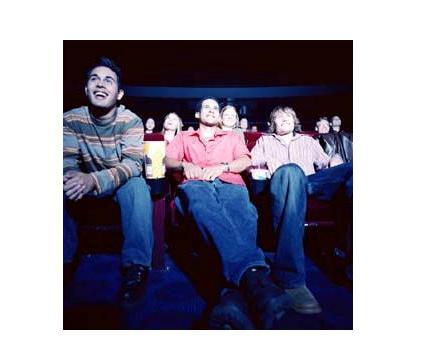 Who doesn’t love “must see TV?” Once upon a time, NBC coined the phrase that came to define appointment viewing — a time to sit down and watch the show that you anticipated all week.

There’s no question that the Super Bowl is the biggest must-see event on TV today, which is why The New York Times Media Equation columnist David Carr’s excellent article about how the Super Bowl Underscores the Big Business of Must-See, Live TV caught my eye on the morning after the big game.

I was especially struck by how right he was in noting that, “It is a fact of modern life that the mass has gone out of media, with television ratings reflecting that each of us is building our own little campfire on our phone, tablet and big screen at a time and place of our choosing.” We’ve all seen the effects of fragmentation in the media industry and know that it is a real challenge for brands to reach a mass audience. Whether it is people time-shifting TV or only watching online/mobile video that meets their specific interests, or getting their news and information via any number of social channels, it is hard to find a common consumer media experience.

Carr is just the latest media pundit to recognize the primal human urge to have something in common to talk about with our neighbors, co-workers, families and even casual acquaintances. You need look no further than live sports, the Oscars, Golden Globes, CMAs or Grammys to understand that live event programming still brings people together to watch content and share it either in person or via social media. However, when he mentioned a big screen, he completely overlooked the biggest screen of all. That same kind of appointment viewing and must-see water-cooler programming is happening every single weekend in movie theaters across the country.

While TV network ratings have dropped, U.S. movie attendance remains strong with 1.34 billion Americans going to the movies in 2013 alone. If you consider the summer blockbuster season to be the Super Bowl of cinema, this past year was the biggest ever with $4,850.4 billion in box office (+12.7% over the previous summer) and +10.3% in attendance.

Just as it is with TV viewing audiences, social media is playing an exciting role in creating even more of a shared experience and buzz surrounding movies. And while live TV events still generate the kind of water-cooler talk and shared experience that used to be associated with all TV, the movies are the king of the ultimate “shared experience” and the “original social media.” In fact, especially for those under 35, being “in the know” on the latest films is an important aspect of social currency, according to the 2013 NRG American Moviegoing Report from Nielsen. 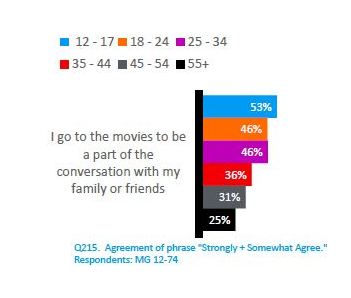 Still, when it comes to a true communal experience, the kind that Carr references in his article, the live experiential and group social aspects of going to the movie theater itself is what really makes the difference to audiences, as illustrated both by Nielsen and past biometric research from Innerscope and NCM Media Networks.

According to the same 2013 Nielsen Moviegoing Report, the big-theater experience and the rituals we associate with it are the top reasons for seeing a movie at the theater, with this being especially true among males and those over 35. Females and those aged 12 to 24 are even more drawn to movie going because it allows them to spend time with their friends and family. 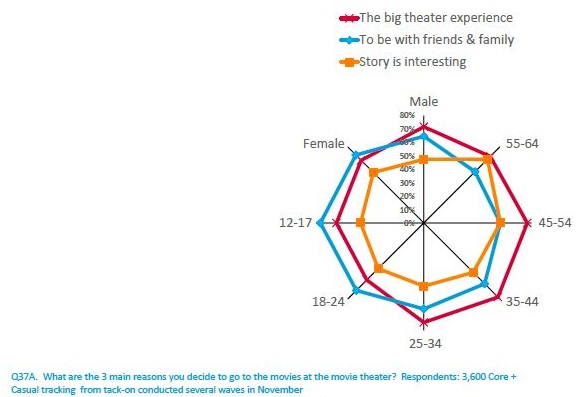 Of course the Super Bowl ratings are in a class by themselves, but other major live TV events such as the Golden Globes and Oscars telecasts would not exist to drive up TV ratings if it weren’t for people going to the movies and falling under the spell of Hollywood stars week after week! You don’t have to have watched every NFL season game to truly enjoy the Super Bowl, but just think about how many people you know who are clamoring to see every Oscar-nominated film before they watch the Academy Awards on ABC on March 2.

I couldn’t agree more with David Carr when he concluded that, “There is, even in an age of individualized media cocoons, a deep hunger for a common experience and all the ritual that accompanies it.” I just think that he, and many others in the media business, simply need to pick their heads up from their small screens and see “the bigger picture.”