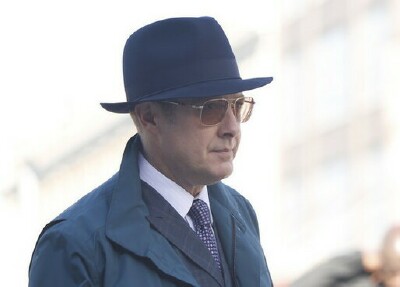 “The Blacklist” never disappoints. Just when I think there is no new display of blood and viscera that can shock me – especially after more than four seasons of inventive zombie slaughter on AMC’s “The Walking Dead” – NBC’s deluxe thriller proves me wrong.

Near the end of this week’s episode, with only minutes to go until the start of the series’ extended midseason break, there was an especially messy killing the likes of which I don’t think I have ever seen, including in movies and on pay cable. I won’t spoil the fun to be had in this latest ultra-violent demise by revealing the identity of the person who perished in a manner most unforgettable – especially to those of us who have been following the career of the actor who portrayed this person for many years. I’ll only say that even though this was one of those very rare instances on “The Blacklist” when the promise of a particularly nasty death was telescoped in such a way as to eliminate any real surprise, I still recoiled when it happened.

And so, I believe, another broadcast barrier has not so much been crossed as literally blown away and left awash in bloody residue. “The Blacklist” certainly isn’t the only network series to consistently top itself in accomplishing this particularly gutsy goal; CBS’ “CSI” and its offspring got there first and opened the floodgates for the same network’s “Criminal Minds,” Fox’s “24” and many more, some among television’s best, others simply detestable in their delivery of all forms of violence, the more brutal and depraved the better.

I’ve never really had a taste for such stuff, which is why I am so surprised to find myself addicted to “The Blacklist,” and happily so. It’s one of maybe five shows on television that I absolutely have to see when it is first telecast or via DVR later that same night (or, under great duress, the following evening). I’m giving series star James Spader most of the credit for that; television just hadn’t been the same since his portrayal of Atty. Alan Shore (on ABC’s “The Practice” and “Boston Legal”) came to an end, and his return last season (when “The Blacklist” premiered) was indeed cause for celebration. His performance continues to add appreciable power to the show, but by now my interest in it would likely have waned had series creator Jon Bokenkamp and his team not so masterfully kept the twists and turns coming (right up to the final few minutes of last night’s episode). Just when one big bad is exposed, another even bigger bad is revealed. And so it goes.

But the unexpected aspect of my continued devotion to “The Blacklist” has been my own personal increased acceptance of its violence. It’s as if I expect the show to top itself in that area week after week, which it doesn’t always do. (Most weeks it simply features a few people being shot in the head or having their throats slit, or other acts of violence that would have once fomented protests but are now thought to be mild.)

I guess it really is true that almost anything is acceptable as long as it is done with great quality and with respect for its audience. In that regard “The Blacklist” remains one of the best shows on television. The ever-expanding plot lines may be somewhat over the top but they are never difficult to follow and they are always grounded in carefully constructed character development. This is especially true of the long tease involving the nature of Raymond “Red” Reddington’s great interest in and compassion for FBI agent Elizabeth Keen (Megan Boone, pictured below with James Spader). And now we know – spoiler alert – that there was (and may still be) a deep connection between Ray and Elizabeth’s despicable husband Tom (Ryan Eggold). 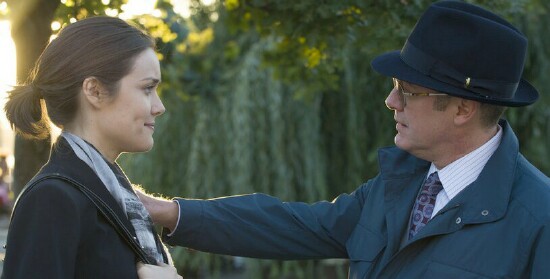 NBC is trying some very interesting scheduling tactics with this show and the time period in which it has thrived since the fall of 2013. As noted above, “The Blacklist” is now on a prolonged break, with a new drama (“State of Affairs”) inheriting that highly coveted post-“Voice” time slot beginning Monday, November 17. The next new episode of “The Blacklist” will be seen immediately following NBC’s presentation of Super Bowl XLIX on February 1.

Considering the adult nature of this show it’s an interesting choice as a Super Bowl follow-up, especially because millions of families gather together to watch the Big Game. I’m certain that, when the game is over, kids will be sent to bed on the East Coast and will dash back to their video games on the West Coast. Further, I’m sure millions of kids are enjoying “The Blacklist” anyway, either with their parents or in secret. Plainly I give too much thought to their well-being.

On February 5 “The Blacklist” will settle into its new time period, Thursday at 9 p.m., where it will be called upon to accomplish two things: Restore some excitement to NBC’s lackluster performance on that night (one the network owned, ratings-wise, for 20 years) and survive opposite ABC’s “Scandal,” one of the most popular dramas on television. I’m certain Ray Reddington can hold his own against the mighty Shonda Rhimes, but she will likely prove his most formidable challenger yet.