The CW at TCA:  “In the Dark” Shines a Light on the Visually Impaired 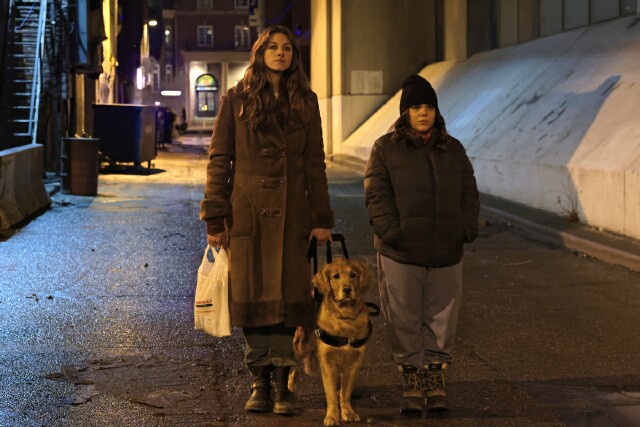 Pasadena, CA -- Speaking at a CW executive retreat forever changed Lorri Bernson's life.  A two-time graduate of Guide Dogs of America, she was there to talk about CW Good's partnership with that organization, and out of her talk the idea for the network’s new series In the Dark was born.  In the series Perry Mattfeld (pictured above, left) stars as Murphy Mason, a woman blinded at age 14 who is now on a path of self-destruction.  Murphy spends much of her time sleeping, drinking, smoking, indulging in casual sex and basically being rude to those closest to her -- including her adorable guide dog Pretzel.  Murphy is also quite brilliant and after her friend Tyson is murdered, sets about to solve the crime, aided by Pretzel, of course.

While the series isn’t autobiographical, Bernson and the Murphy character both share the experience of going blind in their teens.  It’s something Bernson is still adjusting to years later.  “The difference between losing your vision after you've had some vision is mainly mannerisms,” she explained to reporters at the Winter 2019 Television Critics Association tour in Pasadena.  “For instance, if I hear something over in [a certain] direction, I'll go [towards it].  I'm not going to see what the noise is, but it's so conditioned in me to do those kinds of things.

“Then I catch myself and ask, ‘What are you doing?’ she continued.  “People always tell me that I am looking right at them, but I had years to focus on where their mouth is, where approximately their eyes are.  The greatest thing is when somebody moves and doesn't tell me.  I keep talking to them and it's fine.  There are little things that are always going to happen.”

For Mattfeld the show’s subject matter and acting challenge was too enticing to pass up. “This role is an actor's dream," she explained.  “It's a mental, emotional and physical role.  Not only was there a responsibility for me with this role, but [there was so] much I had to learn.  That's why Lorri was by my side the whole time.  I couldn't have done it without her.”

“I spent a lot of time at Lorri's house watching her just do her thing," Mattfeld shared.  "She told me that because she once had sight, now when she watches TV, she will still look down at the remote first even though she's not looking at it; or when she eats, she still looks down at her plate.  [They are] mannerisms that come with [having had] sight."

Before Mattfeld won the role, series producers Nicholas Weinstock and Corinne Kingsbury did consider giving it to a visually impaired actor.  "We went about searching for a blind actor immediately," Weinstock recalled.  "Our casting department went to 29 organizations for the visually impaired to find people, and we auditioned a lot self-tapes, so we saw many, many auditions.

"Ultimately, we went with Perry because she was the best actor for the role," he continued.  "What we fell in love with when it came to Perry was her devotion to the authenticity and doing the homework required for this kind of deep-dive role. She went to the props department and got a cane her first day of pre-production and went around her apartment for weeks doing cane work before we began filming.  Perry basically became Lorri's adopted daughter."

It was during that search of schools for the blind that the producers discovered Calle Walton (pictured top right), who plays the character of Chloe.  "She immediately knocked my socks off when I saw her and continues to do so throughout the season," said Kingsbury of their talented new find.  "She's the most magical, special actor, and I'm just so excited for the role she is in."

For 19-year-old Walton, who lost her sight during her senior year of high school, the series had also changed her life.  "After losing my sight I kind of thought acting's out as it's not going to be too easy to act being blind," she revealed.  "I kind of let go of that dream, so when I got the call saying, 'We'd like to have you in the part of Chloe' it blew my mind.  I remember stopping and being like, 'Whoa.  What?'  I didn't start freaking out until I called my mom and was like, 'Oh, my God, I got the part!'”

In the Dark will premiere Thursday, April 4 at 9 p.m. on The CW.