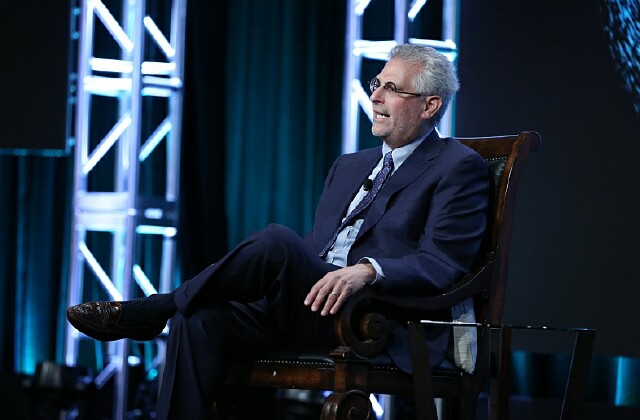 Beverly Hills, CA – The CW will mark its 10th anniversary next month, and while the network did not call attention to the occasion yesterday with a special event at the Summer 2016 Television Critics Association tour, it was in very much of a celebratory mood, largely due to the afterglow of having won is first-ever TCA Award last Saturday and also because its line-up of superhero series has brought a record number of viewers to the network, not to mention outsize attention at the annual San Diego Comic-Con.

CW President Mark Pedowitz had much to celebrate aside from the impending anniversary. The network’s comedy-drama with music Crazy Ex-Girlfriend recently received four Emmy nominations, while its saucy serial Jane the Virgin received one. His excitement over that recognition was tempered, however, by the fact that none of the nominations for either show were in the acting categories or for the shows themselves. The lack of recognition for Crazy Ex star Rachel Bloom is particularly puzzling, given that she has in 2016 been honored with a Golden Globe Award and a Critics Choice Award for her work on the show.

Asked what kind of a statement the network made last spring by renewing almost all of its series, Pedowitz replied, “What it says is what the original strategy has always been:  We want to have year-round scripted programming. [We now have] 15 scripted series. We have the ability to launch [new shows Frequency and No Tomorrow] in the fall, continue launching in midseason with Riverdale and in midseason and summer with The Originals, The 100 and Reign.  I think that’s about the right amount, give or take, of series for us. It gives us the ability to roll into the summer with scripted programming, which I think is important. I think it’s important for advertisers, for us as a network for identity, and it’s important to our affiliates.”

Commenting on the merits of individual series, Pedowitz said, “A show likeCrazy Ex deserves to be picked up. A show like Jane deserves to be picked up. They’re quality programs. And Crazy Ex, I am hoping as with Jane, will get the viewership it deserves” now that it is on Netflix.  We believe that is unique.  Along with The Flash and our other DC superheroes and Jane, it has defined the identity of this network. So if it’s a show that’s going to define us and keep us going and makes sense and keeps us active, we’re going to renew [it].”

Pedowitz later noted that because of its exposure on Netflix, Season 1 of Jane "became our second most streamed show right behind The Flash.”

There was much excitement at the session about The CW’s announcement yesterday that yet another D.C. hero, The Ray, would be featured in a new animated series on CW Seed. Developed and produced by Greg Berlanti and Marc Guggenheim, the Ray will be the first gay superhero to have a series of his or her own on television.  The plan, Pedowitz said, is to eventually to bring the character to life as a live-action hero, whether it’s on Legends, The Flash or Arrow.

Pedowitz is also excited about My Last Days, a profound documentary series about people who have been diagnosed with terminal illnesses conceived and produced by Jane the Virgin co-star Justin Baldoni.  Long before Jane came along, Baldoni began producing this series at his own expense. Now, six new installments will debut next week in a three-night event on The CW and will then live on over at CW Seed.

“We have ordered a second season of My Last Days,” Pedowitz said. “This started as a digital project for CW Good. It was so powerful that Rick Haskins, who oversees CW Good and CW Seed in our marketing efforts [and I] called Justin up and said there’s more to this than just a digital series.  We realized what CW Good could be … Its real heroes, real life.

“I’m very proud of what Justin did and what CW Seed has done and what CW Good has done in launching My Last Days,” he continued.  “It is a very powerful piece of material.”

Without question the highlight of The CW’s day at TCA was a panel with the show-runners from its superhero franchises Arrow, The Flash, D.C.’s Legends of Tomorrow and Supergirl (pictured above). Much earlier in the morning during the session with Pedowitz, one intrepid critic asked him if he understood all the crazy time lines that run through the shows and how they all fit together.

When the laughter subsided, he added, “Sometimes we do have discussions. ‘What did you say? What did you mean?’  Look, I have Greg Berlanti, Marc Guggenheim, Andrew Kreisberg, Ali Adler, Phil Klemmer ... executive producers who think these things through. We sometimes do not agree. Sometimes it gets confusing. Sometimes you are doing things on the fly even when you thought it out. But at the end of the day, of course I understand it.”