The CW's Mark Pedowitz on the Value of Critical Acclaim, Binge Moments 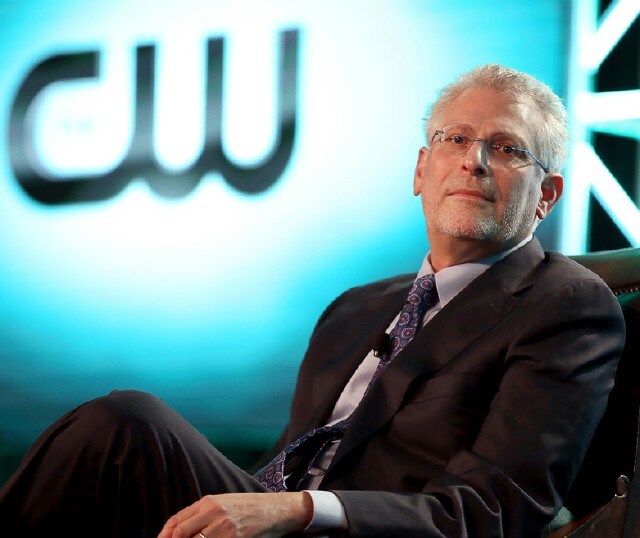 Pasadena, CA – Something happened in the opening moments of The CW’s day at the Winter 2017 Television Critics Association tour that I can’t recall happening at any tour during my 25 years on this beat.  When CW President Mark Pedowitz (pictured above) took the stage to take questions from the press, one critic thanked him for agreeing to an “executive session” – at which point dozens of TCA members began applauding. You may recall the dust-up last month when the top executives at the Big Four broadcast networks decided to not appear on stage and take questions during their TCA days.  (After the brouhaha there was a change of heart at Fox.)  At no time, however, had Pedowitz said he would not do so – and the press appreciated it.

The day had begun with an announcement that The CW would renew seven series for the 2017-18 season, including Arrow, The Flash, D.C.’s Legends of Tomorrow, Supergirl, Jane the Virgin, Crazy Ex-Girlfriend and the unstoppable Supernatural, which will return for its fearsome 13th season.

“As long as [Supernatural] is performing and the boys [series stars Jensen Ackles and Jared Padalecki] want to do it and I'm sitting in this chair, this show has a long life,” Pedowitz said.

Critics took note of the fact that two of the network’s freshman dramas, No Tomorrow and Frequency, were not included on that list.

“We had no intention of going beyond 13 [episodes on those shows],” Pedowitz explained.  “We knew we had five midseason shows to launch, four returning [iZombie, The Originals, Reign and The 100] and Riverdale.  We also knew that we were attempting to have year-round original programming.  It was important to do that.  So unless something extraordinary happened, there was never any intent to go beyond 13. That said, I think both shows are very well done.  Whether it was the presidential election or the World Series, the linear numbers are not where we wanted them to be.  We are seeing some digital numbers.

“The nice thing now for us is, with the new digital strategy for cwtv.com and having a Netflix deal, we'll be able to judge whether or not there's a binge moment [in either show] and see whether or not, come May, we should bring them back.  There is no ‘no’ yet.  So we'll see what happens.”

One critic thought that Pedowitz’ remark about his network’s Netflix deal suggested that the streaming service, which closely guards the actual performances of its programs, tells him how CW shows are doing when streamed.

“There are no ratings from Netflix, but because of our studio partners and owners we do get a sense of what is being done by initiated streams,” Pedowitz further explained.  “So we will have a sense through the months of February, March and April of what's going on.”

There were also questions about the decision to renew the much-honored, critically loved but ratings challenged Crazy Ex-Girlfriend for a third season.

“I know this is going to sound shocking, but it has nothing to do with numbers,” Pedowitz replied.  “Crazy Ex-Girlfriend, Jane the Virgin and the DC franchises have helped alter the perception of what The CW has become.  When you have a critically acclaimed, nominated show like Crazy it deserves to be picked up.  Sometimes you just leave it on the air and hopefully it finds an audience.  I am hoping that happens.  And if it doesn't, I'll have no regrets of having continued the series.”

Prestige shows like Crazy and Jane, he continued, “helped reenergize” the network.  “In today's fragmented world of 455, soon to be 500 some-odd shows, it gives you a calling card.  The CW is here to stay, and that's where the importance lies.  If you deliver quality shows and they're well received, you end up having people wanting to watch your shows.  If people want to watch your shows, you’ll have more viewers, whether [they] are watching on a linear basis, a delayed basis or a digital basis.  [Then] there is an economic improvement.  We are a very strong digital company, as well as a broadcaster.  Now that we control the ad sales of in-season streaming on cwtv.com and the CW app, we have doubled our initiated streams from a year ago.  We have doubled the amount of viewing and almost doubled our ads served to that area. That has become a very strong daypart for us.  That's a better way to describe it.  So yes, having critical acclaim does allow you to get viewers in who may not have viewed your shows.”

Throughout The CW’s time at TCA the foyer outside of the Grand Ballroom at the Langham Huntington Hotel was transformed by the network into Pop’s Chock’lit Shoppe, the soda fountain that has been a hangout for Archie and his friends from the beginning of the franchise to the upcoming series Riverdale.  The detail was phenomenal, and in a smart move this reimagining of Pop’s included a bar that served various zombie-themed coffees to promote the network’s quiet hit iZombie, which returns in April.  Check out these exclusive photos from The CW below. 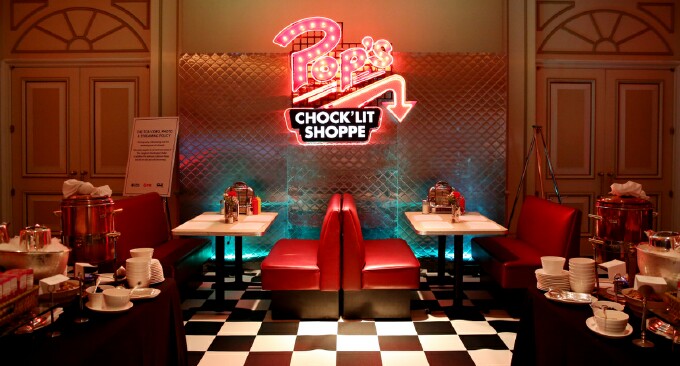 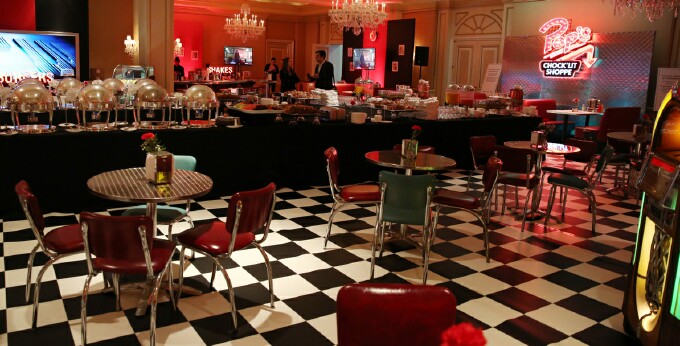