Netflix's "The Defenders" Does Marvel Right 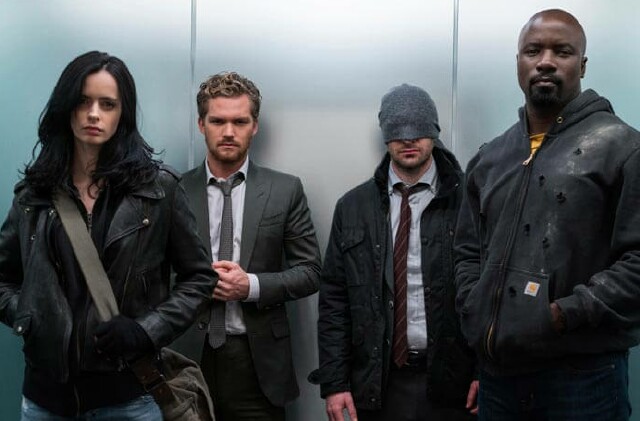 The ever-extending modern Marvel TV universe -- which started with ABC’s Marvel’s Agents of S.H.I.E.L.D.and Marvel’s Agent Carter and continued with the Netflix series Daredevil, Jessica Jones, Luke Cage and Iron Fist -- has hit a high point with one of the most anticipated Netflix series yet, The Defenders.  This limited series, like the superhero quartet it’s named for, does have its issues, but it’s also scrappy, resilient and ends up mostly doing more good than bad.

The first thing I noticed about The Defenderswas the way color is used to define the tone of each character.  Whenever Danny Rand, a.k.a. the Immortal Iron Fist (Finn Jones), is on screen there are electric green tones present throughout the sequence, which is fitting given he’s the youngest and least experienced on the team.  The presence of Jessica Jones (Krysten Ritter) is marked by a dark blue/purple tint reminiscent of her own gritty Netflix series and the gloomy nature of her past. Whenever Luke Cage (Mike Colter) appears he is accompanied by his trademark yellow/gold tint and (more often than not) a hip hop soundtrack that serves as a reminder that he’s the hero of Harlem.  Naturally, Matt Murdock, a.k.a. Daredevil (Charlie Cox), is constantly surrounded by red because he is, of course, the “Demon of Hell’s Kitchen.”  (Ritter, Jones, Cox and Colter are pictured at top, left to right.)

These colors not only persist throughout the series, but also combine subtly based on who’s in the shot.  Whenever Murdock and Jones pair off, so does their red and blue lighting.  The same can be said for Iron Fist and Luke Cage (who actually became a legit crime fighting duo in the Marvel comic books).  Whenever this odd couple separates from the pack, there’s always something both yellow and green in the background of their shots.  The best example of this color-coded trend happens in the third episode when the squad seeks refuge from a sinister and mystical syndicate known as The Hand by hiding in an Asian-style restaurant.  A clever use of lighting and set design allowed the creative team to find an organic way of using all four colors and, besides being beautiful, it also visually signaled the first time the four individuals had intentionally worked as a team.

The Defenders also has a couple of really dope villains and supporting characters. Sigourney Weaver adds some needed gravitas as Alexandra Reid, head of The Hand; Wai Ching Ho continues her amazing portrayal of the surprisingly powerful Madame Gao from Iron Fist, and Elodie Yung, who’s returning from Daredevil as Elektra Natchios, ends up (spoiler alert) being the big bad in the story.

The best thing about The Defenders is that it very cleanly picks up where all four of the preceding series left off in their respective narratives.  This is, to my knowledge, the first time something like that has been done on television, and it’s a real testament to just how different a beast the Netflix platform is.  Sure, over the years we’ve all seen our fair share of crossovers, but having four stand-alone series all lead to one seamlessly united event is unprecedented, and pretty impressive.

All four heroes bring whoever was with them in their own series to this one.  That is easily done with kick-ass nurse Claire Temple (Rosario Dawson) who was in the first two seasons of Daredevil and the freshman seasons of Jessica Jones, Luke Cage and Iron Fist.  Colleen Wing (Jessica Henwick) follows Iron Fist over from his show.  Foggy Nelson (Elden Henson) and Karen Page (Deborah Ann Woll) are imports from Daredevil’s series, and Malcolm Ducasse (Eka Darville) is Jessica Jones’s neighbor/sidekick.  The more hardcore fans giddily noticed the presence of one Misty Knight (Simone Missick), a police officer who, in the comics, receives a bionic arm from Tony Stark and ends up fighting crime as part of a duo comprised of her and the aforementioned Colleen Wing.  Additionally, Carrie Ann Moss (Trinity from The Matrix Trilogy) plays Atty. Jeri Hogarth on both Jessica Jones and Iron Fist, and Rachel Taylor plays Patsy Walker (Jessica’s adopted sister and, perhaps, future superhero Hellcat) on Jessica Jones.

While the series doesn’t disappoint, there are a few misfires.  The biggest is the use of Danny Rand as the focal point for some of the show’s major plot points.  The Iron Fist series is notorious for being the most unpopular of the four shows, in part because of Finn Jones’ one-dimensional portrayal of the character.  (In fairness, The Defenders was likely produced before Iron Fist debuted on Netflix, before the Rand/Jones controversy became a thing.)  Rand’s perceived entitlement probably has to do with the fact that he’s young and whines a lot, despite having what I’d call “Batman money.”  Happily, The Defendersseems to be aware of this fact, and doubles down on Rand’s headstrong personality, embracing his naiveté and relative inexperience (when compared to the rest of the team) as the basis for his character’s arc throughout the season.

My vote for biggest botch, however, goes to the use (or misuse) of Babs Olusanmokun’s character Sowande.  He is arguably the most sinister, intelligent and interesting of the all the baddies present, and could’ve served a much larger purpose than just (spoiler alert) ending up as sword fodder for Daredevil’s mentor, the indefatigable Stick (Scott Glenn).

All in all, The Defenders was worth the wait and seriously warrants a binge.  At a tight eight episodes, it maintains a pace that never gets too slow or feels like it’s been going on too long (a common problem with Marvel’s Netflix shows.)  After seeing it, I re-watched both Jessica Jones and Luke Cage, and have plans to do the same with Daredevil as well.  (Sorry, Iron Fist, I’m still not with you.)

With one currently unavoidable exception (the incomprehensible The Inhumans), Marvel obviously knows how to utilize the properties it still has a legal handle on; so it’s a bummer that some of its iconic franchises like The X-Men and Fantastic Four have been left to other companies.  I mean, imagine a collection of Netflix series each starring a different X-Person, followed by a limited series that brings them together, or a proper Fantastic Four series on Netflix (as opposed to those God-awful movies we got).  In fact, since The Inhumans were supporting characters in the Fantastic Four comic books back in the Sixties and Seventies, perhaps Marvel can redeem the mess it made of them on ABC by creating a great Fantastic Four series for Netflix and adding The Inhumans to that narrative (along with the Silver Surfer, the Black Panther, Wyatt Wingfoot and Galactus -- each of them introduced during the glory days of the Fantastic Four, when it was proudly known as "The World's Greatest Comic Magazine.")

Under the guidance of legendary Marvel mastermind Stan Lee, Marvel was once known as the House of Ideas.  Collectively, The Defenders and the four series that it pulls together feel like a product of such greatness -- and they make clear that superheroes aren’t just for nerds any more.  As Stan the Man would say, “Excelsior!”