The Digital/Retro Dynamic (Or, Why I Enjoyed the SAG Awards So Much) – Ed Martin 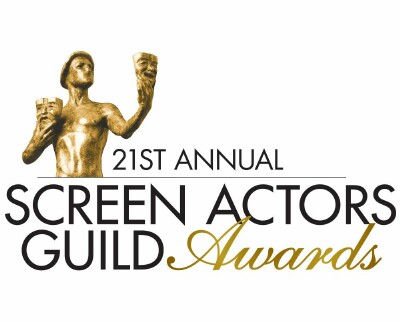 The other night I did something I have never done before … I watched an entire live awards show on a tablet.

The show was the SAG Awards, which is now in the running to replace the BAFTAs as my favorite awards show of the season (more on that below). The tablet – specifically my goddaughter’s iPad – was located on her family’s kitchen table, around which we all sat talking, snacking and taking in every minute of the show. Their deluxe 60-inch high-definition TV was just a few feet away in the family room, but nobody turned it on. Tellingly, nobody ever thought to do so.

It was in every respect a richly satisfying experience. Some credit goes to the show itself. Some of the credit goes to an app available from her family’s media provider which allows customers to watch live television on their tablets. Some credit must also go to the novelty of it all, at least for me.

Given a choice, I always prefer a large screen, high-definition viewing experience with crisp sound over watching something on small devices, which somehow never look or sound quite as good. This is especially true of big live television events. But the SAG situation was something completely different. I think the real reason I enjoyed the experience as much as I did is that it kept all of us watching in close proximity to each other at the kitchen table, encouraging face time (in the traditional sense) and in-person conversation throughout. Had we all migrated to different seats in the family room I am certain that we would have disappeared into our own little zones, focusing intently on the show, multitasking and/or carrying on brief two-person conversations rather than truly watching and reacting to something together.

The SAGs were the first awards I have watched in at least two years during which my focus was not on Twitter. Smartphones did enter into the experience, but generally only to look up information that would augment whatever was happening on the show. For example, my goddaughter reached for her phone to find out more about Debbie Reynolds, the recipient of the night’s Lifetime Achievement Award, while Reynolds' daughter Carrie Fisher was making a speech about her.

Anyway, utilizing state of the art digital technology to gather ‘round a kitchen table and watch the SAG Awards struck me (and the other adults at the table) as reminiscent of the hundreds of hours we had all spent as children watching TV during dinner – usually “The CBS Evening News with Walter Cronkite.” In my family’s case, that involved wheeling our black and white television from the living room around the corner to the kitchen entryway. Like millions of other families we were multi-tasking before there was a word for it, eating our meals, discussing the events of the day, watching Cronkite deliver the news and sometimes even discussing the stories he was talking about (mostly those concerning coverage of the Vietnam War, an ongoing nightly television program of sorts for the generations alive at the time).

I love telling my godchildren about the glory days of three-network, black and white television. They recoil in horror at the thought of so few choices – and they generally refuse to watch anything in black and white, which I am coming to understand as an unfortunate failing of many Millennials. I use the term “glory days” because even with the viewing limitations of the time, which typically included CBS, ABC, NBC, PBS and a handful of local independent stations, it seems in hindsight that there was always something to watch (including dozens of great movies of every genre). I have approximately 200 channels available to me today and I swear there are times when I can surf past every one of them and not find a single thing that I am interested in. But I digress …

It hadn’t occurred to me that I would ever again enjoy something so closely approximating the kitchen viewing experiences of my long-ago childhood. But watching the SAG Awards with loved ones gathered around an iPad at a kitchen table was exactly that.

As for the SAGs themselves, it was once again an absolute pleasure to watch an awards show that wasn’t egregiously compromised by mindless banter by one or more hosts. The show was in every way all about the nominees, the nominated movies and television series, and the integrity of acceptance speeches that result when winners know not to talk too much and aren’t being hurried off the stage. It was especially satisfying to see Viola Davis of ABC’s “How to Get Away with Murder,” William H. Macy of Showtime’s “Shameless” and Mark Ruffalo of HBO’s “The Normal Heart,” as well as the entire cast of PBS’ “Downton Abbey” receive recognition from their peers. Sometimes actors really do know best.