By Bill Harvey September 10, 2014 In Terms of ROI Archives 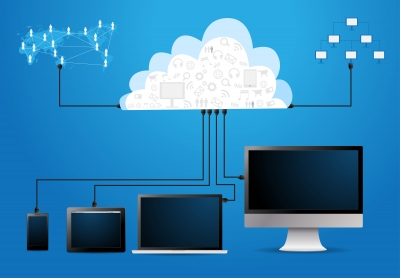 Raise Ratings and ROI by Integrating All Key Purchaser, Attention and Emotion Drivers

Be Sure to Read PartsOne,Two and Three in This Series.

In this series I am providing more in-depth coverage of the information contained in theCBS presentation thatDave Poltrack and I delivered at the recentARF Audience Measurement Conference. Based on multiple studies from very different sources (Turner/Ipsos/Innerscope and Symphony Advanced Media) and methodologies, we reported that there is a positive effect on attention, engagement, eyes on screen and advertising recall associated with concurrent electronic (or in-person) socializing while watching TV.

We recommended that the classical method be used to take advantage of this new knowledge, namely the use of “qualitative” index weights on the CPM equation designed to maximize ROI. We pointed out that TiVo Research/TRA has already quantified the ROI impact of its purchaser indices (True Target Index/TTI) as 0.7, i.e. for every 10 point increase in a campaign’s overall TTI, look for a 7 percentage point increase in ROI on average.

We estimated that the attentional factor of socializing (and the negative factor of playing games while watching TV) would, when used as index weights in the same way, have a 0.4 calibration to ROI, i.e. for every 10 percentage point increase in the factor reflecting “social minus gaming” there will be about a 4 percentage point increase in ROI. However, I admitted that we would not be surprised to be surprised if the attentional factor could have more impact than the purchaser factor.

Also in the same ARF presentation Dave Poltrack and I presented an emotional factor, as measured by Affinity Answers. Sree Nagarajan’s company processes 9 trillion affinities each week spidering through the entire U.S. census of Facebook and Twitter behaviors, looking specifically for actions and posts related to TV programs, brands, actors/actresses, musicians and other key variables of pop culture. In this way they are able to see which TV programs are most liked and behaviorally engaged with by people who like and behaviorally engage with your brand online. This appears to be the first opportunity in history to apply a big data emotional variable in TV media selection.

For example, there is a very strong affinity between the brand Ziploc and the TV show NCIS: The same people who post things about NCIS also post things about Ziploc and/or its commercials; the people who do both are a group more than twice the size that would be expected based on random overlap. This is reflected in the 238 Affinity Index in the table below.

This table emblemizes our vision for the programmatic future, the kind of a media selection system that automatically maximizes return on advertising investment without making any culture or workflow shift necessary because it is so in line with our own conventional TV buying system paradigm today. All metrics other than the audience size are combined into a single value weight that has been pre-calibrated to ROI. In other words, each column gets the weight that it has earned in ROI trials. This produces the single-quality column required by Mediaocean, hence no need to change anything difficult to imagine changing. Until we have API pipes that do it all, we can handle everything in Excel prepping data from diverse sources, lining everything up with the Nielsen program titles and conventions. The simplest and easiest approach is to optimize against three things at once: lowest CPM against the buying target, highest reach against the buying target, and highest compound value index. This approach is described in detail in this post, using an automotive example.

Further in the future when it is more convenient to change systems, all of those separate payoff variables can be combined into one -- a more elegant way of doing it while providing almost the same media buys. In the nearer future each brand can improve upon this general approach by recalibrating the selection variables (purchaser density, attention, emotion) with ROI for their own brand, creative executions and constantly updating these relationships over time within a multidimensional, multilayered, programmatic all-media optimizer that reads the results and tweaks the buy accordingly in real time 24/7. 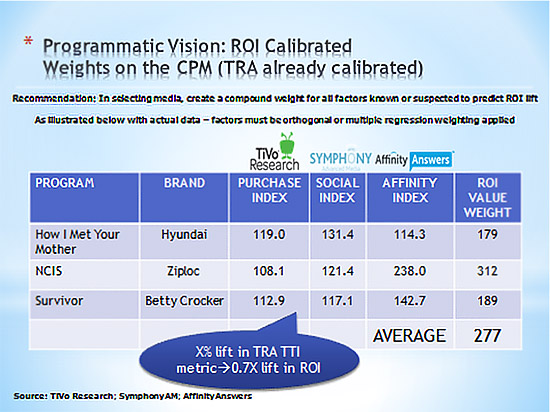 But this is not yet enough. There is at least one more trick to be played. As we reported earlier in this series, when the brand being seen on the TV also posts content on the second screen the user is using, at the same time it is on the TV, brand favorability more than doubles. Executing this currently takes creative and media bandwidth, although technology exists, notably WiO, which takes the pain out of the technical end. Until WiO integration into all networks, with a Wio authoring tool to simplify the massive scaleup of across-screen brand simultaneity, brands will tend to pick their shots to find just the right program in which to start experimenting.

The Affinity Index, Purchaser Index, high Socialtasking and low Gametasking are four metrics that can be used to speed the selection of the right program(s) in which to start your own sally into across-screen advertising. Better start soon, while there’s still time to gain temporary competitive advantage.