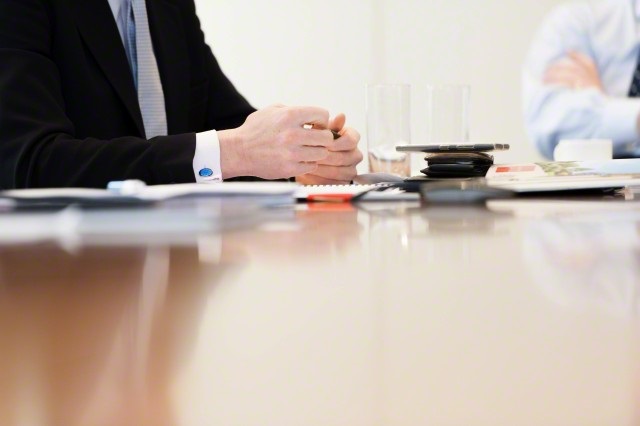 This is Part 1 of a series of blog posts predicting the next three years and the further wrenching changes to which we can truly look forward.

The past few weeks have seen a predictable turnaround in the press perception of the future of television. TiVo Research has been reporting that TV outsells and lifts ratings more than digital for years, as has Dave Morgan, CEO of Simulmedia. It was only a matter of time before the press and Wall Street would catch up with these facts. And in the past few weeks, Symphony Advanced Media has begun publishing its VideoPulse service, counting the many viewers missed by Nielsen and agreeing pretty well on the ones both companies measure. This has proven the widely suspected fact that despite the apparent collapse of TV audience in Nielsen data, nothing could be farther from the truth. SMI CCO James Fennessy’s recent blog showed that TV ad sales could not be healthier in their present strong rebound, built upon the factual ability of TV advertising to cause sales beyond any other paid media advertising force on Earth. And the true leaders like Dave Poltrack at CBS and Howard Shimmel at Turner continue to bang away at proving TV ROI.

The return to sanity as regards TV skies falling does not mean that the future for TV is going to be as lush as in the past. There is a horde of competition coming from everywhere, including people in technology companies rolling in dough. Money is a valuable thing to have when one is trying to lure the relatively few proven still-hot talents in the creative community of the world. There is going to be a move to become more of a content creator than a distributor, as the price war among distributors continues mercilessly.

TV will get a boost when it fully monetizes addressable commercials, which will have the effect of more than a 30% increase in the total amount of the top line heading into television. This is both because they will attract small business as well as big, and because the math works that way. The table below shows that the seller more than doubled his money from the sale of one spot using optimized addressable commercials, despite lowering the CPM against the true target audience to all of the advertisers. (I am happy to take anyone through the table by phone.) These independent articles also agree with the idea of a significantly increased pie as a result of addressables: Scientific Atlanta and Sanford Bernstein. The Scientific Atlanta forecast is $15B per year incremental to MVPDs. Next Century Media’s forecast was $22B. 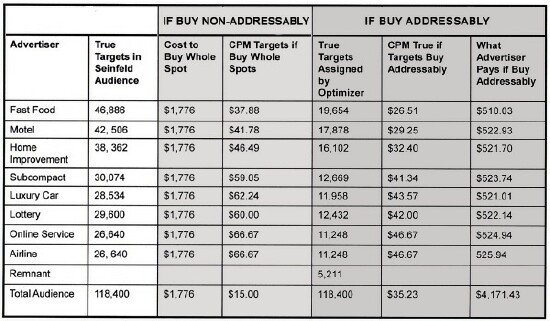 What has held addressables back since they were first introduced by Next Century Media in the early 90s is confusion. Many people today still think that when you buy addressable TV commercials you pay a premium. Frankly, if you walk in the door that way you will probably wind up paying a premium. As the inventor (I first wrote about them publicly in 1979 before introducing them commercially in 1990), I have always seen addressables as a win/win for the seller and buyer: just look again at the table above. The seller has increased spot sales +135% (more than doubling) while the buyer has on average received a 30% discount on CPM against their brand’s heavy category purchasers.

In 1996 John Hendricks and I co-founded the Addressable Advertising Coalition, which was endorsed by Bob Wehling, the CMO of P&G and Phil Guarascio, the Vice President of Advertising at General Motors, and was joined by all of the top 20 agencies, many other advertisers, networks, MVPDs, set top box manufacturers, 4As, ARF, ANA, CTAM, et al. Today the most centrally placed member of the AAC is Lyle Schwartz at GroupM. GroupM’s Chairman Irwin Gotlieb and Modi head Mike Bologna, and Publicis’ Senior Vice President Innovation Tracey Scheppach, are three of the leading teachers and two of the biggest buyers of addressable commercials today. They will only buy addressable commercials at a discount -- not a premium on the CPM against the real target to which the addressable buy is constrained. This was an AAC dictum Lyle, Bob DeSena, Fred Sattler and many others helped us write in 1996. It has taken so long for addressables to roll out to ~43% of US TV Homes we had almost all forgotten why we were doing them in the first place.

In the next post: The exceptions to the rule in pricing addressable commercials.