By Bill Harvey December 17, 2015 In Terms of ROI Archives 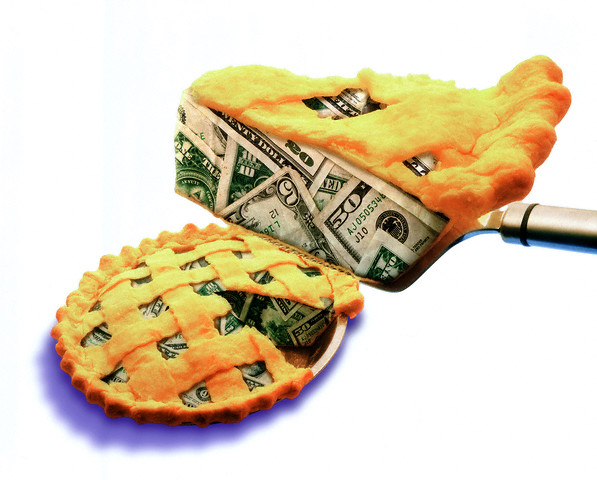 Can the TV pie grow? The two top prognosticators in the forecasting of future ad revenues are (to me and many others) Jack Myers and Brian Wieser. Now that SMI exists, these two industry powerhouses are working with even harder and faster data, further increasing the value of their guidance. It’s interesting therefore that last week I had an interesting series of email exchanges with Brian that revealed at least one small detail on which we don’t seem to agree. Brian feels that the size of the TV pie is not likely to ever change. I feel that addressable commercials could be a "pie expander" for (whatever we are going to call) TV/video advertising.

The way it would work is by bringing in advertisers who have not been in TV before. According to Advertising Age,half of all adspend comes from companies below the top 200 advertisers; however, for TV advertising, the top 200 account for 74%. The below-200 group is in the millions of companies that could afford to get into TV once there are addressable commercials at sufficient scale, and when workflows have adapted to the natural conservancy of business cultures, i.e. it isn’t a pain to buy.

Sellers of addressable commercials should assemble lists of below-200 advertiser prospects and make contact. Whereas large advertisers and their agencies will not see the value of addressable commercials unless the CPM against the target goes down, a small advertiser will look at this differently. For a small advertiser, right now, it is the absolute cost of going into TV that stops him or her. However, the same advertiser may be paying $1 to $2 per direct-mail piece delivered, and the alternative to consider is to pay a similar amount to test TV as part of the usual small budget.

Small advertisers are of course doing this today with digital video, but digital video does not have the ROI of TV. The same advertisers already testing digital video will want to test addressable TV. And because of it's recently though belatedly being perceived accurately again as an ROI powerhouse, perhaps we should keep calling TV what it is: “TV.”

Let’s illustrate this with a simple example. Say that a major car company has evidence that New Car Buyers are 20% of the total population and are the best target to use for advertising. (We would argue this target needs to be honed down to specific types of cars but let's leave that aside for simplicity.) The company buys TV at an average CPM of $10, but since it doesn’t have great tools for targeting New Car Buyers, the CPM the company winds up paying for New Car Buyers is about $50, about what you’d expect with random buying. If you look at big car brand schedules through something that uses actual individual household car registration data like TiVo Research (TRA), you’ll see this randomness (index=100) is the picture one generally sees in major car brand schedules.

The argument to get a top-200 advertiser company to use addressable commercials is simply to lower that $50, or whatever the normative CPM currently is for the advertiser against the true target group of purchasers. I emphasize purchasers because while many other types of targeting exist, only purchaser targeting maximizes ROI. Everything else leaves money on the table.

How much bigger could the pie be expanded for TV by addressable commercials? First of all, the limiting factors need to be removed. The obvious one is penetration, where today fewer than half the homes in the country can be reached by addressable TV. The less obvious one is inventory, e.g. in many homes that are covered theoretically by addressable TV, the only places you can currently slip those ads in are in free VOD viewings.

For higher-rated fare, the VOD percentage of the audience can be as much as 18%, especially if you are targeting Millennials. For example, among Millennials, 18% of the viewing of “Scream Queens” is by VOD according to Symphony Advanced Media’s new VideoPulse service, which is now the only national passive measurement of the total TV audience across all platforms. However, in general the VOD inventory is small as compared with linear television, which is where the scale is needed. MVPDs can easily remove these restrictions as soon as they start seeing that addressables are the biggest single upside in their grasp.

Next Century Media, as reported in our prior post, had forecast in the early 90s that addressables could bring $22 billion more into TV in the US annually in full rollout. A large percentage of this was forecast to come out of direct mail, with smaller impacts on all other media, and a small expansion on the number of unique advertisers.

Also reported in our prior post, Scientific Atlanta had come up with an independent estimate of $15 billion per year incremental to TV.

The logic is that large advertisers will appreciate being able to lower the CPM against their ROI Driving Target, and small advertisers will appreciate being able to startle their prospects into paying attention by reaching them through TV as well as direct mail. This is pretty simple logic, and I’ve been saying it since 1979. (I’m pretty hoarse!) However, I see smart people at all the MVPDs, networks, agencies and advertisers who totally get it, and many are already batting down the doors of small businesses, offering sexy advanced advertising opportunities additive to addressable targeting.

Ben Tatta, President of Cablevision Media Sales, says, “We recognized the power of addressable advertising early and moved swiftly to deploy it across our entire footprint by 2010. This combination of census-level audience data and addressable advertising is a game-changer for campaign ROI and effectiveness, opening the door for any brand to benefit. Now, whether the client is a large national brand or a small local merchant, the results are equally significant and impactful, while measurable in a way never before possible."

The next three years could show even more TV growth if we move a little faster addressably.