“The Goldbergs” – The Next Great Family Franchise 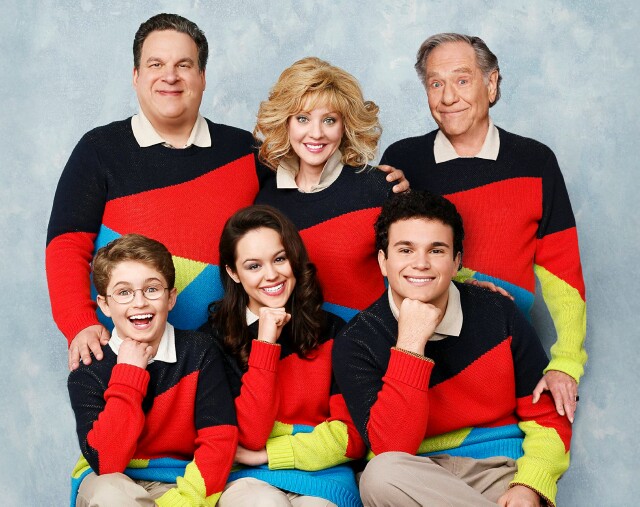 Situation comedies have long been part of our cultural DNA.  From Seinfeld to The King of Queens, or in more recent years The Big Bang Theory, these programs have earned their iconic legacies over time by appealing to new viewers while also offering opportunities for advertisers to reach broad audience segments.

Sony Pictures Television has the next natural member of this franchise fraternity in The Goldbergs, which is entering syndication in fall 2017. The Goldbergs is currently enjoying its fourth season on ABC with more than nine million people per week now watching the antics of the title family in 1980s Jenkintown, PA.  It is ABC’s anchor program on Wednesday nights, kicking off a two-hour comedy block. (Pictured above, clockwise from top left: Series stars Jeff Garlin, Wendi McLendon-Covey, George Segal, Troy Gentile, Hayley Orrantia and Sean Giambrone.)

At the midway mark of this 2016-17 season, The Goldbergs is the third most-watched comedy among adults 18-49, according to Nielsen data*, putting the series in good company behind broadcast network stalwarts The Big Bang Theory and Modern Familywhile topping them for better co-viewing among A18-49 with teens/kids.

The Goldbergs’ entry into syndication will benefit from a strong launch partner in Tribune Media and a 98% national distribution footprint. Timeless family dynamics and universal experiences, wrapped in retro pop culture, make the case for Tribune's commitment, notes Sean Compton, the company's President of Strategic Programming and Acquisitions. "The Goldbergs’ funny, relatable, family friendly storylines appeal to both viewers and advertisers,” he says. “That broad appeal plus growing ratings makes it a great fit for our stations.” Local stations are expected to carry the series in early fringe, prime access and primetime time periods, capitalizing on the series' broad family appeal.

With a TV-G rating, The Goldbergs offers an ideal environment for families, benefitting advertisers looking to reach both their primary and secondary audiences.  Sony will sell a limited amount of national advertising time per episode (two minutes), with coveted A&B pod positions, allowing for less commercial clutter and solid commercial ratings retention. They will also have a 60-second national pod, allowing for custom branded content opportunities. (Advertisers can expect The Goldbergs to deliver an average of 94% live viewing, which is consistent with the strong real-time viewing patterns of Sony’s other syndicated comedy series.)

"The Goldbergs is great for advertisers because of its versatility in delivering key demographics, and starting this fall, it will deliver this audience consistently for 52 weeks a year," says Stuart Zimmerman, Executive Vice President of Advertising Sales for Sony Pictures TV. "It's been a top performer for ABC wherever it's been scheduled and will add to our portfolio of proven comedies that includes Seinfeld, The King of QueensandRules of Engagement.”

Dave Campanelli, Horizon Media's Executive Vice President and Director of Video Investment, confirms: "We are excited that The Goldbergsis entering the syndication marketplace.  Not only is it a great comedy, but it also delivers strong co-viewing which tends to drive audience.”