TBS' "The Last O.G." -- Comedy Curated for the Culture 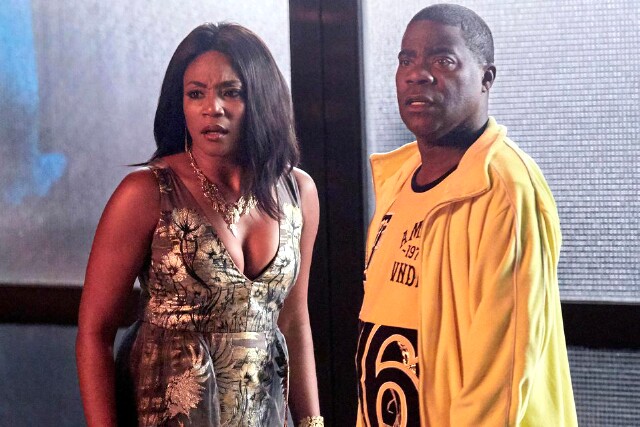 TBS’s The Last O.G., the most recent project brought to the small screen by creators Jordan Peele and John Carcieri, is nothing short of a masterpiece.  I was fortunate enough to screen the first three episodes at TBS’s premiere party for the series just last week, and to call what I saw impressive would be a huge understatement.  Starring the legendary Tracy Morgan, the amazing Tiffany Haddish and king of comedy Cedric The Entertainer, this show isn’t just for laughs; this one’s for the culture.

The Premise:  Tray (Morgan) and Shay (Haddish) were lovers who called Brooklyn circa 2003 their home.  Tray, like many a man from “the hood,” was a drug dealer, and during a seemingly routine transaction gets himself arrested, much to Shay’s chagrin.  She warned him not to do that fateful deal, an admonishment he chose to ignore, and the result was a 20-year prison sentence.  Fifteen years later Tray is back on the streets, and having been released for good behavior, appears to be a new man.  He hasn’t seen Shay in years, but still considers her his true love, so he tracks her down.  Unfortunately for him, Shay moved on with her life while he was away and in doing so moved on from him as well.  Adding insult to injury, Tray finds that his ex-bae not only married Josh (Ryan Gaul), a successful white man, but also had fraternal twins who are quite obviously not biologically her husband’s.  Now he desperately wants to be the man he needs to be to be in his children’s lives, but he’s got a lot of work to do first.

Thoughts on Tray:  The story of Tray is not a new one, but watching Tracy Morgan in this particular fish out of water story is entertaining as f**k.  Viewers get an inside look at the pitfalls that await newly released ex-cons which include, but aren’t limited to, difficulties finding work, being out of touch with social and technological changes that happened while they were incarcerated and dealing with overbearing and judgmental half-way house directors, like Mullins (Cedric The Entertainer).  Since Tray has been gone Brooklyn’s been gentrified, and the people and cultures this iconic borough used to represent have dramatically changed.  This is of course captured by Tray’s hilarious exclamation on his first day back in the street, “What happened to Brooklyn?”

Make no mistake, Tray is an undeniably good man, and it’s the heart that Tracy Morgan brings to the character that really helps viewers fall in love with him.  Going on this journey with Tray is fun, if nothing else, because of what Morgan brings to the screen, but it’s the effort he puts forth in his attempts to be a better man for his family and (how he sees it) his woman that really help instill a feeling of empathy for him and his plight.  With so many hurdles in this man’s way, it’s easy to see how other brothers in his scenario could find themselves on the path of least resistance, which usually leads right back to prison.

Thoughts on Shay:  Tiffany Haddish’s role, while comedic, was still a lot more serious than I expected.  She is a woman scorned, one who’s done a lot of work to leave behind the life that claimed her relationship with Tray, and she’s not keen on letting him destroy the progress she’s made. This is the core of the show’s drama.  Tray is legitimately doing everything in his power to stay on the straight and narrow, establish some sort of relationship with his kids, and remind Shay that even though the life they had before wasn’t ideal, it was when they were their truest selves, and they were truly happy.

Time however, doesn’t heal all wounds, and Shay’ll be damned if she lets Tray remind her of all she left behind. She apparently hasn’t been to Brooklyn in a while either, as evidenced by her interaction with a charity worker who startles her in her old neighborhood after which she immediately throws dukes up and yells, “Get the f**k back fo’ I knock yo’ ass out bitch!”  Poor guy was just trying to save the polar icecaps.

My issue with Shay isn’t her anger.  Let me be clear: this woman, and any woman in her situation has the right to be angry.  That said, I do take issue with two main things: 1) She never told Tray about his children, even though she’s had at least 14 years to do so, and 2) She specifically tells Tray to make something of himself if he wants to be around his kids yet blocks him harder than Dikembe Mutombo at every turn.  Tray may be a felon, but she knew him better than anyone else, and the show has made it pretty obvious that he’s always been a good dude, albeit a bad decision-maker.  He, and the twins -- Amira and Shazad (Taylor Mosby and Dante Hoagland, respectively) -- deserved to know about one another.  So … not cool, Shay.

Additionally, stereotypically someone “like Tray” wouldn’t want to be bothered with her, or her kids, or that white boy she married, but here comes Tray trying to be all he can be -- for them.  Why shut him down?

The Verdict:  Overall, The Last O.G. is beautiful, and I mean that in every way possible.  Tracy explicitly shouted out the show’s director of photography at the premiere, saying the show looked very much like a movie, and you know what?  He’s right.  Besides the fact that the cinematography has seriously raised the bar for single-cam comedies, the characters depicted are well rounded, hilarious and uber-likable.  The writing is clever and honest, and the supporting cast is the proverbial icing on the prison cake.  This show wouldn’t be what is it without the likes of black-ish’s Allen Maldonado, who had me in literal tears at times.  At the premiere, the cast and crew seemed to revere one another as family, and that love can be felt throughout the entire production.

30 Rock aside, after having survived a fatal accident, putting out an amazing comeback stand-up special and then starring in what will undoubtedly be the best 30-minute comedy of the year, it’s clear that both on screen and in real life Tracy Morgan is truly the last O.G.