“The Mandalorian,” on Disney+, Takes “Star Wars” to Yet Another Level 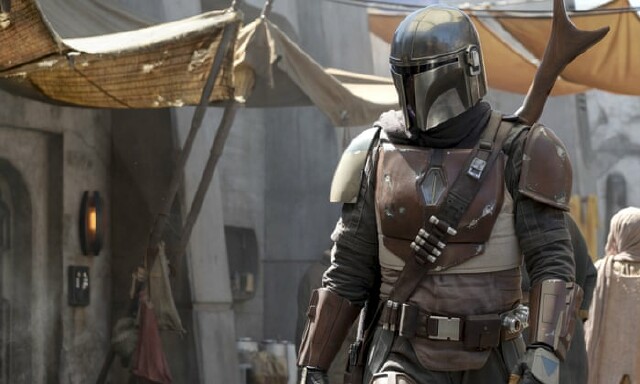 Last week Disney+ joined the streaming world, and with its debut came The Mandalorian, the first-ever live-action Star Wars television series.  Written and created by John Favreau (Iron Man, The Lion King), and starring Game of Thrones’ dashing Pedro Pascal, the series is set just after the fall of the Empire and follows the title bounty hunter on his dangerous exploits through an increasingly lawless galaxy. In no time at all, The Mandalorian has established itself as a masterclass in how to breathe fresh, new life into an ever-expanding franchise that has existed for over 40 years and look cool AF while doing so. Honestly, I haven’t felt this good about Star Wars with no lightsabers since Rogue One came out.

The Mandalorian follows a yet-to-be-specifically-named bounty hunter from an ancient race of revered warriors called Mandalorians.  There’s a lot of history there, but long story short, after a divisive civil war the Empire pretty much wiped them out and took all the precious metal their armor is made from, making it priceless in the process.  In the first episode, our hero is offered a large cache of this metal in exchange for his next bounty, but (spoiler alert) his target turns out to be … wait for it … a Yoda baby!

The second episode picks up right from that reveal and follows our new duo through some dangerous territory.  In an effort to avoid further spoilers, I’m going to talk around that.

First off, this series looks amazing.  Our hero’s armor is a joy to look at, with its sleek helmet lines and that worn and beaten look that everything seems to have.  His ship -- which appears like a repurposed drop ship from the Clone Wars -- has the same type of “used yet futuristic” aesthetic as the Millennium Falcon.  His weapons, his clothes, everything; it all feels like it’s got history to it.  The same level of care obviously went into rest of the casts’ wardrobe as well, because every alien bar patron, shopkeeper, random droid and stormtrooper is authentic looking enough to be on the set of a feature-length Star Wars film.

Yes, this is an officially licensed Star Wars project, but TV budgets are usually miniscule by comparison.  That said, this is Disney we’re talking about, so I’ve no doubt the company’s deep pockets got put to good use; specifically, in the VFX department.  The big monsters in this series, the wild creatures our hero encounters, are not only mostly new to the Star Wars canvas but are also full CG at times.  This would normally raise a red flag when considering what the combination of full CG monsters and a TV-level budget usually bring us, but again, Mickey’s pockets.  This means whenever we see a giant CG creature break through CG ice water and bite-grab a fully CG spaceship all in one shot, it not only doesn’t look like trash -- it’s frikkin’ amazing.

And before we even talk about the amazing helmet-covered performance that Pedro Pascal’s giving (we literally never see his face), or the top-notch voice work Nick Nolte does as Kuiil in the first two episodes, we’ve got to talk about the action andthe lack thereof.  The Mandalorian feels like a space-aged western, which is kind of what the entire SW franchise truly was at its core when those first three films came out several decades ago.  In that vein, there are plenty of moments, especially in the second episode, where there’s no dialogue whatsoever.  In fact, I have a feeling that dialogue will be used as sparingly as possible throughout the series, much in the same way that most of the main character’s thoughts and feelings are conveyed through his expression-hiding helmet.  These dialogue-less beats allow things like the score (created by musical genius Ludwig Göransson) to take over and let the show’s driven yet mysterious vibes control the scene.

When there is action, and there is plenty of that, too (especially in that second episode), it hits hard.  The opening scenes of both episodes took all of 30 seconds to get us into a fight and, yeah, while I definitely watched a guy with a cape beat the space hell out of three or four green-faced aliens, it all felt … very real.  There are no lightsabers here (so far).  It’s all blaster shots and fist fights, and the stunt work really sells it (on top of the snazzy effects).  That’s the trick with Star Wars that The Mandalorian figured out: the suspension of belief is already built into the franchise; you just have to not ruin it.

I know, I know.  What could possibly ruin Star Wars?  Ever heard of Jar Jar Binks?

After the first episode, I knew The Mandalorian was something special.  It very neatly fit into the franchise’s aesthetic, and I love how it created something I’ve never seen using elements that we’ve all been familiar with for most of (or all of) our lives.  After the second episode, I realized just how special this thing could be.   It is going to be one of the great flagship television series (a la Game of Thrones) and, if the force stays with us, the progenitor of a slew of equally high-quality spinoffs.

Above all, The Mandalorian takes itself seriously, which is most probably thanks to its mastermind, John Favreau.  He’s a true fan, on top of being an epic storyteller.  If anyone is going to make sure that the best possible stories are put on our screens, it’s him.  Just look at what he’s doing with this one.  For those of us who enjoy a good nerdgasm, this feels like the television event of the year.