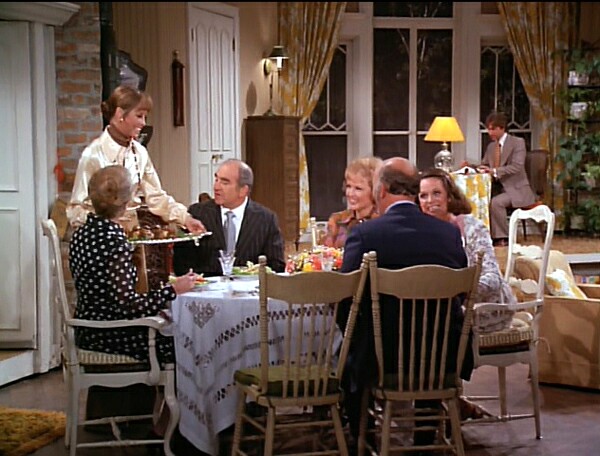 A couple of weeks ago on a Thursday afternoon I received an urgent e-mail from my friend and colleague Marc Berman asking if I received Decades, the new retro programming channel. I didn’t know, I replied. Remembering that we were customers of the same cable company, Marc urged me to immediately click to channel 112. “You’re missing a ‘Mary Tyler Moore Show’ marathon!” he exclaimed, his excitement palpable even via e-mail.

I won’t waste time complaining here about how challenging it can be to keep up with the constant programming changes at all cable companies or their relative failure to educate customers about such things. (And don’t even get me started about the ever-changing details on their monthly bills!) I knew that Decades was scheduled to launch on Memorial Day, but I didn’t know I had it. As a big fan of the retro channels Me-TV, Antenna TV and Cozi, I found myself wondering what it could offer that the others didn’t. I have since discovered that Decades distinguishes itself from the rest by offering in addition to old movies and classic TV shows much original programming about the history of television and history in general – all filled with priceless clips and/or vintage newsreel or television news footage. Also, Decades has a smart and easygoing on-camera host in former CBS newsman and A&E host and current NPR personality Bill Kurtis.

I can’t think of a better way for a new retro network to grab my attention and keep it than with a marathon of “The Mary Tyler Moore Show,” my all-time favorite television series and one of the top three on my personal list of Best TV Shows, where it sits in the No. 2 position between “I Love Lucy” and “All in the Family.” (Sometimes my favorites aren’t necessarily shows I consider the best, “Green Acres” being one example.)

Marc Berman, whose daily newsletter TV Media Insights and companion Web site are must-reads for thousands of media industry professionals, understands this. Often, between sessions or during lunches at the twice-annual Television Critics Association tours the two of us will begin talking at great length and depth about various “MTM” episodes. There is no downplaying the impact this series made during its run in the Seventies (and during the Eighties in the tri-state area, when WNBC ran three episodes every night from 1:30-3 a.m. immediately following “Late Night with David Letterman”). If you watched it then you know what I mean. If you didn’t, get your act together and start bingeing now! It will be one of the most rewarding binges of your life.

Culling from an embarrassment of riches (because almost every one of its 168 episodes was a gem, with a few exceptions during its last two seasons), Marc and I agree that two of the very best “MTM” episodes are “The Lars Affair” and “The Dinner Party,” both from the show’s fourth season – and both included in that marathon on Decades.

When people talk about the series today they tend to point to “The Last Show” (the series finale) and the episode titled “Chuckles Bites the Dust” as its very best efforts, and also two of the best episodes of all sitcoms in the history of television. I don’t disagree that they are brilliant, but I think “The Lars Affair” and “The Dinner Party” are even better. In fact, I believe every person with a serious interest in writing, producing or directing television comedy ought to be required to study those two episodes, if not every episode in the series. 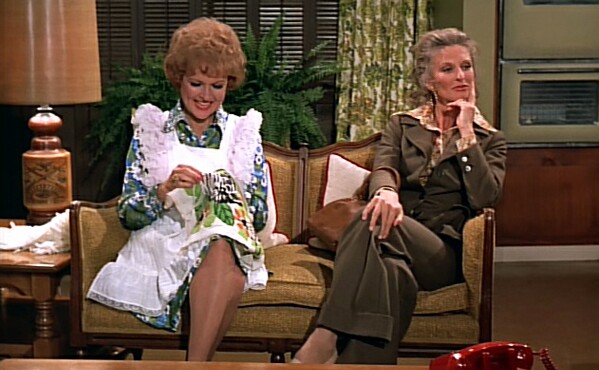 “The Lars Affair,” which opened the fourth season of the series, finds Mary’s friend and neighbor Phyllis (Cloris Leachman) coming unglued when she learns that her husband Lars (who was never seen on the show) is having a torrid affair with the star of WJM’s “Happy Homemaker” show, Sue Ann Nivens (Betty White). The final confrontation between the two women on the “Happy Homemaker” set (pictured above), which never degenerates into a catfight, is a marvel of smart writing and restrained comic acting by Leachman, White and Mary Tyler Moore herself. But the standout sequence is a rather long one at mid-episode when Phyllis commiserates in Mary’s apartment with Mary and Rhoda. Leachman in this scene runs the gamut from frantic to clueless to seething to desperate – and at all times she is brilliantly funny, especially when she samples the terrible apple pie she has baked in an effort to compete with Sue Ann, a master baker. The look on Leachman’s face (right) when Phyllis samples the pie is priceless. (Small wonder 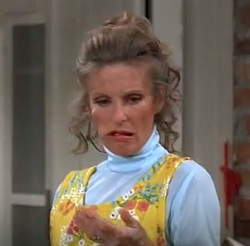 she won an Emmy for the episode.) Harper has one of her best lines ever in this scene, sampling Phyllis’ creation even though she knows it is going to be terrible and declaring with perfect comic timing, “I love this pie!”

It was clear when this episode first aired that casting the wholesome Betty White against type as man-chaser Sue Ann Nivens was a stroke of genius and that White was having the time of her life with the role – and that the producers of the show would be utter fools not to bring her back as often as possible, which they did, eventually making her a series regular.

“The Dinner Party” also premiered during the “MTM” show’s fourth season, and like “The Lars Affair” it has a set piece that holds up to this day as one of the best in the history of situation comedy. Mary throws a small dinner party for a visiting congresswoman and recruits Sue Ann to prepare the meal. The main course is Veal Prince Orloff, half of which Lou Grant (Ed Asner) helps himself to when Mary brings it to the table (see image at top). Who can ever forget Mary taking Lou aside and telling him with controlled exasperation, “Mr. Grant, you took half. You have to put some back!” Henry Winkler makes what I believe to have been his first television appearance as a laid-off co-worker Rhoda brings to the dinner who has to sit alone at the little table in front of Mary’s balcony.

Incidentally, the fourth season of “The Mary Tyler Moore Show” was Valerie Harper’s last as Mary’s best friend Rhoda, Betty White’s first as Happy Homemaker Sue Ann, and the only one to not feature a guest appearance by wonderful Lisa Gerritsen as Phyllis’ daughter Bess during Cloris Leachman’s five-year run on the show. (Where has Gerritsen gone? This guy tried to find out.) It was also the season during which Lou Grant and his wife Edie separated, making “MTM” the first sitcom to seriously explore estrangement and the eventual end of a marriage. That was particularly interesting given the fact that Mary Richards was supposed to be divorced at the time the series began and network executives wouldn’t allow it. Also, after two years of wedded bliss on spin-off “Rhoda,” the title character endured a season-long separation from husband Joe in season three that ended in divorce.