The N-Word on TV, From the Bunkers to “black-ish” 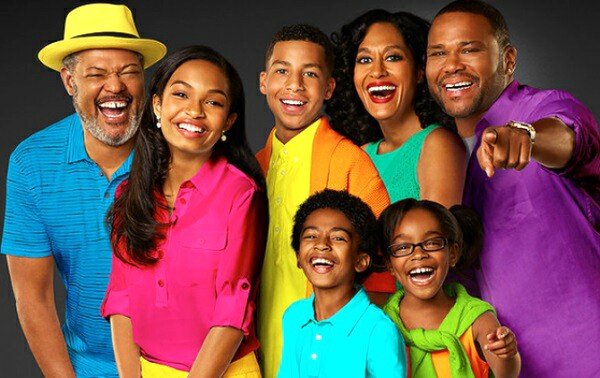 We’re three weeks into the 2015-16 television season and so far the only single episode of any series that seems to have generated any talk at all is the sophomore season premiere of ABC’s superb family comedy “black-ish,” which examined the many and varied reactions from people -- especially African Americans -- to mention of the N-word. (The cast of "black-ish" is pictured above.)

The episode began with little Jack Johnson, youngest son of the family around which the series revolves, performing the Kanye West song “Gold Digger” at the private school he attends.

His rendition started off sweetly enough:

But then came the hook, and that’s where the trouble began:

Jack’s innocent performance had wide-ranging ramifications, including his eventual suspension from school, which enforced its zero tolerance policy towards hate speech -- a policy his mother Rainbow (or Bow, as she is known) had actively supported. Jack doesn’t understand the fuss: He learned the lyrics to this popular song during his morning rides to school, singing along with his dad, Andre (or Dre, as he is known).

The incident got the entire Johnson family talking – exactly the way that everyday occurrences set off lively conversations/debates/arguments in the Bunker household 40-plus years ago on the classic Norman Lear comedy “All in the Family” (an important series that, almost everyone including Lear agrees, could never be made today, at least not in the way it was).

Dre (Anthony Anderson) noted that his generation “reclaimed” the N-word after centuries in which it was only spoken as a term of hatred or degradation. He called it his “precious word” and insisted that some people should be able to say it some of the time.

Bow (Tracee Ellis Ross) asserted that she generally takes a zero tolerance approach to the word, given its history -- but not this time, because her son didn’t use it in a hateful way.

Dre agreed, arguing that “Quentin Tarantino writes it more times in [the movie] `Django [Unchained]’ than I can count and he gets an Oscar for it.” Why then is Jack held accountable, he wondered. “He doesn’t have an ounce of hate in his heart.”

Dre’s parents, Earl and Ruby, said that they don’t like the word at all. “Of course, every now and then it slips out,” Earl admitted. 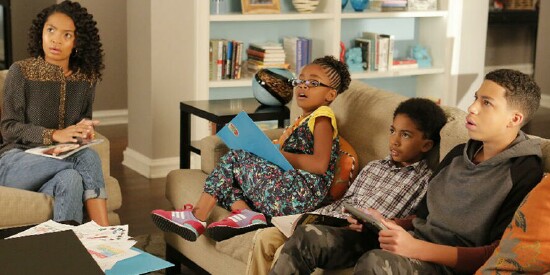 The Johnsons’ oldest daughter, 15-year-old Zoey, couldn’t fathom why everyone was so worked up about the situation. Dre lost his cool when she casually explained that all of her friends use the N-word all the time, including her white friends. Jack should be able to say it all he wants, the exasperated Dre declared. But Zoey’s white friends? Never!

Dre later told Jack he is free to use the word, but he should hold off until he learns the history of it.

All of the conversations among the various Johnsons were smart, funny and insightful and made clear how different generations of African Americans regard the word today, particularly kids, teens and Millennials, many of whom simply don’t understand the history of it and treat it as just another thing to say. For them, it has been stripped of its hateful power. For their grandparents that simply isn’t the case. For their parents – the generation in-between – it’s a tough issue to manage, like so many others these days.

The details were different, but these were exactly the kind of exchanges the Bunkers and their neighbors the Jeffersons engaged in decades ago.

ABC chose to beep the word whenever it was mentioned in the episode. There has been some discussion as to whether the network should have done that or not.

When I watched it recently, I immediately flashed back to the first time I could recall actually hearing the N-word on television, in an instance when it was expressed with true contempt. It happened in an episode of “All in the Family” titled “Lionel’s Engagement” that first aired on February 9, 1974 when one character spat the word at another. It was not the character you might think – and CBS did not beep the word! (When retro channel Antenna TV repeats the episode it doesn’t beep the word, either.)

In that episode -- which laid the foundation for the eventual “All in the Family” spin-off “The Jeffersons” -- Lionel Jefferson announces that he is engaged to a girl named Jenny Willis. Accordingly, Lionel’s parents, George and Louise, throw a party to celebrate.

When Louise tells George that she has invited Edith and Archie Bunker to the soiree, George – known at the time “All in the Family” first ran as the “black bigot” on the show – comes unglued. “That honky ain’t comin’ to no party I’m throwin,’” he growls. Louise makes it clear to George that the Bunkers will be welcome at the party. (When push came to shove, Louise often had the same control over George that Edith had over Archie.)

Archie and Edith arrive at the party, only to discover that they are the only white people in the room. Told to be nice by Edith, Archie approaches George, offering a sorry excuse for a compliment. “That formal invitation you sent by your wife; I think that was very white of you,” he says.

“That’s exactly the way I felt when I did it,” George replies.

Their strained acceptance of each other doesn’t last long. A small dust-up ensues when Archie refers to George’s mother as his “Mammy.”

“You see?” George rants to Louise. “That’s what you get for inviting whitey!” 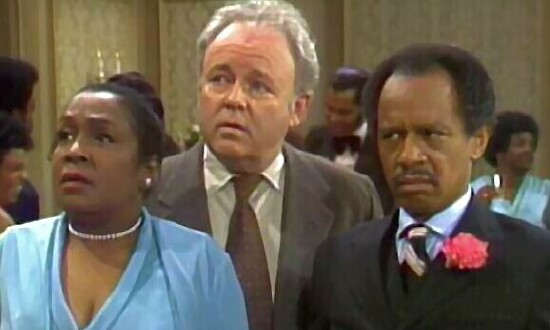 But George really loses it when Jenny’s parents Helen and Tom arrive and George sees that Tom is white. After a few minutes Helen and Tom get into a loud argument – and that’s when the N-bomb is dropped.

“Listen to her, Louise,” George says of Helen, who is especially vocal. “That’s what happens when you mix black and white.

In one of the most memorable lines in the history of the show, Archie, who seems as genuinely surprised as viewers were at home to hear George use the word, turns to Edith. “Listen to that!” he says. “I ain’t used that woid in three years!”

(George’s dislike of the Willises didn’t end in this episode. In “The Jeffersons Move Up,” the episode of “All in the Family” that first aired on January 11, 1975 and was the official pilot for the spin-off, George would refer to Tom and Helen as “Mr. Day and Mrs. Night.”)

I don’t recall if Archie used the N-word during the first season of “All in the Family,” but it wouldn’t surprise me to learn that he did. His response to hearing it in this episode was one of many moments throughout the life of the series that illustrated the gradual softening of his prejudices. They were never fully eradicated, but during the life of the series Archie definitely (if grudgingly) responded in a positive way to the influences of his liberal daughter and son-in-law and his friendship with Louise and Lionel Jefferson.

The most significant takeaway from “All in the Family” was that throughout its run Archie and his family were processing and adjusting to the changing world around them ... just as the Johnsons are responding to life today in “black-ish.” It may never be held in the same timeless regard, but like “All in the Family” “black-ish” is a contemporary comedy with many things to say that continues to find entertaining ways to say them. (The same is true of CBS’ “Mom” and ABC’s “The Middle,” which dare to take on the economic realities faced by most Americans today.)

Sitcoms like these don’t come along every season. They’re entertaining, they’re important as social commentary and they deserve to be acknowledged and remembered as valuable cultural artifacts.