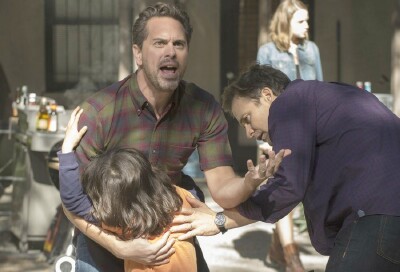 The lively conversations that are likely to swirl around NBC’s melodramatic mini-series “The Slap,” which debuts tonight, may eventually prove to be more than the program merits. But right now they are easy to understand. I don’t think there has been as powerful or provocative a moment of scripted television during this very young year as the one in “The Slap” with which anyone who owns a television, computer or mobile device must by now be familiar – a freaked out father, played by Zachary Quinto, rushing to the aid of his imperiled child, sustaining a shocking and painful blow to the shin and reacting in the madness of the moment by smacking a dangerously out of control brat.

“The Slap” may be overwrought at times and its characters may not be very relatable (educated, artsy, upwardly mobile city dwellers, most of whom seem to come from a relatively tiny subset of humanity that is not at all cared about outside of New York). But there is no getting around the fact that watching a grown man smack a young boy, for whatever reason, can get anyone worked up in a matter of seconds. As the ramifications that must assuredly follow that action continue to unfold I am certain the opinions (and tempers) of viewers and critics alike will flare with some regularity.

I have only watched the first episode of “The Slap,” in part because I wanted to write about it from the perspective most people will have by 9 p.m. ET tonight or in the days to come. That is, they will only have the first hour to think about and react to, and it will be their response to that hour that determines whether or not they continue with the program. Frankly, I can’t recommend that anyone commit to this show because I wasn’t all that impressed with it. Take away that cataclysmic incident referred to in the title, which most of us have already seen, and there isn’t very much else going on that’s of any real interest. The only characters who are even remotely interesting – Peter Sarsgaard’s Hector, the birthday boy with the blues at whose party all hell breaks loose; Melissa George’s Rosie, the molly-coddling mother of the undisciplined little boy with the vicious mean streak, and Quinto’s Harry, the slapper – aren’t very likeable. Everyone else on the canvas is easily dismissed. Already I don’t care what happens to any of them.

I wish it were better – indeed, I hopeit improves, and quickly – for a number of reasons. At the top of that list is NBC’s admirable decision to create a topical miniseries as a stand-alone television event. After years of listening to broadcast executives tell us why minis of any kind no longer made economic sense, it seems that Netflix and other streaming services, where such things thrive, have shaken some sense into them. I’m all for a limited, one-time, eight or ten or twelve week commitment, provided my time investment yields satisfying dividends.

It is also great to see a network put together a drama that does not revolve around crime-stoppers, doctors, lawyers, supernatural beings or super-heroes. Real people are fascinating, too. Any writer worth his or her chops ought to be able to prove that over a period of time. NBC’s “Parenthood” was outstanding in that regard, as was Alan Ball’s unforgettable HBO series “Six Feet Under,” to name just two examples.

One doesn’t want to discourage future productions of this kind – but jeepers, what a disappointment tonight’s episode turns out to be, distancing the viewer from whatever emotional impact the actions of the characters is supposed to have made and doing little to generate ongoing viewer engagement. I couldn’t help but wish while watching the show that it had been set somewhere outside of New York City or any other major urban center where people are so caught up in maintaining appearances and doing what the media tells them they should do. I can imagine an incendiary incident like the big slap leading to a much more explosive, from the gut series of confrontations in a suburban backyard than we get in the pilot.

A word about the all-important slap in question and its positioning in the promos for this show. It is not as if Harry simply walks up to a kid and beats on him. As introduced in the pilot, the errant child is a rotten little monster in every sense of the word and has been allowed to run wild by parents who clearly do little to effectively discipline him, even when he is destroying other people’s property or threatening other children. (Was he born bad? We don’t know. Regardless, the poor kid doesn’t seem to stand a chance.) Harry’s actions, it can be argued, actually save other children from possible grievous injury. Also, part of Harry’s shocking response comes after being attacked by the kid in a way that had to hurt.

But, again, it’s not as easy as that. Harry doesn’t simply slap the brat – he hauls off and belts him in a way that must have left the kid seeing stars. The child isn’t injured, but a less punishing blow (somewhere other than the kid's face) might have positioned Harry as less of a monster himself, even to those who believe in minimal discipline regardless of the severity of a child’s actions. I think anyone in Harry’s position would have been excused for roughly pushing the brat away, especially after that vicious kick, though I’m sure dedicated enablers would go berserk over any response other than a “time out.”

The point is, most of the first hour of “The Slap” is kind of sleepy and uninteresting while everything about the big moment that everyone will tune in to see – that punishing blow – feels extremely overdone and hyper-dramatic. I suspect there is a truly insightful story smothered somewhere in the middle. There is no telling yet if subsequent episodes of “The Slap” will level off and offer anything of everyday value. The actual execution may be flawed, but the intent is admirable from every perspective.