The Public Is Divided About Abstract Democracy 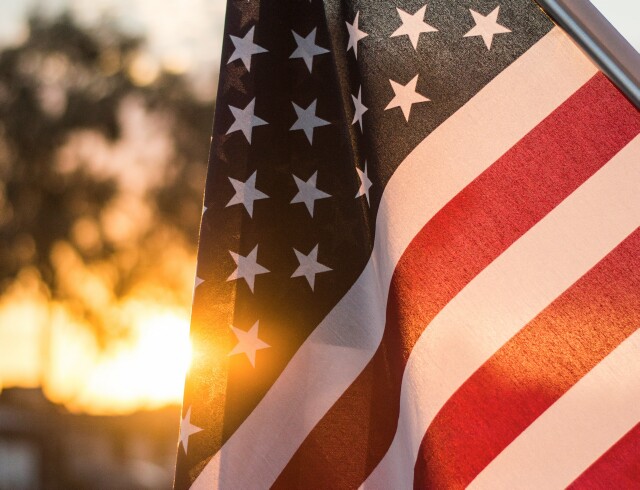 I'm proud to be a member of the Market Research Council and even prouder of their new program series, which is projecting deep intelligence into the marketplace like a firehose.

In an hour last week, the MR Council hosted two presentations about the midterm election, one on the media spend, presented by ADImpact CEO Kyle Roberts, and the other on the mood of the nation, by top pollsters Peter Hart and Jeffrey Horwitt, Founder and Partner of Hart Research respectively.

Kyle, who has made ADImpact the leading BI company in the political field, showed that both parties are each spending about $4.5 billion for the midterms, with most of it in television, specifically spot TV. 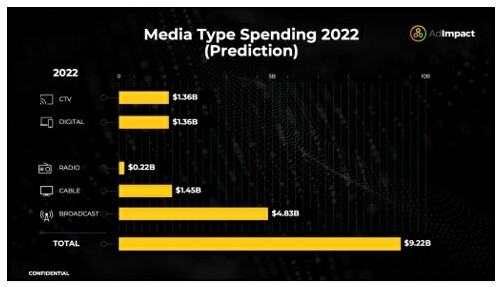 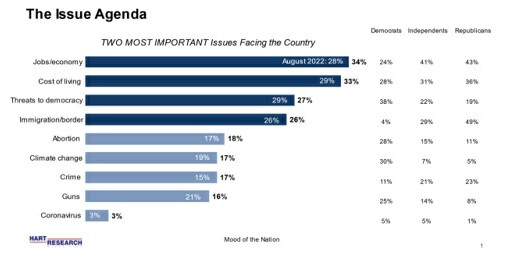 The public must be thinking pretty abstractly about democracy, I thought, seeing this slide. They're not imagining what it would be like to live in a place that could turn out to be very like Russia and China.

Why Democracy is Worth Saving

I have always thought that all Americans are inspired by the Noble Experiment, the United States of America putting into practice the ancient idea of a social compact for protection of individual rights and collaborative self-governance. The alternative methods of running a country appeared to be obviously wrong and bad going as far back in history as we can go. Too much power in the hands of too few. Largely, successful bullies. Rarely, successful uniters.

Admittedly, the ones who took over were really good at doing their homework, and for millennia the common person went along with it because the alternative of overthrowing it and then having to set up something ourselves always seemed too daunting.

Then a group of courageous geniuses decided to finally do something about it, like the French Revolution but with more intensive forethought and the integration of more philosophers' ideas. Doing deep homework the way the world's takeover artists always have excelled throughout history. This became our heritage. Checks and balances designed to keep humming a complex machine answering to so many different viewpoints. How could we not all be proud of it and want to keep it going and getting better all the time, and helping not forcing others to benefit by emulating our ways until the whole world can live as one…

I always thought that dream drove the heart of every American.

I never imagined that the essence of what made us United could be politicized and identified as partisan.

I am dumbfounded watching the party that has democracy as its name can't seem to make the issue seem as vital as it obviously is, despite the overwhelming powers of media and in the case of just this midterm election, $4.5 billion dollars' worth of air time being invested by that party.

What is a republic? By definition, the people elect representatives who run things, therefore since the ultimate source of power is the people it is a democracy, specifically a type known as a representative democracy. The USA is both those things, and both of those things spring from democracy, the notion that the people should get together and set up a system to govern themselves. So why should democracy become a supposedly divisive issue? Has the very meaning of the word been so obscured by all the noise in our minds and lives that it's just another meaningless abstraction?

Would it be an abstraction if you found that you were in trouble with the government because someone told them about something you did? How abstract would it be if you were having a loving dinner with your family and the political police kicked in the door? If you noticed that late night comedians were no longer making jokes about politicians? How would you like being conscripted and sent to fight a suicidal war against people you admire? Or have one of your kids conscripted? Would it be abstract to be told how many kids to have? How abstract would it be to not be able to say things expressing your feelings without worry about getting in trouble? What if you had to play down your spiritual beliefs? If you are in any way a minority or already underprivileged, it is going to be much worse for you.

This is what life is like in an autocracy, where too much power is in the hands of too few people. We see it every day in the news in most countries in the world. Until only a few short years ago our own ways were a beacon of hope and determination to billions of people and then we pricked it like a bubble by our behavior suddenly becoming as lewd and indefensible as everywhere else. It's not too late to restore ourselves and be stronger for our fall.

Content creators and sponsors everywhere ought to be creating content continuously to remind us of how good democracy is and how bad is the sole alternative, autocracy. You are spending $9 billion between the two parties for the midterms, almost all in television, an image medium, make with the images. All those billions will be wasted depending on abstract buzzwords to do anything except further unconstructively inflame the polarized cores and leave the middle in confusion. Both parties believe in democracy -- and if that is not true, the Noble Experiment is over -- and if that importance of democracy doesn't get proven by the ads we see, the ads are just more poison driving us apart into two abstract dreamworlds.