The ROI of a Social MVP 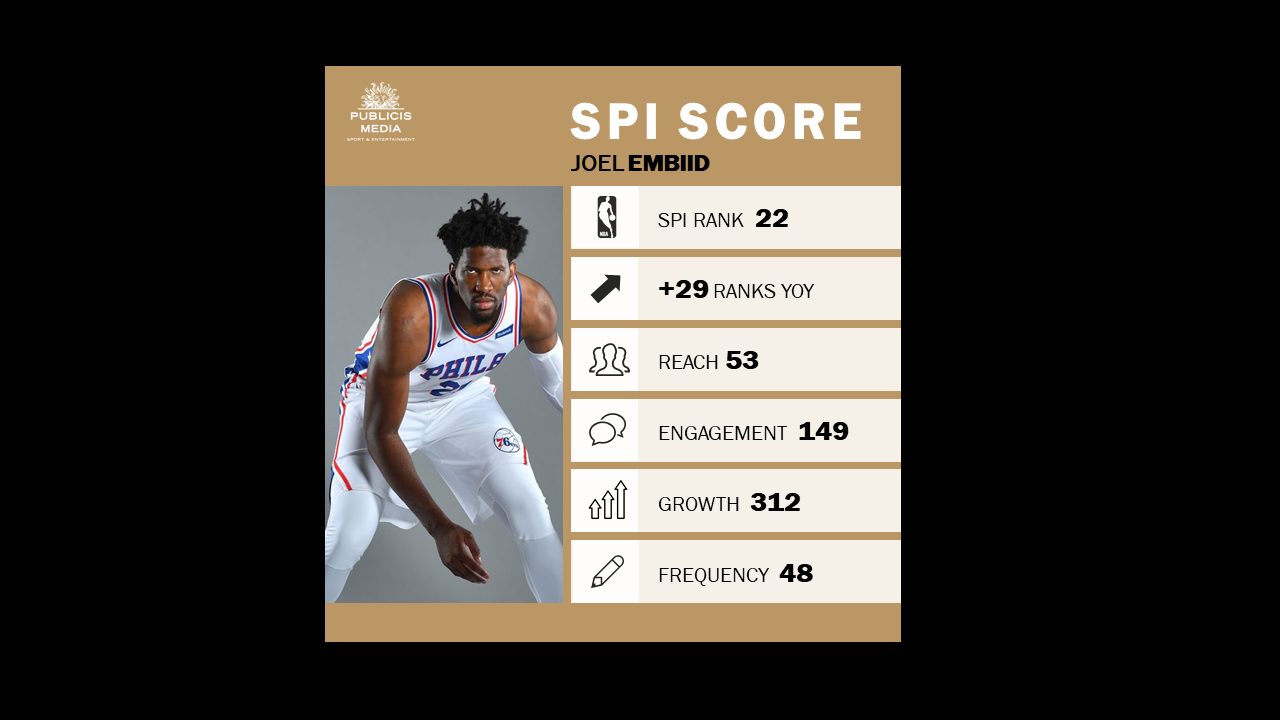 There has been a lot of talk recently about the NBA replacing the NFL as America's favorite sports league.  Even legendary NBA players like Kareem Abdul-Jabbar have been vocal about this potential shift -- and with good reason.  The NBA is fast-paced, fun and refreshingly unfiltered.  And now the league's top players, such as the Cleveland Cavaliers' LeBron James, the Golden State Warriors' Stephen Curry and the Houston Rockets' James Harden, as well as a crop of fresh faces including the Philadelphia 76ers' Joel Embiid, are driving a new dialogue with fans on social media that is transforming the game both on and off the court.

In a recent NBA Basketball Social Performance Index (SPI) study conducted by Publicis Media Sport and Entertainment (PMSE) with Blinkfire Analytics, we uncovered some key trends driving this new culture of the NBA.  We also unlocked some ways marketers can capitalize on opportunities to join in this dynamic conversation.

Fans Live for the Drama

The rise of social and its usage by some of the NBA's greatest players gives fans a front row seat to drama as it unfolds on and off the court.  Media rights for the NBA are much more flexible than the NFL, allowing content to more easily go viral.  Players usage of emojis and witty posts fuel speculation about everything from trade deals to rivalries and even dating rumors.  More importantly, you also have NBA royalty like James and Curry weighing in on everything from societal issues to pregame commentary to family life.  A new shorthand language has emerged on this channel, and you do not have to be an avid NBA fan to follow the conversation.

Right now, the topic du jour is the upcoming NBA All-Star game, which is an event where popularity reigns supreme and determines which players are selected.  In the early rounds of voting, the Milwaukee Bucks' Giannis Antetokounmpo, New York Knicks' Kristaps Porzingis and 76ers' Embiid -- who are all in their early 20s -- were surprising lead contenders, ranking ahead of some of the more established players of the game.

Embiid and Antetokounmpo were ultimately named All-Star starters, showing how younger and more socially-engaging players are making names for themselves and amassing loyal fan bases.  Coincidentally, both players, as well as Porzingis, scored high in early All-Star voting and experienced an increase in their SPI score this year, with Antetokounmpo scoring (+47), followed by Embiid (+29) and Porzingis (+11).

Embiid is a prime example of someone who has helped transform the culture of the NBA through social media.  He is witty, authentic and shares content that spans beyond his repertoire to include other global sports and athletes.  Despite having less followers than Golden State Warriors' Klay Thompson, Embiid is more skilled at engaging his fan base.  Over the past year, he has generated 11,000 more likes and 3,800 more comments than Thompson.

Interestingly, Embiid's popularity extends far beyond 76ers devotees, as roughly 98% of his followers do not identify as 76ers fans or even following the team on social media sites.  In the most recent off-season, Embiid jumped a stunning 29-points in social rankings, compared to his 2016 metrics, providing another indication of his growing global presence.

Some players, like the Cavaliers' Jae Crowder, have moved up the ranks of our SPI thanks to their strong engagement rate, their sense of humor and their ability to blend their personal and professional lives.  In Crowder's case, his score grew by more than +122% over the year, partly due to his move from the Boston Celtics to Cleveland and thanks to off-season social chatter, which kept him in the spotlight.

Of course, simply being an NBA young up-and-comer or a star doesn't guarantee that a player will achieve the highest engagement on social.  Good content still drives followers, likes and fans.  Golden State's Kevin Durant (the No. 2 most followed NBA player) and Houston's Harden (the No. 5 most followed player) are two examples of solid players on social platforms who do not offer a true look behind the scenes and, as a result, since 2016 their SPI scores have dropped.  In contrast, Curry and James chime in on current events and show inside looks at their family and personal lives, driving greater authenticity and consistently earning them top spots on our SPI listing.

According to our research, the average daily engagement driven by the top 117 NBA players doubled in 2017, while frequency of posting remained the same.  Players were posting about the same amount, but fans were more engaged.  One key reason is the rise of Instagram.  According to eMarketer, nearly 594 million people worldwide used Instagram regularly in 2017, representing about a quarter of social network users.

It is clear we are living in a day and age where NBA players have become their own content creators.  A large Twitter following would have once been seen as a channel for simple awareness or association, but today, when a brand affiliates with a particular player, it can help drive greater ROI. There are still marketing opportunities to be found on social media.  For instance, there are a number of players who hold a strong SPI ranking who have not yet been engaged for marketing endorsements.  Brands that can align authentically with these untapped social media superstars may find themselves in an advantageous position among this new generation of NBA fans and followers.  After all, these social media-savvy NBA stars have already demonstrated they can keep the conversation going on social long after the last-second, half-court shot goes up or the final whistle is blown.