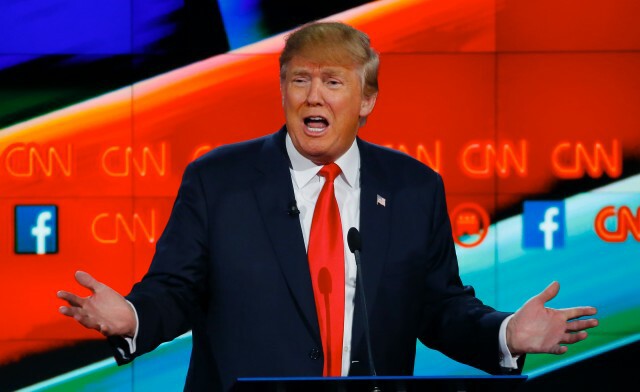 Whether you support him or not, you have to admit that no individual in 2015 galvanized the nation like presidential hopeful/GOP front-runner Donald Trump. Tellingly, he accomplished that feat primarily through television, though his presence was felt and hotly debated throughout all media. In terms of overall impact, nothing on television during the last year came close to Trump’s many appearances on cable news networks, broadcast news programs, talk shows and entertainment series.

(Note: You'll find my complete list of the Top 25 Shows of 2015 at the end of this column, plus ten bonus shows worth noting.)

When Trump appeared on ABC’s “Jimmy Kimmel Live” earlier this month, the host said it best: “There came a point in our first guest’s life when he had to make a decision as to whether to buy the United States or just become our president.”

Since his first official television appearance as a candidate, when he announced that he was running and slammed illegal immigrants from Mexico in the process, Trump has consistently managed to offend almost everyone at one point or another. From Mexicans to Muslims, from Rachel Maddow to Megyn Kelly, from John McCain to Hillary Clinton to Jeb Bush, he has pummeled anyone and everyone with whom he has ever disagreed about anything. And as each new offense has been deconstructed ad nauseum by every news person and TV talk show host in the country, his approval ratings have climbed higher.

“I don’t care if people like it or not; I do the right thing, I say the right thing,” Trump modestly asserted during his conversation with Kimmel. “I think maybe that’s why we resonate.” After the perpetual hardships and exasperations Washington has subjected us to during the last two presidencies, is it at all surprising that tens of millions of Americans agree with so much of what he says (not to mention the way in which he says it)?

Regardless, when strung together Trump's many television appearances – including his uneven second shot as host of “Saturday Night Live” – add up to the TV spectacle of the year. (And it isn’t over yet. He’s going to appear on Fox News Channel’s live coverage of the New Year’s Eve festivities in Times Square.)

Trump has singlehandedly ignited interest in the Republican debates, long considered some of the dullest and dustiest programming on television. “The Republican debates have become like the Super Bowl,” he told Kimmel. “In the last cycle if you had one, two million people [watching] they would have considered it a big event. Frankly nobody wanted them; the networks didn’t want the debates.

"And then something happened this cycle and I won’t tell you what it is," he said with a smile.

Is it possible that Americans will elect as their leader the former host and executive producer of a silly reality series (NBC’s “The Celebrity Apprentice”)? Why not? Thirty-five years ago they elected the star of the silly 1951 movie “Bedtime for Bonzo” as the 40th President of the United States. Thirty-five years later Ronald Reagan is widely regarded as one of the best presidents in modern American history.

Certainly, the passing of time has been generous to memories of the Reagan Era, but still … this would appear to be the time of Donald Trump, at least as the most fascinating television personality of the year.

“The Donald Trump Show” completes my list of the Top 25 Shows of 2015. Below is a review of the other 24, followed by ten shows that would have been included had I compiled a Top 35 list.

The ten shows I would have liked to find space for, in no particular order, are: