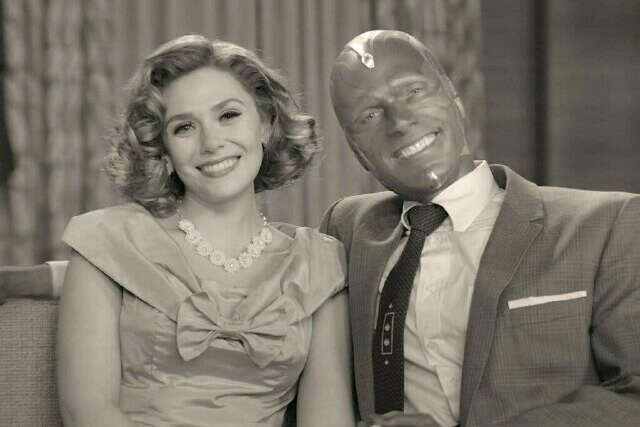 WandaVision (Disney+) -- The MCU had a banner year on Disney+ with The Falcon and the Winter Soldier, Hawkeye, Loki, the animated What If? and WandaVision, which became a genuine pop-culture phenomenon that engrossed even those who have never seen a Marvel movie. (Elizabeth Olsen and Paul Bettany are pictured at top.) Part a continuation of stories from the MCU, part nostalgic love note to timeless TV classics from the distant past, part thrilling action-adventure and at all times an engaging mystery, WandaVision generated huge interest in established and forgotten Marvel characters alike, especially sorceress Agatha Harkness. And speaking of Agatha, who was spinning the plot all along, what a year it has been for Kathryn Hahn. It began with her playing an ancient, all-powerful witch who came and went years ago in the pages of the Fantastic Four and ended with her profoundly convincing portrayal of teenager Jo on ABC's live presentation of the beloved '80s hit The Facts of Life. Can't wait for the recently announced WandaVision spin-off, Agatha: House of Harkness.

Mare of Easttown (HBO) -- If ever there was a time when people wanted lighthearted entertainment it was during 2021, as the bad news about the pandemic and other problems kept on coming. And yet, HBO's unrelentingly grim and relentlessly depressing limited series about a female detective somehow moving forward through one town crisis or personal tragedy after another was a must-see event. Then again, with yet another magnificent performance by Kate Winslet at its center, how could it lose? Julianne Nicholson, Evan Peters and Jean Smart were pretty spectacular, too.

The Underground Railroad (Prime Video) -- Director and executive producer Barry Jenkins' searing ten-part adaptation of Colson Whitehead's Pulitzer Prize-winning 2016 novel about a woman's valiant efforts to escape slavery deserved more attention than it got. (Maybe dropping all ten episodes of a dense historical drama at the start of the summer wasn't the right way to go, no matter the artistry.) Regardless, I think Railroad will be one of those long-tail programs that continuously builds its audience as the years go by, in part because I think smart history teachers will assign it to their students as homework. As Ainsley Andrade often points out in his columns for MediaVillage, certain essential subject matter isn't taught from all perspectives (if at all) in our school system. Thuso Mbdeu is unforgettable in the central role of Cora, an escaped slave who goes to hell and back in her quest for freedom.

Pose (FX) -- The abbreviated final season of this emotionally charged gem about the challenges faced by New York City's LGBTQ+ community in the '80s brought out the best in its cast -- especially Billy Porter, MJ Rodriguez, Angel Bismarck Curiel and Dyllon Burnside. It also reminded us, as the COVID-19 pandemic continues, that another virus remains with us after more than 40 years, having taken approximately 35 million lives and currently infecting more than 38 million people worldwide.

It's a Sin (HBO) -- Russell T. Davies was already one of the finest writers ever to work in television before he created this amazing drama about vibrant young gay men who are only beginning to explore their sexuality in early-Eighties London when they are struck down by HIV and AIDS -- even before they know or fully understand what they are up against. Credit Davies and his cast -- especially lead Olly Alexander -- for a production that somehow managed to be uplifting and devastating all at once.

This Is Us (NBC) -- Many shows returned from pandemic postponements with a determination to reflect the harsh realities of this nasty new decade, including black-ish, Grey's Anatomy and various medical and procedural dramas. But This Is Us went dangerously deep, as we witnessed the escalating racial tensions of 2020 tear our beloved Pearson family apart with such ferocity that we feared they could never put the pieces back together. The blistering conflict between Randall (Sterling K. Brown) and Kevin (Justin Hartley) was particularly upsetting to see. As a viewer, I felt like I was right there with them during their confrontation, wanting nothing more than to be anywhere else ... kind of like when Tony and Carmela Soprano had their epic blowout in the season four finale of The Sopranos. Yes, it was that well done.

Midnight Mass (Netflix) -- Eerie and unforgettable, this well-produced limited series told the story of a relatively isolated and deeply religious island community imperiled by the arrival of a mysterious priest (Hamish Linklater), a troubled young man (Zach Gilford) and a bloodthirsty angel. Midnight Mass is largely a scary supernatural thriller with more than a few genuine frights and surprising jolts, but the ending, in which a mortally wounded character named Erin (Kate Siegel) gives voice to a soulful internal monologue about the meaning of life and the possibilities brought on by death, was uplifting and enlightening despite the horror all around her. What a beautiful piece of writing.

911 and 911: Lone Star (Fox) -- Fox's twin action shows continued to dazzle with episode after episode featuring epic disasters once seen only in big-budget disaster movies. (Seriously, how do they do it so often and do it so well?) And there is more to love here: At a time when diversity and inclusion among television casts and characters doesn't always result in meaningful representation, 911 and its spin-off never hit a false note. For example, there is no sweeter love story on television right now than the swoony romance of Ronen Rubenstein's T.K. Strand and Rafael Silva's Carlos Reyes. (The pair is known online as "Tarlos.") And there is no better night of broadcast television than Fox's Monday when these two shows are playing back to back.

The Dodo and Cristina Zenato (Instagram) -- I have included the Instagram feed for The Dodo on my Top Programs of the Year list for quite a while now, simply because it continues to give me life on even the worst of days, reminding me (with video evidence) that there are many good, selfless people in the world who will stop whatever they are doing to help a fellow creature in need, be it a dog, a cat, a squirrel, a snake or a bee. This year I'm adding the Insta feed of @CristinaZenato, who removes hooks from the mouths of sharks (that later visit her and bring along other sharks in need of help). Check these out and learn new things about the world around you.

Invincible (Prime Video) -- I'm not sure if this is the most violent animated program I have ever seen, but it is certainly the most surprising. And perhaps the most engaging, at least in terms of long-form storytelling. It's based on a long-running comic book about a teenager learning to cope with his emerging superpowers while beginning to question what he knows about his dad -- who happens to be the most powerful superhero on Earth. I think Omni-Man, as his father is known, could take out half of the MCU. The vocal performaners include Sandra Oh, Steven Yeun and J.K. Simmons.

Days of Our Lives (NBC, Peacock) -- After years of denigration by the broadcast networks, it's amazing that we still have four daily soap operas. (It's even more amazing that they remain the only program genre that broadcasters do better than anyone else.) So, three cheers for NBCUniversal and its unwavering support of Days of Our Lives -- first with a side story on the DOOL app, then with a limited series and a standalone movie on Peacock. And how about head writer Ron Carlivati continuing a storyline from more than 25 years ago, when Satan first came to Salem and possessed compassionate Dr. Marlena Evans (the invaluable Deidre Hall). Ol' Beelzebub is back in residence, waiting for Ciara and reformed serial killer Ben to have their baby. Good times!

America's Got Talent (NBC) -- This outsized competition show has always been a favorite of mine, but there was something extraordinary about its 16th season. Collectively, the talent was even more impressive than usual, especially magician Dustin Travella (the winner); aerialist Aidan Bryant (a marvel), and singers Storm Large, Jimmie Herrod and Jane Marczewski, also known as Nightbirde, who has been battling multiple bouts of breast cancer since 2017. Nightbirde ultimately left the competition to focus on her health, but she wasn't forgotten. Her moving performance, her strength and her courage were an inspiration to anyone who has been touched by cancer and the terrible challenges it brings.

The Retro Commercials Spaced Throughout "Live in Front of a Studio Audience" (ABC) -- With only a couple weeks left of 2021 ABC did one of those things broadcast networks should do more often, but somehow don't -- it presented a fun special (live, at that) that tapped into the nostalgia most of us increasingly crave with another of those Live in Front of a Studio Audience double-bills executive produced by Jimmy Kimmel and Norman Lear. So, we all tuned in for an episode of The Facts of Life with middle-aged people playing adolescents and somehow nailing it (especially Kathryn Hahn as Jo), followed by a less successful Different Strokes. But there was an unexpected bonus: Commercials for sponsors and other ABC shows scattered throughout that were made to look like spots from the late '70s/early '80s (when broadcast television ruled the media world). This was 90 minutes of television made with the television audience in mind. That's not as common as you might think.