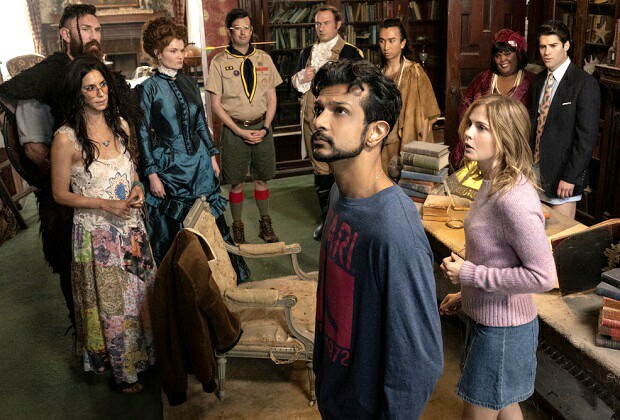 Ghosts (CBS) -- I don't think I have chosen a broadcast network sitcom as my No. 1 Program of the Year since the glory days of Friends and Frasier. So why is CBS' scary smart supernatural treat here? Because in addition to ticking all my boxes (clever dialogue, marvelous multi-tiered storytelling, great eccentric characters, a genuinely original concept, top-notch production values, fine acting by a terrific new ensemble), Ghosts (pictured above) also assumes a basic level of intelligence on the part of its audience. Oh, and it proves that broadcast programs can still be as distinctive and satisfying and interesting as shows on premium cable and streaming services.

Dancing with the Stars (ABC) -- Why is a 16-year-old broadcast competition series sitting in the second spot on my list? Because DWTS roared excitingly back to life this fall even with a cast largely devoid of true "stars." The production values for every single dance were dazzling, and every episode felt like a grand achievement in live television. Most episodes were built around a theme; as such, Grease night and those hours devoted to Disney heroes and villains were as entertaining as anything I watched all year. And I'll never forget at the end of the season watching Amanda Kloots and Alan Bersten dancing to "Live Your Life," a song written by Kloots' late husband Nick Cordero, which reduced everyone in the ballroom (and more than a few of us watching at home) to tears. Nor the joy to be had watching the show's first-ever same sex dancing couple, Jojo Siwa and Jenna Johnson, enjoy one triumph after another. Bravo to all!

Real Time with Bill Maher (HBO) -- Even without the many ugly urgencies of 2020 fueling his humor and his conversations with guests, Bill Maher continued to offer the only televised commentaries and insights worth watching about our increasingly twisted times. He can deconstruct conservative crap and liberal lunacy with equal aplomb, a singular and stunning achievement that keeps him above the quagmire of cable "news" and a few hyper-opinionated broadcast personalities, too. And he's not afraid to defy the cancel culture and tell the woke mob to "Shut the fu*k up." My hero!

Reservation Dogs (FX on Hulu) -- Leave it to FX (on Hulu or anywhere else) to deliver the most important new series of 2021: A comedy by indigenous creators about indigenous teens striving (like most kids in their age range) to extract themselves from the confines of the lives they were born into and get someplace better (in this case, Los Angeles). There is nothing I can say here about Dogs that my colleague Juan Ayala hasn't expressed in his review of the show or in his Multicultural TV Talk podcasts with series stars D'Pharoah Woon-a-tai (in a roundtable conversation that celebrated Native American History Month) and Devery Jacobs. Follow those links and be enlightened.

Succession (HBO) -- The two-year stretch between its powerful pre-pandemic season two cliffhanger and its triumphant return this fall was certainly worth the wait, as the power-mad Roys resumed their family fight club without missing a beat down. Not since the days of Dallas and Dynasty has it been so much fun to watch members of an obscenely wealthy family suffer their own slings and arrows, eagerly cutting each other apart at every turn. But the Ewings and the Carringtons were all about oil … the rabid Roys are media moguls, and that's even more entertaining.

Acapulco (Apple TV+) -- Chances are you haven't watched this show yet, so let me introduce you to another charming and disarming series brought to us by Apple TV+, the home of Ted Lasso and Schmigadoon! (I sense a pattern here.) By way of flashbacks to the '80s, Acapulco tells the story of a hard-working Mexican teenager's slow climb from a working-class background to a position (in adulthood) of tremendous wealth, beginning with an entry-level position at a fabulous ocean-front resort called Las Colinas. Come for the natural beauty and the man-made luxuries, stay for the sweet humor and heart-tugging romantic drama. Also worth noting: Acapulco is, I believe, the first truly bilingual television series. A genuine gem.

Schmigadoon! (Apple TV +) -- It's hard to select one new show this year that was arguably more original than the rest (WandaVision? Ghosts? Squid Game? Yellowjackets?) but I'll go with Schmigadoon!, a six-part musical on Apple TV+ that came along after more than one year without Broadway musicals -- or any musicals, for that matter. Every member of the eclectic, multi-talented cast -- toplined by the perfectly paired Keegan-Michael Key and Cecily Strong -- was so delightful that it's not right to say any one of them stole the show (not even Kristin Chenoweth). But I have to admit that Ariana DeBose leading a schoolhouse full of children in a spirited song and tap dance was the standout sequence for me.

Squid Game (Netlfix) -- Just as the South Korean thriller Parasite took the U.S. movie industry by surprise in 2019 (winning the Academy Award for Best Picture, among other accolades), the South Korean television series Squid Game this year came out of nowhere (via Netflix) to become what has arguably been the most talked about TV program of 2021. Small wonder: I have never seen anything quite like it, and just like you I couldn't stop watching. Its success inspired the hot Halloween costume of the year, transformed those unremarkable Vans into the latest sick kicks and much more. And here comes award season.

Evil (Paramount+) -- This scary, sexy, funny and fascinating drama is a true horror show (in the best sense of the term). Series creators Robert and Michelle King continue to earn a place in TV history, first by forcing broadcast drama to grow up with The Good Wife, then by moving characters from that show into the streaming world via The Good Fight, and now by moving Evil from CBS (where it was equally creepy and challenging) to Paramount+. Everyone in the cast is first-rate, but Christine Lahti and Andrea Martin deserve special mention as scary good scene stealers.

The White Lotus (HBO) -- After more than a year in lockdown we all needed a soothing warm-weather vacation -- or at least a tropical diversion – and HBO more than delivered with Mike White's lush limited series (filmed at the Four Seasons Resort Maui) about rich people trying to forget their problems by enjoying some fun in the sun, with tumultuous results. When it wasn't sunny and sexy it was dark and twisty -- and always more engaging than Hulu's somewhat similar stab at escapism, Nine Perfect Strangers or Fox's Fantasy Island.

Hacks (HBO Max) -- Jean Smart gave what I believe to have been the performance of the year as Deborah Vance, a tough, tireless, brittle and ballsy legendary Las Vegas comedienne who worked her way to the top no matter the cost and seeks to remain there with the help of an entitled, self-involved, recently humbled young comedy writer named Ava (nifty newcomer Hannah Einbinder). Filled with support, conflict, suspicion and admiration, their relationship is a fascinating mess that somehow bridges the widest generation gap we've seen in years.

The Good Fight (Paramount+) -- It was hardly the first time that this show reflected what was happening in our country (remember, the opening scene of the very first episode, back in February 2017, had lead character Diane Lockhart exclaiming "Oh sh*t!" upon learning that Donald Trump had been elected president), but its reflection this season of the January 6 madness was priceless. So was the season-long guest appearance by Mandy Patinkin as "Judge" Hal Wackner (emphasis on the quotes) who was at the center of it all. The current racial tensions running through almost everything smacked the narrative upside the head, as well. Consider this another grand accomplishment for the Kings (see: Evil).