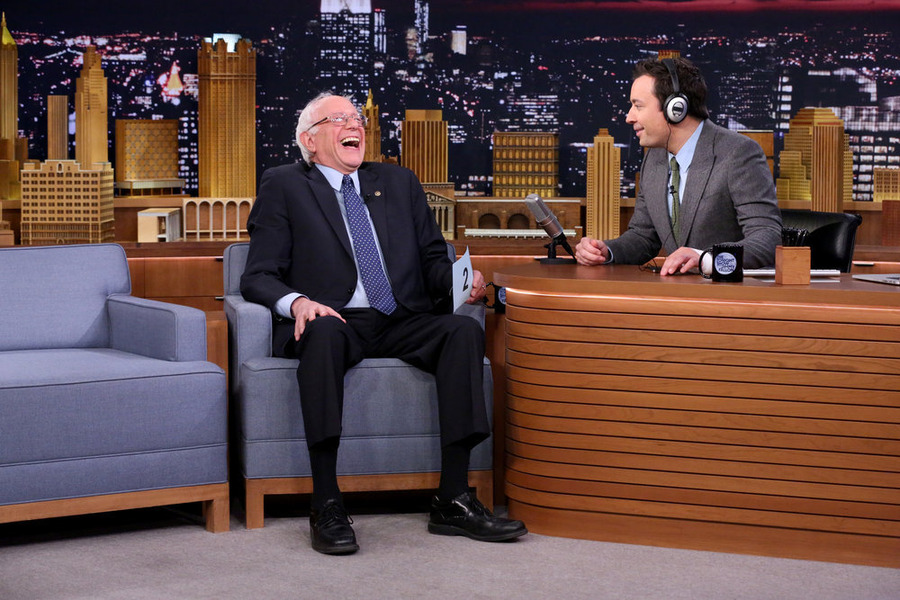 If, as so many journalists assert, late night television is some kind of war zone, then the clear victor in the daypart this year was Jimmy Fallon, who continued to keep NBC’s “Tonight Show” at the top of its game -- and the Nielsen ratings, as well.

It was certainly a year of grand turmoil in late night television: David Letterman and Jon Stewart followed Craig Ferguson out the door (Ferguson actually departed in December of last year), Stephen Colbert (who also exited a late-night franchise last December) put “The Colbert Report” behind him and took over Letterman’s spot on CBS, “Daily Show” alumnus Larry Wilmore moved into Colbert’s old slot (with “The Nightly Show”) while his former (and formerly controversial) colleague Trevor Noah became Stewart’s official replacement, and James Corden became the new host of CBS’ “Late Late Show.” In between Ferguson and Corden, CBS experimented with a number of interesting hosts for that show, both in New York and Los Angeles. (The musical chairs months of “Late Late Show” were filled with fun surprises, especially rocker John Mayer, who proved to be a very engaging talk show host. It’s a shame CBS didn’t stick with this format in some capacity.)

When everything settled down late night was populated with a variety of fresh faces -- all of them male, but what can you do? (Surely another woman has come along since Joan Rivers who is smart and funny enough to host a network late-night talk program?)

Frankly, I’m underwhelmed by the lot of them. It’s not that any of them are doing a particularly bad job, but not a one of them demands that I compromise my sleep or overload my DVR.

Rather, I can get all the late night entertainment I want from Andy Cohen on Bravo (whose “Watch What Happens Live” is still, in many ways, the freshest and most accessible post-primetime talk show), Jimmy Kimmel on ABC (now the entrenched elder in the daypart) and the unbeatable combo of Jimmy Fallon and Seth Meyers on NBC.

“The Tonight Show Starring Jimmy Fallon” was my choice at the end of 2014 for Program of the Year. I could easily bestow that honor on it this year as well, and for many years to come, but that would be too easy. As was true for me with “The Tonight Show Starring Johnny Carson” and “The Tonight Show with Jay Leno," I can’t imagine not ending my day with Fallon (pictured at top with Senator Bernie Sanders), the Roots, their great guests and the show’s reliable New York City vibe. I could do with a little less game-playing and a little more conversation, but NBC wants to keep those coveted young viewers coming, so some dumbing down is probably necessary. (A giant exception to the “dumbing” is the occasional playing by Fallon and celebrity guests of the classic game show “Password.” It’s like watching a show within a show and it’s fabulous.) 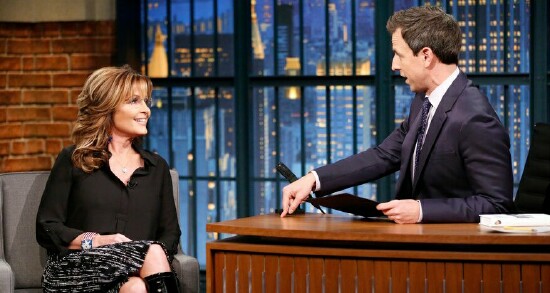 I don’t always make it to or through “Late Night with Seth Meyers,” but I’m never dissatisfied with what I see of it, especially now that Meyers (pictured above with Sarah Palin) opens the show back where he belongs – behind a desk winningly skewering the day’s news. I only wish he did new shows on Friday nights (or should I say Saturday mornings?). What’s up with that?

I’ll bet you thought I was going to forget to include Conan O’Brien and his TBS show in this discussion of late night talk shows. Well, I almost did … and that’s because, most nights, I simply forget that he’s on. Apologies to all concerned. Maybe his show would command a bit more attention if it were telecast live?