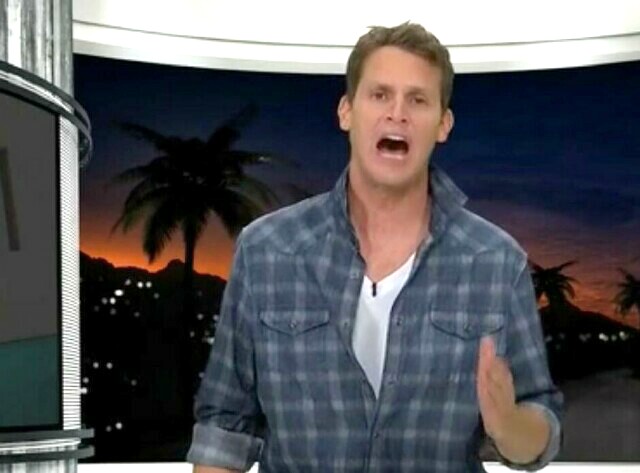 Here’s a show guaranteed to not end up on any other critic’s Best of 2015 list, but that won’t stop me from once again honoring Comedy Central’s “Tosh.0” as TV’s Funniest Show.

In recent years “Tosh” has topped my traditional Alternate Top 10 lists, where I have called it the funniest show on television. (That distinction will be even easier to make going forward now that the awesome Joel McHale and his crew have decided to bring E!’s signature comedy program “The Soup” to an end. For many years that was the show I chose as TV’s funniest, to the delight of its network, as seen in this photo of a billboard that towered over Melrose Avenue a few years ago.) 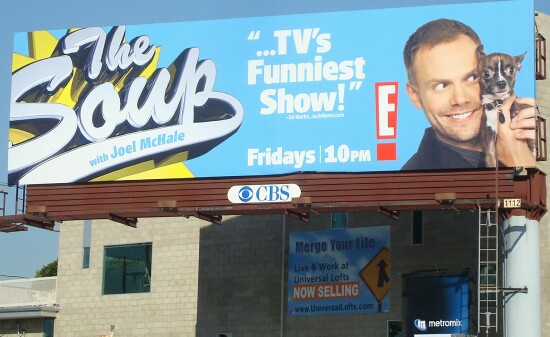 In 2015 I once again found that if I needed a visceral comedy experience – one that would make me laugh out loud, or sometimes cringe or turn away (usually while laughing anyway) – Daniel Tosh (pictured at top and below) and his team consistently came through. Happily, I could enjoy this guilty pleasure indulgence (even in repeats, where it holds up remarkably well) with family, friends of all ages and my godchildren. (Indeed, the godchildren were the first to turn me on to “Tosh” many years ago when I thought they were way too young to be watching such stuff, but they’re Millennials so what can I tell you?)

I think of Daniel Tosh the way I think of Ryan Seacrest; they make what they do on their shows look almost effortless, but then I watch others try to entertainingly host video clip shows and talent shows, respectively, with the same distinctive energies and they just don't hold up in comparison. Tosh is certainly more inventive and immersive than Seacrest, or any of the hosts of all those other clip shows, consistently achieving new levels of outrageous fearlessness as he delights in making himself (and his staff) look as foolish as the foolish video “stars” he loves to take shots at. 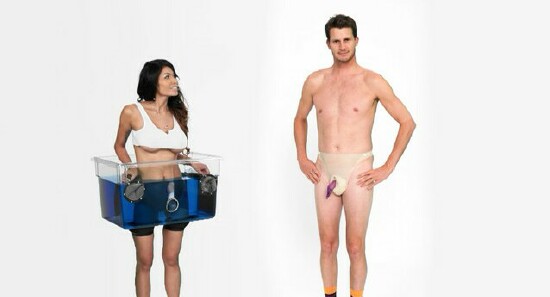 Watching “Tosh.0” can at times actually be somewhat distressing, because it generally finds its humor in showcasing absolute idiots who inexplicably do stupid, often life-threatening things and then post videos of their bad choices online for millions to see (and where they will likely live forever). What is wrong with these people? I long ago gave up trying to answer that question. Better simply to surrender to Tosh and his team and let them sort it all out -- all the while having a good laugh.