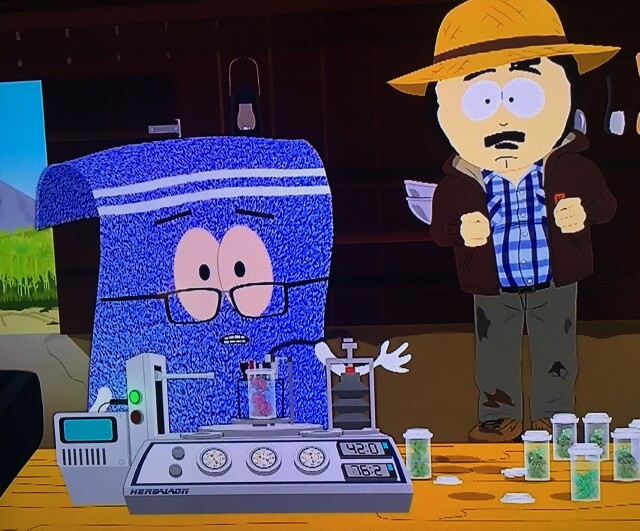 This is the second installment in a multi-part series identifying the top TV programs of 2018.  As always it is what I hope to be an interesting mix; one that challenges the sameness of so many other year-end lists of this kind.  Think of these collective columns as one list of the 25 shows I found the most engaging, or have the most to say about, or both.  The many year-end lists that will be found in print and online outlets throughout the month of December will for reasons that continue to elude me be limited to ten shows only, just like they were 50 years ago when national television consisted of three broadcast networks and PBS.  There are over 1000 shows available today on broadcast, cable and the major streaming outlets … not to mention YouTube, Instagram, Rooster Teeth, Snap and many more.  Most of them are designed to appeal to one demographic or another, and dozens of them are extraordinary for one or more reasons.  Frankly, a list expanded to 25 isn’t even enough, but I need to stop somewhere.

Does content from an Instagram feed count as television programming?  Ask any young Millennial (as opposed to an older one) or Gen Z’er and they will likely say "yes."  I’m with the kids, because in these trying times nothing provides the paws that refreshes with more impact and efficiency than quick checks of the day's Dodo postings, which almost exclusively feature humbling and heartwarming videos of compassionate people helping critters in need, from bats and bugs to mollusks and mammals, with a heavy emphasis on cats and dogs.  It’s a smart reminder to everyone that this life is not all about us.  Animal Planet wisely culled some of the best videos and put together a television series titled Dodo Heroes, so that will help support the argument that The Dodo is in fact TV.  It also has a robust web site, and Dodo content can be seen on other digital platforms, but it’s the Instagram feed that’s my go-to for instant positive feels.

Instagram runner up:  This_Girl_Is_A_Squirrel, the daily adventures of a sweet six-year-old squirrel named Jill (below) orphaned during Hurricane Isaac and taken in by a remarkable woman who has cared for her ever since.  Their bond is extraordinary.  Follow it and fall in love. 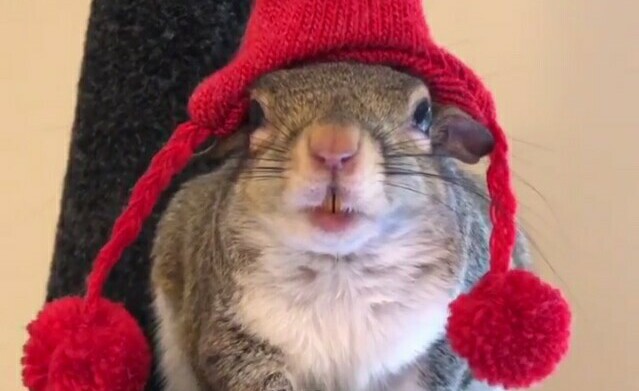 The Marvel shows on Netflix are dropping like enemies of the Hand, and not a moment too soon, because season by season the collective franchise has fallen apart.  (Let’s not even get into Iron Fist and The Defenders, both awful on arrival.)  The still shining light is Jessica Jones, which this year received shockingly little love from the industry and the press at a time when both are supposedly very sincere about supporting the #MeToo and #TimesUp movements.  Fact:  No scripted series in 2018 did more to advance the position of women in television than Jessica Jones.  The storylines spun around four extraordinary women -- semi-super-powered Jessica, her best friend Trish Walker, her sometime boss and ally Atty. Jeri Hogarth and her unstable mother Alisa Campbell, played with ferocious power by Krysten Ritter (pictured below left), Rachael Taylor, Carrie-Ann Moss and Janet McTeer (below right), respectively.  Further, the series was created for Netflix by a woman (Melissa Rosenberg) and every episode of season two was directed by a woman.  I’m celebrating all of that.  Are you? 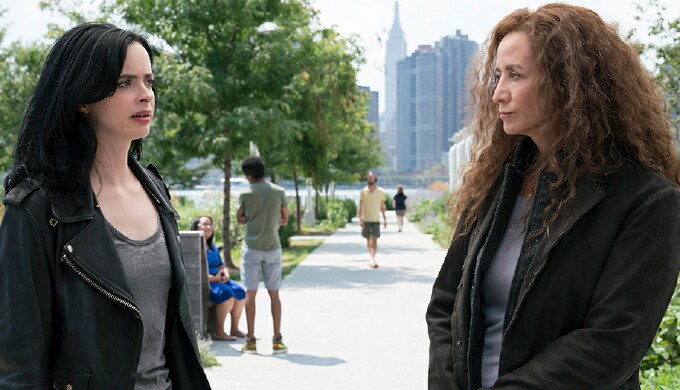 Damn, I hated to see this one end.  Arguably the best comedy about a hard-working, economically stressed American family since Roseanne (in its original run), the consistently funny series had the misfortune of premiering on ABC nine years ago, at the same time as the one-time ratings and awards powerhouse Modern Family, which stole the spotlight and every industry award available.  Nevertheless, the ongoing travails of the harried Heck family did quite well in the shadow of that behemoth, remaining relevant and entertaining from its first episode until its last.  It should have gone for a solid ten seasons, but there is no putting that horse back in the barn.  Hats off to stars Patricia Heaton, Neil Flynn, Charlie McDermott, Atticus Shaffer and especially Eden Sher, who made sweet, sincere and adorably goofy Sue Heck one of the most endearing sitcom characters in the history of television.  The cavalcade of nostalgic clips from previous Thanksgiving episodes (always a big deal on this show) that closed this final season’s Turkey Day delight was a moving reminder of how much fun The Middle has been and how much it will be missed.  ABC really should have taken a shot with the proposed spin-off, Sue in the City.  No way it turned out worse than most broadcast comedies. 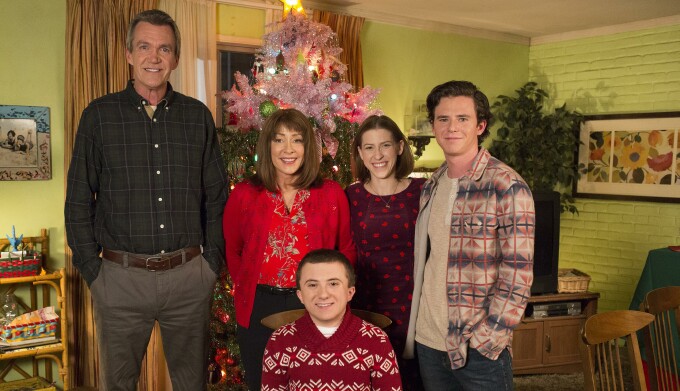 Not since The Golden Girls has “old age” (and I use the term loosely) been so much fun (certainly much more so than Fox’s feeble freshman The Cool Kids).  The first streaming effort from mega-producer Chuck Lorre, the man responsible for such three-camera broadcast comedies as Two and a Half Men, The Big Bang Theory and Mom, frisky Kominsky seems to have been a hit out of the gate.  Michael Douglas (below left) has returned to series TV after an absence of 40 years, and his portrayal of Sandy Kominsky -- a once-hot actor now working as an acting teacher while navigating love, loss and a problematic prostate on the mean streets of Beverly Hills -- ought to bring him an Emmy Award next year.  Alan Arkin (below right), as his longtime best friend Norman, is equally fine, and Nancy Travis, in a dramatic change from her other gig on Fox’s bland Last Man Standing, all but steals the show as Lisa, a recent divorcee who falls for Sandy but maintains her independence.  Added bonus:  Recurring appearances by Susan Sullivan as Norman’s caustic wife Eileen, who passes on in the premiere but returns to visit her grieving husband from time to time, and Ann Margret! 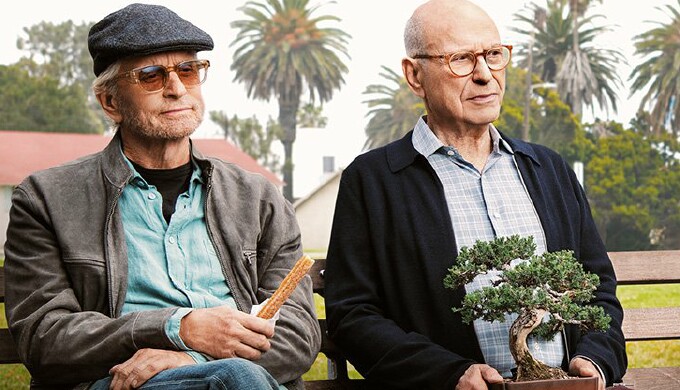 Still crazy after all these years, and timely as ever, nothing provokes fits of laughter and bouts of outrage quite like South Park,and it has showed no signs of slowing down in season 22.  Mr. Garrison is our orange-tinted president.  Caitlyn Jenner is the First Lady.  P.C. Principal, now overseeing South Park Elementary School, and Strong Woman are the proud parents of five P.C. babies, who wail in maddening unison whenever they hear a word that somebody somewhere might consider inappropriate (watch this clip).  Towelie (pictured at top) is now an official marijuana quality control officer in Colorado.  Having some fun with school shootings (while making important points) might have been taking things too far, but then again maybe not.  The same with the banishing of Mr. Hankey the Christmas Poo (pictured below), whose behavior in the title town was deemed unacceptable after he behaved like Roseanne Barr on Twitter. 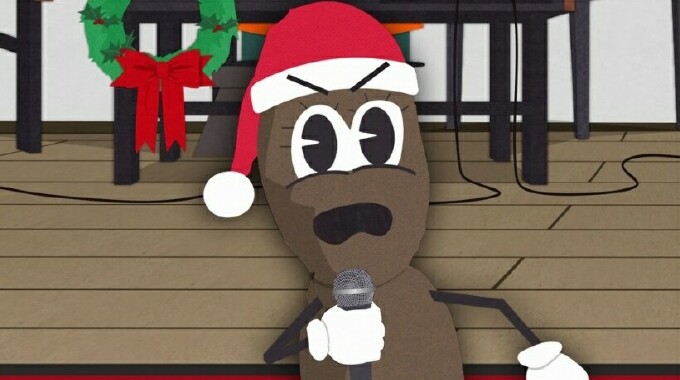 The tag line for season 22 is #cancelsouthpark, as advertised on billboards throughout L.A. (below).  Heaven forbid! 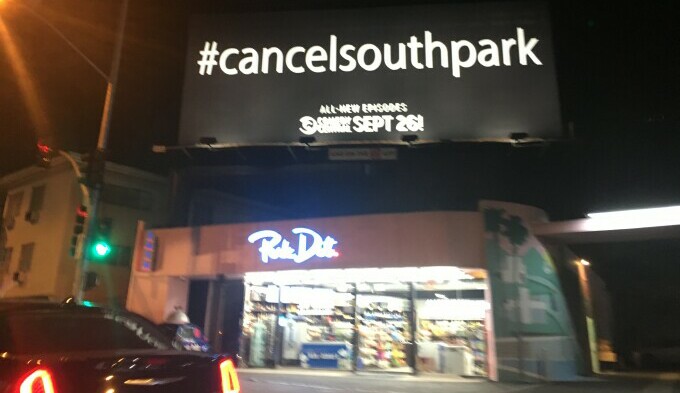 After all, who else but series creators Trey Parker and Matt Stone would take on the controversy that boiled up this year about the character of Kwik-E-Mart manager Apu on The Simpsonsby sending the freshly exiled Mr. Hankey off to Springfield to start anew?  Or bring a terrifying Jeff Bezos (below) to town to take over the local workforce? 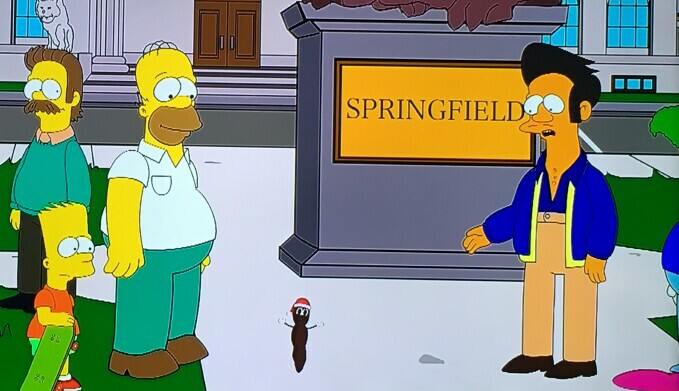 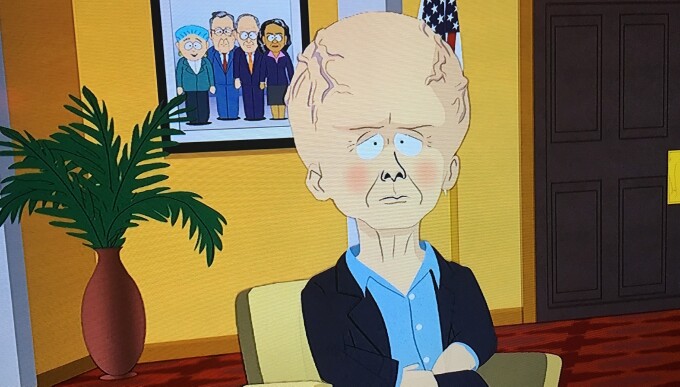