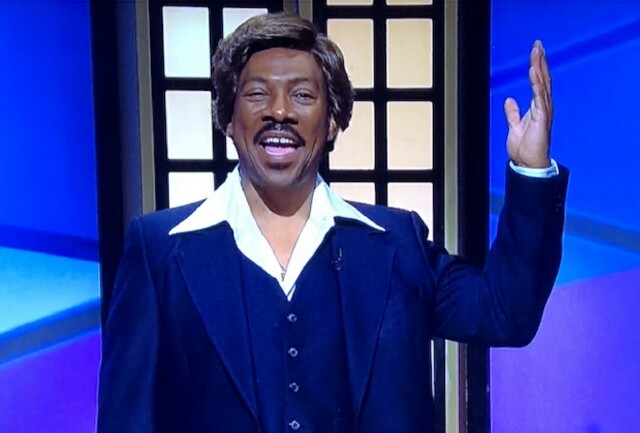 I know what you're thinking.  Does that headline above really read Top 26  programs of 2019?  Didn't I just publish a five-part series naming the Top 25  programs of 2019?  Yes, I did.  (They are listed below in one convenient location, each title linked to the column containing my year-end review of the show.)  But that list was put together before Saturday, when one of the best programs of the year was telecast.  Heck, it wasn't just one of the best ... it was the funniest telecast of any kind in 2019 and a TV phenomenon the likes of which we hadn't seen since the finale of Game of Thrones last spring.  Of course, GoT was the epic conclusion to a story ten years in the telling.  This was just another episode of a show that has been running for 45 years.  Or so we thought.  I mean, I think we all knew it would be great ... but the final Saturday Night Live  telecast of the decade, hosted by Eddie Murphy, proved to be much, much more than that.

You see, long before political correctness, digital influencers, Millennial sensitivities and trial by social media there was Eddie Murphy.  When he joined SNL at the dawn of the Reagan Era at the tender age of 19 nobody knew who he was or what to expect.  SNL was teetering on the verge of cancellation at the time, but Murphy supercharged the show with characters so potentially controversial it can be argued that no young comic could launch them today.  It was a different world then, and as long as the players on SNL didn't drop f-bombs they could get away with damn near anything. 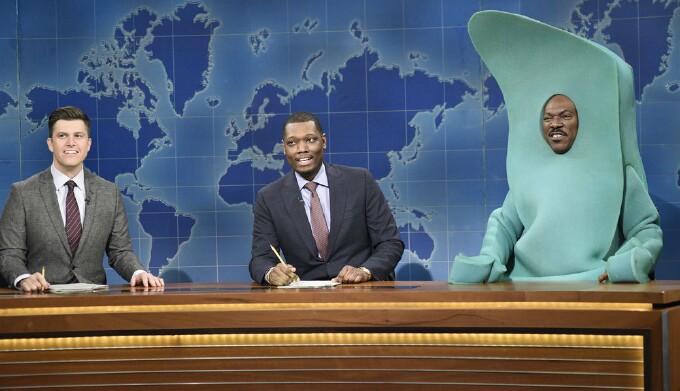 Murphy left SNL an inconceivable 35 years ago, but watching him on Saturday it felt as if no time had passed.  He brought his four best-known characters back with him: Mister Robinson, Buckwheat, Gumby (pictured above with Weekend Update hosts Colin Jost and Michael Che) and Velvet Jones (pictured at top), along with a few friends, including (below, left to right with Murphy) Tracy Morgan, Dave Chappelle and Chris Rock.  The results were magic. 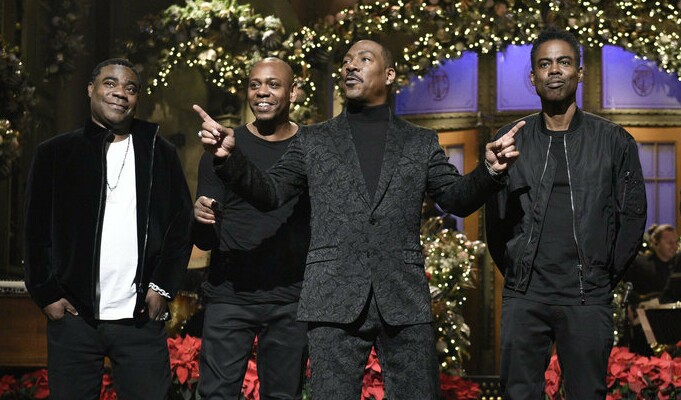 It had been three and a half decades since I had stayed up to watch and wait for what Murphy would do next on SNL or anyplace else.  By 1:05 a.m. I had a headache from laughing so much, and from engaging so much on Twitter, where the second coming of Murphy was trending with the best of them.  I went into New York City from Connecticut on Sunday morning, and on the train I heard people talking about Murphy's appearance.  Then I noticed that the guy sitting next to me was watching Murphy's sketches from the night before on his phone.  As I later moved around Manhattan I heard more Murphy talk.  Even at the Ethel Barrymore Theatre, where I took in a matinee, I heard people talking about Murphy, before the show and during intermission.

It certainly felt like a broadcast television world again -- one in which everyone watched certain things at the same time and then talked about them the next day.  Which brings me back to my list.  I can't leave this utterly amazing television experience off of it.  So I'm expanding the list to 26 and giving Eddie the No. 5 spot, because he made me laugh more than I have in a long time.  Is it too early to start a campaign to get him back during SNL's 50th season?  It's coming up fast.

When They See Us (Netflix)

What We Do in the Shadows (FX)