Things are Stranger (and Cooler) in Virtual Reality 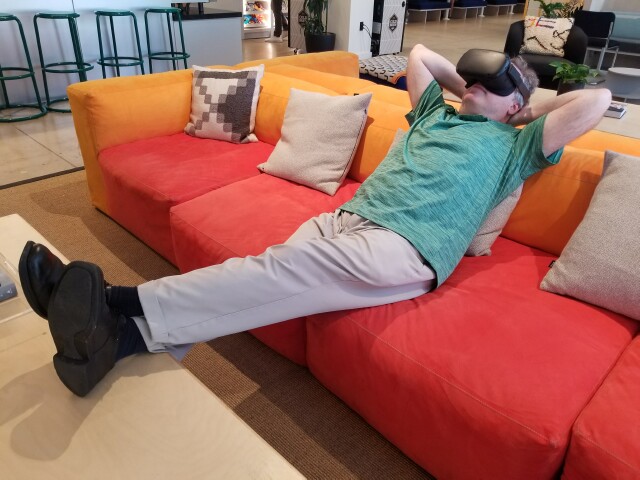 If you are among the 18.2 million people that completely binge-watched Season 3 of Stranger Things over the holiday weekend or part of the 40.7 million currently enjoying it -- a new Netflix record -- I am willing to bet that only a minuscule percentage of you viewed it the way that I did.  Over two days, I spent nine hours watching the '80s nostalgia-filled, sci-fi thriller in virtual reality through the Oculus Quest, the recently released wire-free, self-contained (meaning no need to dock a mobile phone into the device), sensor-included, free-roaming, affordable ($399), head-mounted display.

I've been testing the Quest over the past month and will be writing my full review, along with a few of the other new entrants, in a subsequent column.

Suffice to say that the Oculus Quest has quashed the "VR is dead" contingent and is selling well across all channels.  As I've learned in my random conversations with a few Best Buy managers, the devices have been selling so quickly that they are having issues keeping it in stock.  On Amazon, the reviews are superb with around 600 reviews collectively between the 64GB and 128GB versions at a 4.5-star rating.  On Best Buy's website, both units are, as of this column, sold out with an average 4.8 rating and 540 collective reviews.

When people think of use cases for VR, they think of gaming.  I've come to recognize that having a giant, almost IMAX-sized screen available anywhere you are is also pretty cool.  By my estimate, the screen size is equivalent to approximately a 110-degree screen, give or take.  It certainly simulates the feeling of a movie theater-going experience and positions you in the best seat in the house.  The Netflix app, which is widely available across VR ecosystems, is one of the core apps available for Quest users.  It places you in a comfortable couch setting with a lovely mountain.

While I have spent some time watching shorter episodes across a spectrum of VR devices on the Netflix app, Stranger Things: Season 3 is filmed so cinematically that I felt compelled to test my VR endurance and binge watch the entire series through the Quest.  I once heard Steven Spielberg famously rant against mobile video, saying that he makes films for large screens, not four-inch screens.  While I will not deride anyone from watching Netflix across multiple devices, there is certain content that is truly enhanced by the scale of a large screen -- and monster movies tend to fit that bill.  Oh, and while to me it was a very large screen, to the outside observer, it was still those small lenses.  That's the magic of VR.

I did break the viewing up into two days because I was invited to a Fourth of July BBQ and the only things that can tear me away from a good binge event are chicken wings, burgers, margaritas and good friends!

The biggest Achilles heel of VR is that damned screen door effect (SDE).  The SDE is the appearance of microdots across the picture, which are caused by a combination of the space between the pixels, your proximity to the lens and the refresh rate of the video.  When this generation of VR was first introduced, the screen-door effect was significant.  In fact, I can recall getting a preview of the Samsung Gear VR and I believe my comment was "it's cool, but the SDE looks too much like a View-Master."  The picture on the Oculus Quest is much improved from that, but it is still there.  Currently, there is only one VR Headset, the Varjo, that claims to have completely solved the SDE, but that headset is currently priced over $5K and I have not had the opportunity to demo it yet to provide an honest opinion.  I can say that while the screen door effect is there, it is so minimized that the pluses of viewing on a movie screen outweigh the slight distraction.  There is a sense of scale with the scenes that take place within the Starcourt Mall and within the Fourth of July carnival that demands a wider view and immersing yourself within the scene, which brings me to the second benefit that I realized: attention.

How many of you really watch movies at home on TV anymore?  I mean watch in the deeper sense of putting away all your distractions and focusing, truly focusing, on the story being told, the acting, the costumes, the sound; every aspect of what a director's vision is for you to experience.  My bet would be that quite a few of us, myself included, rarely get to experience that in this hectic world in which we live -- and with our Pavlovian responses to every beep or buzz that our phone makes.  What I noticed throughout my VR binge was that I was not tempted to look at my phone or distracted by kids or visually out of tune by any surrounding shifts in the peripheral environment.  Physically, I couldn't.  I was perfectly, beautifully immersed and focused on the content.  And that content included some major brand integrations, including the re-introduction of New Coke (they actually have brought New Coke back in conjunction with their integration, which makes me wonder if Sergio Zyman has, in some way, found redemption), extensive Burger King exposure and JCPenney, to name a few.  Those placements, for the most part tastefully done, may have appeared much more subtle if I had been watching this on a 40" to 50" screen but, in a good way, they appeared a bigger part of the story.

I made a conscious decision not to wear headphones.  The Oculus Quest has built-in spatial audio, which, in general, is an absolute imperative to trick your brain to believe that you are truly in a different universe.  I was generally pleased with the quality of the audio.  I could hear the footsteps of the Mind Flayer behind me.  The fight scenes (oh c'mon, you knew there were fight scenes -- that is not a spoiler) sounded authentic and the sound of weapons came across from the right direction, appropriately moving between ears.

I was really pleased with the overall experience, but I am not suggesting that every piece of content should be viewed on VR.  I am pleased to report that I had no headaches, no eye strain, no nausea and no discomfort from wearing the headset for a long period of time.

If for some reason you haven't already watched it, I highly recommend trying Stranger Things: Season 3, especially if the '80s were your "era" and you have a VR headset.

The Consumer Tech Association recently released its five-year projections for AR/VR headsets.  They differ considerably from a year ago when the CTA had projected that by 2022, 21.9 million devices per year would be sold in the U.S.  Now, the CTA has a mostly flat projection with devices sales in the U.S. only reaching 3.1 million per year by 2023.  The difference in these projections was so large that I had to reach out to the CTA to find out what was going on.  They owned up to their overzealous previous projections based on the marketing push that top CTA member organizations (Samsung, Sony and others) had been making to jumpstart the VR industry.  This year, they felt the need to bring their base into reality and be far more conservative in their projections.  They also said that in an industry as nascent as VR, you must project often, as one new product, perhaps the Quest, can take off and redefine the entire category.

My experience with the Quest overall and viewing Stranger Things leaves me far more optimistic than the CTA's current projection.

Every major shift in media consumption has been immediately preceded by a shift in bandwidth.  With the seeming success of the Oculus Quest, the PlayStation VR and a number of solid competitors on the way, the odds appear to be better that the shift to 5G, with its low latency and gig-per -second download speed, will coincide with a drop in overall price for a quality headset closer to a $250 price point within two years.  At that price point and with the improvement in video quality that time will bring, we should begin to see scale.  That gives brand storytellers a window of opportunity to test and learn how to integrate virtual reality into their communications and sales channel mix -- but the time to begin is now.

At this moment, VR remains a tactical tool for brands and, when used strategically, can make a tremendously strong impression.  There's nothing strange about that.