Three Magazines for a Year for Only $7. What's Happening Here? 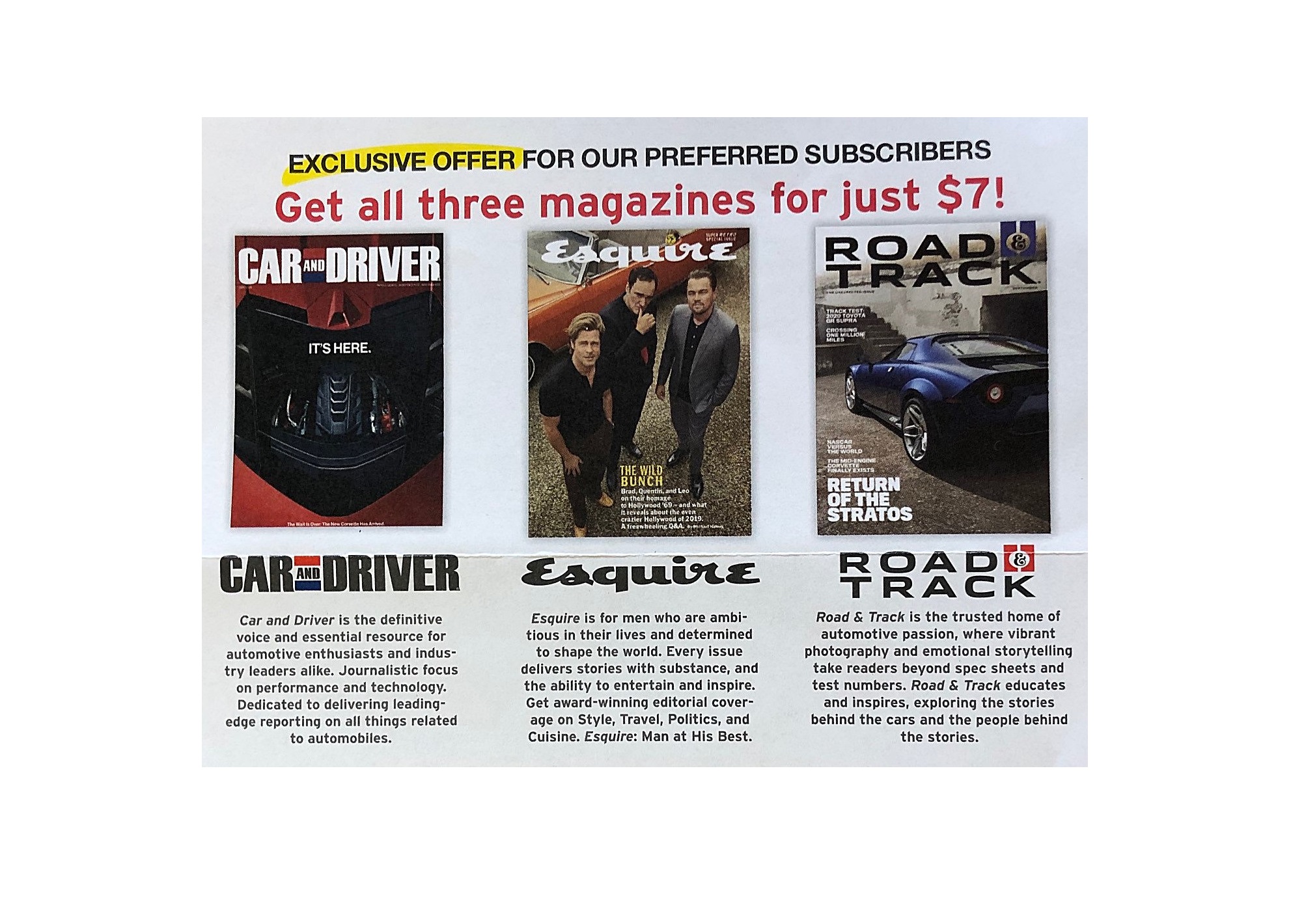 The offer was striking: not one, but three annual magazine subscriptions for a total of just $7. I'd get Hearst publications Car and Driver, Road & Track, and, thrown in, Esquire. The combined annual cover prices amount to $199.72, which means I was saving $192.72. Heck, some issues of CD go for $7.99 on the newsstand.

A quick back-of-the-subscription-offer-envelope calculation, keeping in mind how frequently the three magazines are published, yielded a $7.56 cost of mailing the publications second class, if this is accurate; 27 cents is the average cost of sending out a periodical.

The conventional wisdom is that these loss-leader offers pay off in the long run in the form of impressive circulation numbers and higher ad rates, but is that just wishful thinking in today's market? Some experts think so.

The concept is "juicing circulation numbers with lower-cost subscriptions, often sold through third parties, in order to increase advertising rate bases," says Greg Dool, senior editor at Folio. "This is generally viewed as an outdated tactic now, as print advertising has become much less of a profit center. Meredith Corporation [a major Hearst competitor] has emphasized on recent earnings calls that it's focused on moving away from 'lower-value' circulation in favor of direct-sold, higher-priced subscribers and newsstand sales, which have bigger margins." 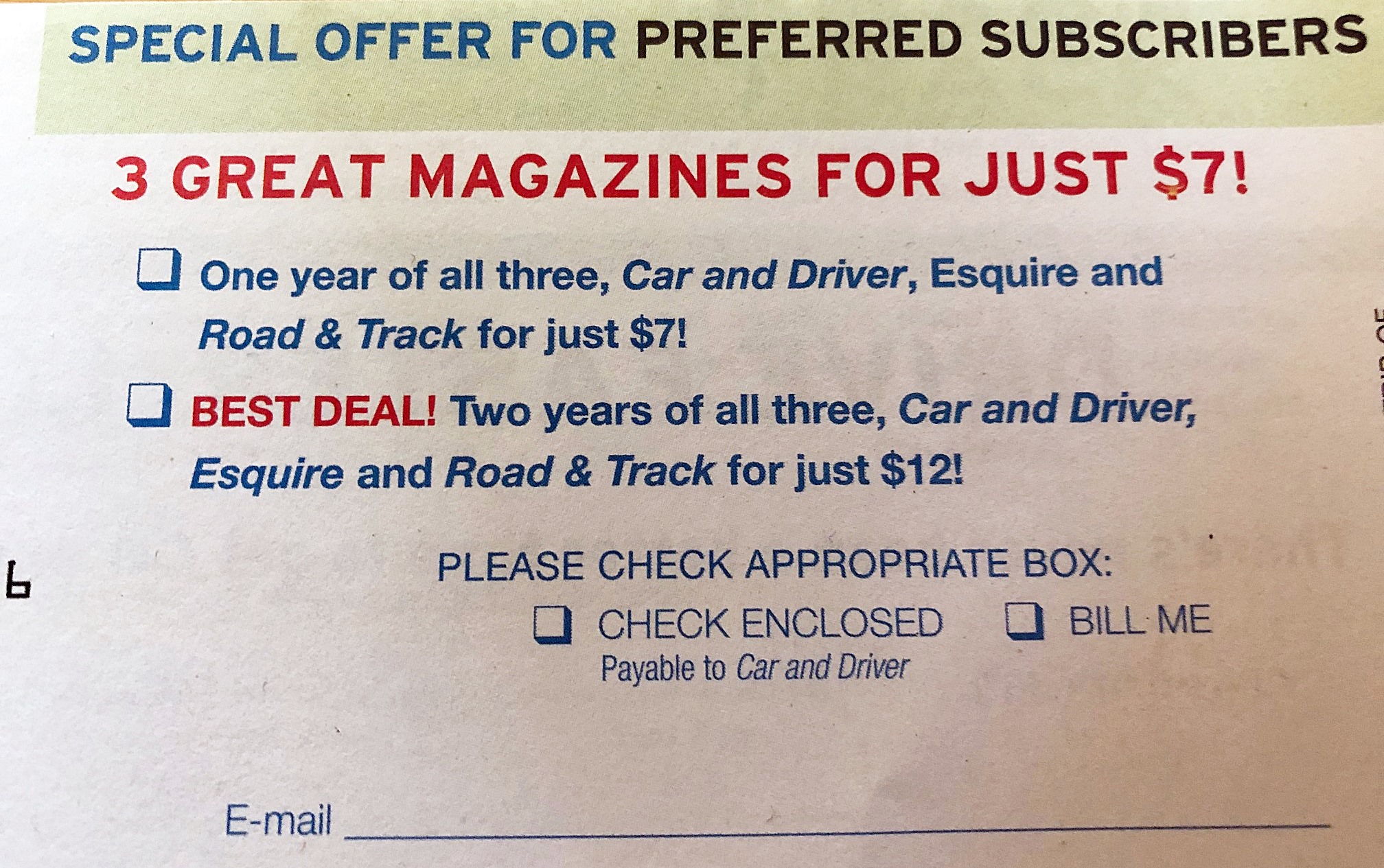 Dool's colleague Caysey Welton, the content director of Folio, agrees. "Padding circulation numbers is outdated, but still not completely frowned upon because smart marketers do see value in pass-along rates and raw scale."

And there's another benefit: data profiles. The information gathered from subscribers "is worth more than the revenue a lot of publishers collect from subscriptions, unless we're talking about a high-dollar product like Harvard Business Review," Welton says. "The more complete audience data Hearst can collect and leverage, the more valuable they are to marketers looking for massive cross-brand [and] cross-platform buys."

Circulation is not generally the biggest problem at the best-known car magazines. CD reports a total print circulation of 1.2 million, with 97.1 percent of that from subscriptions. R&T is behind, with a print circulation of 581,986. Not terrible, but as I reported in "The Last Days of the Print Car Magazine" and "WeatherTech Proves That Advertising — a lot — Works" the magazines have a big problem attracting ads from automakers distracted by digital opportunities, and the only consistently big ad-space buyers are Tire Rack (tires) and WeatherTech (floor mats).

Davis says car magazines generally "have circulation that is too high relative to the quality of the reader they can deliver." High circulation was a big plus when it attracted high-paying advertisers, but those days appear to be gone for the auto books. That said, Davis says that Hearst has generally been "the most responsible of the major publishers in providing good, qualified circulation for print products."

Car magazines are certainly not alone with advertising challenges. Revenue of $25.9 billion in 2019 represented a 4.2 percent annual growth decline in U.S. magazine and periodical publishing since 2014, reports a November 2019 IBISWorld analysis.

"Persistent declines in print advertising expenditure have driven a steep drop in revenue for the magazine and periodical publishing industry," IBISWorld said. "As consumers have gravitated toward digital-only publications, magazines have struggled to maintain readership and attract advertising revenue."

CD and R&T, both now based in New York, have the same sales team: Felix DiFilippo, sales vice president, president, and chief revenue officer; and Cameron Albergo, associate publisher. Neither responded to queries. I also didn't hear back from the team at Esquire (circulation 709,575, which is actually up from the 698,937 it was in 1995).

Publishers report fairly bad results from farming out subscription offers to third parties. "We would get something like $1 for each subscription sold door-to-door," says Doug Moss, who was publisher of E: The Environmental Magazine, a print publication from 1990 to 2013. (I served as editor in some of those years.) "We'd take a complete bath, and those people never renewed. Direct mail always brings in less than you spend on it — that's just how publishing works — but working with these firms was really not worth it."

Moss also notes that direct mail worked better the more publishers put into it, although a 1 or 2 percent response rate was typical. "If we sent out just a basic postcard, the costs were lower upfront, but they brought in casual subscribers who didn't renew," Moss says. "The more sophisticated the offer, with information about the magazine, the higher-quality subscribers we brought in."

With that in mind, the three-for-one magazine offer I received is sophisticated, with blurbs on each of the publications and descriptions of their content. "Man at His Best" in Esquire, the blurb read, is "the ultimate lifestyle guide for the sophisticated man."

I took the plunge and subscribed to the three magazines for $7. I'll have to monitor them carefully, as I do all subscriptions. CreditCards.com reports: "If you aren't vigilant when you sign up for a great magazine subscription deal or a free trial offer on healthcare products, it could haunt you for months or years, ringing up endless charges on your credit card through automatic renewals. 'Companies sometimes make it very easy to auto-renew and very hard to stop a renewal,' says Lauren Sanders, associate director of the National Consumer Law Center."

The lawsuit doesn't target CD or R&T, and the Hearst mailing doesn't say anything about automatic renewals in the fine print. But an R&T print offer on Amazon (for $5 a year) says, "Your subscription will renew at the end of the current term. Before it renews, we will send you a reminder notice stating the term and rate then in effect. Cancel anytime."

In any case, I'm sure I'll read the publications. Car and Driver's editorial style is sometimes overheated for me, and Road & Track has too much track and too little road, but they're still good magazines. Esquire I haven't checked in on for a while. That's part of the problem right there.