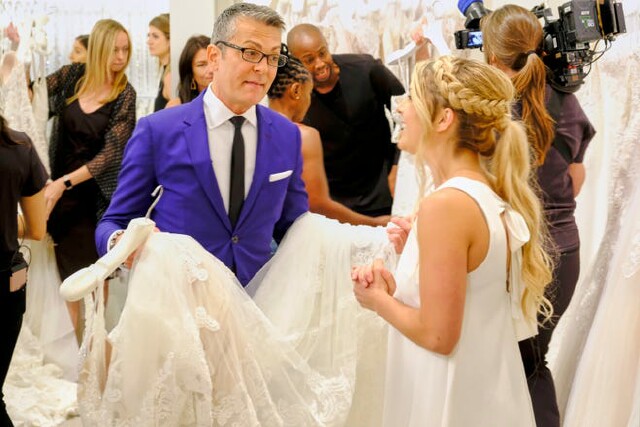 Saying “yes” to the dress and “I do” all within 48 hours sounds more like the makings for a tacky Vegas wedding than a storybook affair in Central Park.  That sort of turnaround usually means whatever you happen to be wearing is good enough, and an Elvis impersonator will do the honors.  However, a few months back 52 brides landed in Manhattan on a Monday and by Wednesday they were wed in designer gowns in front of Bethesda Fountain.

Randy Fenoli, TV host, designer and every bride’s best friend, officiated at the massive July 10 wedding.  That episode of TLC’s ten-part event series Say Yes to the Dress: America, featuring brides chosen from each state, Washington D.C., and Puerto Rico, will be telecast on March 14. 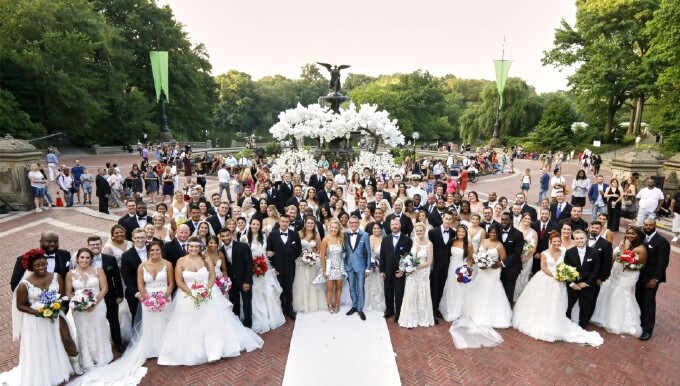 “You can’t even imagine the challenges to coordinate travel arrangements from 52 (places) with 104 people,” Fenoli recently told MediaVillage.  “Coordinating those flights and the car services to pick them up and getting them to the hotel and the salon and all of the events and getting their hair and makeup right – there was some drama there.”

Even with the dizzying logistics, it all came off without a hitch, TLC president Howard Lee shared, exception for one incident -- a groom passed out.  The ceremony was on a typically humid New York City July day, and the weather did him in.  Still, even that couple wound up tying the knot.  Each bride was outfitted from the Manhattan mecca of satin and lace, Kleinfeld Bridal.  CEO and co-owner Ronnie Rothstein pulled off this feat by having seamstresses and beaders working into the wee hours to ensure each bride had the look she envisioned.

“This show is focused on inclusion,” Rothstein said of the 52 brides, including two in same-sex marriages.  “I spent time with the brides.  This was very inclusive of every culture and background.  You could see the personalities.  Everybody was different.”

Rothstein made sure the salon was stocked with gowns up to size 30.  (Most wedding gowns still use traditional women’s sizes, so someone who usually wears a 6 would be a 10 in bridal salons).  Along with his consultants, Fenoli was committed to finding each bride’s perfect dress, even if the process didn’t mesh with his ideas.

Fenoli, who sewed his first dress at 9 and has a classic sensibility, explained that there is such a thing as too much skin revealed on a bride.  “I want every bride to feel beautiful and confident on her wedding day,” he said.  “It is her day and her decision to make.  However, if it were my daughter and everything was hanging out walking down the aisle, and we have her grandmother and great aunt there … it is not the honeymoon!  Give it some respect for one day.  I am not a fan of being overtly sexy.  Audrey Hepburn was sexy.  Grace Kelly was sexy.  But they were never vulgar!  God, you want to feel sexy on your wedding day, but half-naked?  No.  A lot of times I have to bite my tongue and then go home and have nightmares.”

Everyone involved stressed how important each woman’s individuality was.  Over the years, some 1,200 brides have been featured on the series.

“We wanted to make sure that we got the message across that we weren’t reinventing Say Yes to the Dress,” Lee said.  “We are the brand and the home of all things wedding.  We are top of their minds for being engaged, post-engagement, wedding and even after.”

After 17 seasons, the original show is so popular that Fenoli, who was not involved in picking the brides, explained how some people try to game the system just to appear on the show.  As a result, the production company and the network do a “pretty rigorous vetting process, and part of that is actually making sure they are getting married,” he said.  “A lot of people slip a ring on the finger and just want to be on the show.  They have to submit a video that tells some sort of story the network and production company think will be interesting to the viewer.”

Say Yes to the Dress, which has a constantly renewable audience, is one that mothers and daughters tend to watch together.

“In my dreams I would never want to see it go away,” TLC’s Lee acknowledged.  “Say Yes to the Dress is so meaningful for so many men and women.  This is the biggest moment of their lives. The show has always captured that and is emblematic of the entire process, the traditions, what the bride has always wanted for her magical day.  She gets to do this once and she wants to make the most out of it.  I know our audience always turns to us.”

Say Yes to the Dress: America is telecast Saturday at 8 p.m. on TLC.