TNT's "Animal Kingdom": A Mad Mix of Control and Chaos 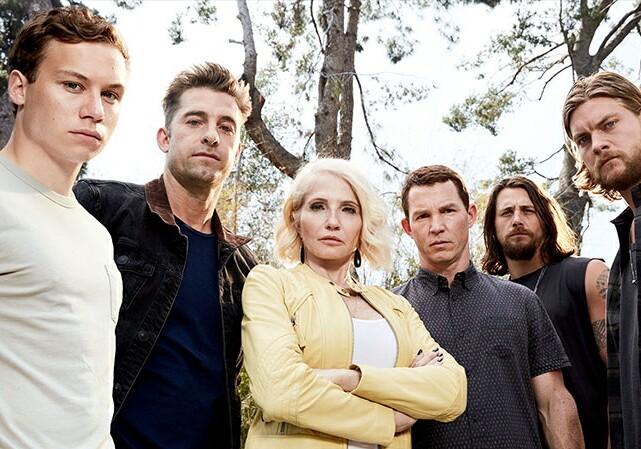 The first time I saw TNT’s Animal Kingdom it was for just a couple of minutes, and I was in a noisy, overcrowded bar.  I wasn’t able to hear anything that was being said over the loud music, but I could read the closed captions that appear when TVs are muted.  And though I had no idea what was happening or who the characters were -- and was only at the bar for a date in the first place -- I just couldn’t tear my eyes away.  Whenever I wasn’t pretending to listen to the person next to me, the captivating visuals and seemingly intense pace had my full attention.  At the time I was only vaguely familiar with the show because of some promotional material I’d coincidentally crossed paths with during my everyday life, but I do clearly remember thinking to myself (as I actively ignored the person I was supposed to be entertaining), “If this is how gripping this show is when muted, it must be f**kin’ dope with the volume up.”  Well, I’ve now seen every Animal Kingdomepisode to date, and let me just say it feels good to be right.

Animal Kingdomfollows Josh “J” Cody (Finn Cole), whose heroin-addicted mother passes away from an overdose almost as soon as the first episode starts. This tragic event sends 17-year-old J to the home of his grandmother Janine “Smurf” Cody (Ellen Barkin) where he meets his four uncles: “Baz” (Scott Speedman), “Pope” (Shawn Hatosy), Craig (Ben Robson) and Deran (Jake Weary).  As it turns out, this SoCal family earns money in a rather unconventional way:  They’re criminals who pull job after job under Smurf’s direction in order to support the lavish and laid-back Californian lifestyle they all enjoy.  (Cole, Speedman, Barkin, Hatosy, Robson and Weary are pictured at top, left to right.)

In many ways, this series has a lot in common with other successful crime family shows (think Sons of Anarchyor The Sopranos), including the presence of internal conflicts within the group, a strong-willed matriarch and the constant threat of imprisonment for their various misdeeds.  AK,however, keeps things a bit more interesting by having viewers learn about this family at the same pace as J, its young protagonist.

As a newcomer to the house, J is an outsider even amongst his relatives.  The illegal nature of their work and their survival-influenced aversion to inclusion leads to the creation of a pretty hostile environment for him.  In fact, the most hostile aspect of J’s new environment is the constant intrusion in his life.  Smurf has a weird habit of popping in for the laundry as he’s getting dressed; creepy ass Pope does some unsettling staring, and even J’s teacher Alexa (Ellen Wroe) exhibits a somewhat unhealthy interest in his personal life. There’s also a quiet intensity that even the nicest-seeming people share, and an ever-present layer of suspense that either keeps viewers on their seat’s edge or serves as a quiet reminder that things could go south (in so many different ways) at almost any given moment.

The prevailing theme of the series is control. Creator Jonathan Lisco paints a compelling picture of people who all use each other in some equally unhealthy kind of way.  Smurf manipulates just about everyone she encounters, but no one more than her own boys.  She twists their desire for independence to seem like disloyalty and their shortcomings to seem like incompetence.  Their mutual “trust,” her doling out their earnings as an allowance, the competition she surreptitiously endorses between them -- they are all the marionette strings she uses to get the men to do her dirty work.  The group as a whole is badass, but she is definitely the mother of all badasses.

Smurf isn’t the only one who holds someone’s reigns, either.  Season 1 is built on the various forms of manipulation that almost every character takes advantage of.  How about Detective Yates (Nicki Micheaux), who unhesitatingly tries strong-arming J into wearing a wire?  Or what about Deran, a closeted homosexual who controls his love interest through emotional and physical abuse.  Baz and Pope are under Smurf’s control due to their mutual desire to receive her respect and affections, while Craig only seems to be controlled by his addictions.  Almost every single person in J’s life is controlling or under someone/something’s control, and all of them are so wrapped up in their own shit that no one realizes just how selfish they really are.  The only thing becoming increasingly apparent is the overbearing toxicity of all their relationships.

To the credit of the cast, every single character elicited a genuine emotional response from me.  It didn’t matter if I hated them, loved them, thought they were decent people in a bad place, or bad people pretending to be good; they all made me feel something.  I almost forgot I was watching TV, and fell heart-first into a suspense-filled world full of charismatic rebels living a high risk-high reward outlaw lifestyle that most people don’t have the cojones (or the reckless abandon) to even consider.  At the core of every episode there’s also a progressively intense feeling of anxiety that viewers experience as they wonder what’s going to happen to J who, at age 17, ironically seems like the only moral compass present.

Perceptions of certain characters change as the series goes on, but the whole time you’re either rooting for J to earn the group’s trust, or you’re screaming for him to get the hell out of there.  TNT’s Animal Kingdomfeels like just that: a kingdom of animals.  Smurf is on the family’s throne, her sons fight to be her successor, and only the strong-willed survive.  I haven’t enjoyed a show of this type to this extent in quite some time, and I’ve never taken someone named “Smurf” so seriously.

Animal Kingdom is telecast Tuesday at 9 p.m. on TNT.