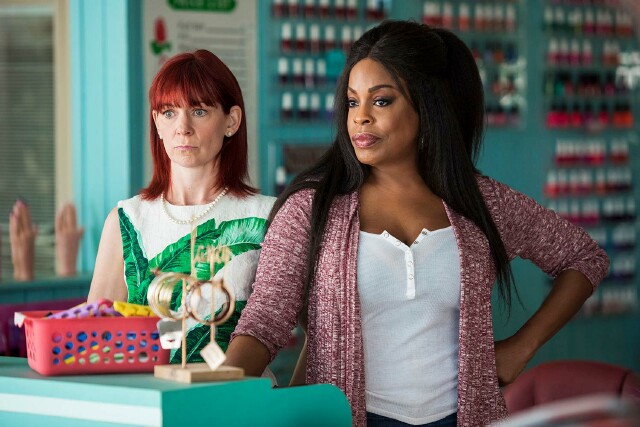 Let me go ahead and say this right off the top: Clawsis f**kin’ fire.  I know I’ve climbed to mountaintops and screamed similar things about other shows in the past, but I am truly enamored with Claws’writing, cast and visual style.  It’s creative, captivating and colorful in more ways than one.  Originally meant to be a 30-minute comedy on HBO, it was snatched up by TNT and turned into an hour-long dramedy.  After seeing the first four episodes (two of which have already been telecast) I can attest to the genius behind that decision.

Executive produced by Angie Tribeca star Rashida Jones, Claws centers on Desna (Niecy Nash, pictured at top right), who owns a quality South Florida nail salon with her three best friends.  Each member of this eclectic quartet has a uniquely appealing style of her own, with Desna serving as the fierce mama bear who runs their operation and protects her family-like crew.  Besides Desna, the group includes Jen (Jenn Lyon), Quiet Ann (Judy Reyes of Scrubs) and Polly (the always amazing Carrie Preston of True BloodandThe Good Fight, pictured at top left).

Jen is the modern-day iteration of the classic southern wife and mother trope.  She does nails in the shop and her loyalty to her husband and two daughters is only rivaled by her loyalty to Desna and the crew, and she takes no shit.  Polly also does nails at the shop and is the redheaded member of their crew who has just returned from being … away, for a bit. Her soft-spoken delivery is almost innocent in nature, but like her past there’s more to her than meets the eye.

Then there’s my personal favorite, Quiet Ann.  Reyes’s transformation into this particularly butch character is as astonishing as it is convincing. She’s the muscle in the mix, serving as both foot masseuse and security guard for the salon.  In contrast with the rest of the group, she dresses in more male-centric clothing and doesn’t talk a whole lot, but my favorite of her traits is how unapologetically Latina she is.  (Reyes talked with Jackie Cutler of MediaVillage.com about playing this lively character.)

There’s a scene in the pilot in which, as they open the salon, Quiet Ann turns on the radio and begins lip-syncing and dancing to a bachata song (and properly, I might add).  In that moment it occurred to me that I’d never seen someone do that on American television before.  When it comes to representation in American media, most Latin and Spanish-speaking cultures are combined into some sort of amalgamation meant to represent them all in a half-assed manner.  It meant a lot to me that such a specifically cultural action was given the spotlight, no matter how brief the moment was. 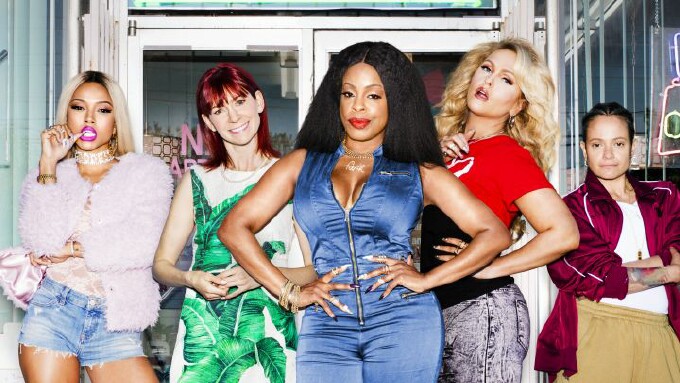 Additionally, there’s a typical urban Millennial type named Virginia who’s played by Karrueche Tran. (Tran is pictured above, left, with Preston, Nash, Lyon and Reyes.)  Virginia is a nail technician who took Polly’s place in her absence.  Upon Polly’s return she began exuding a pretty stank attitude and asking questions about the salon's extra-curricular work that initially gets her kicked out altogether.

That extra-curricular work, by the way, is money laundering.  See, Desna’s salon is one of many legitimate businesses utilized by Dixie Mafia crime boss Uncle Daddy (yes, you read that right) -- who’s played by Dean Norris (Breaking Bad) -- in order to “clean” the money made from prescription pill sales.  His nephew/adopted son Roller (Jack Kesy) manages the nail salon crew’s portion of the operation, and his sexual relationship with and empty promises to Desna about her compensation for her salon’s services are the catalyst that set the story’s most significant events into motion. Both Uncle Daddy and Roller are unsurprisingly abhorrent people, but it’s their familial relationship with the crew via Jen’s marriage to Uncle Daddy’s other son Bryce (Kevin Rankin) that makes things extra messy.

Supporting players like Dr. Ken (Jason Antoon), whose medical clinic works in tandem with the nail salon, and Dean, Desna’s mentally disabled yet hyper-intelligent brother, undeniably contribute to the series’ appeal. (Harold Perrineau is known for Criminal Minds, Lost and The Matrix: Reloaded, but my personal favorite of his many fine roles was Mercutio in Romeo + Juliet.)  Dr. Ken contributes through constant comic relief, and Dean contributes through his endearing relationship with his sister and her need to take care of him at any cost.

Which brings us to Desna.  Niecy Nash breathes so much life into this character that I can’t imagine anyone else doing it.  The show itself is bright, dark, colorful, ambitious, authentic and over-the-top all at once, and so is Desna.  She is the hilarious owner of her salon, the fearless leader of her crew and the determined creator of her own destiny.

Claws,besides being a clever name for nails, is a reference to the metaphorical claws that the aforementioned women willbrandish to protect their own.  This show simply checks off too many of the right boxes for me not to watch it.