To Boost D&I, Ad Industry Needs to Lean into Data 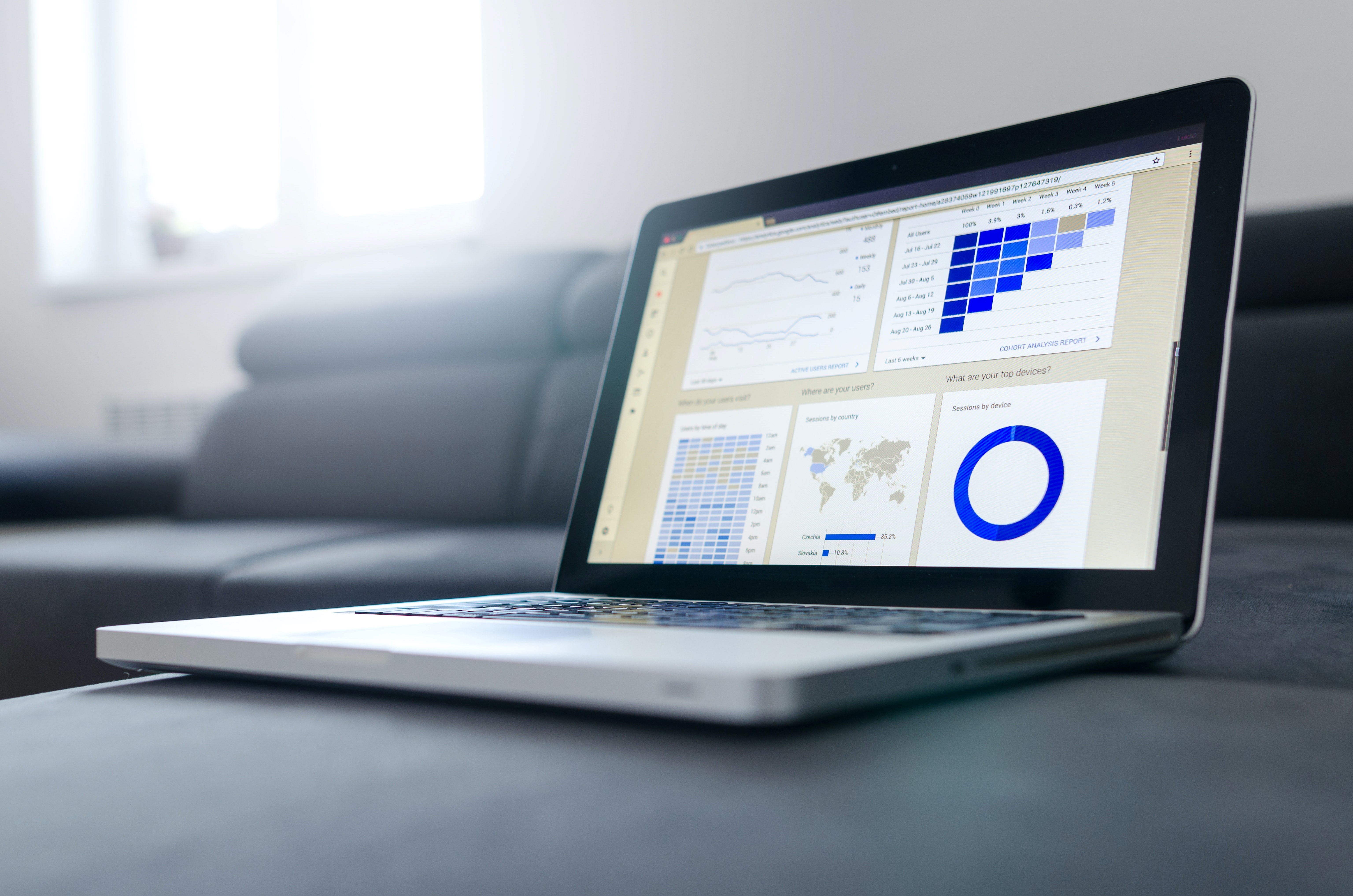 From ad agencies to brands, organizations are prioritizing diversity and advancement of women and people of color. But it takes action to produce real change. Recruitment, retention, and promotion require investment, execution, and measurement -- and buy-in from the C-Suite down. Data can help drive change. 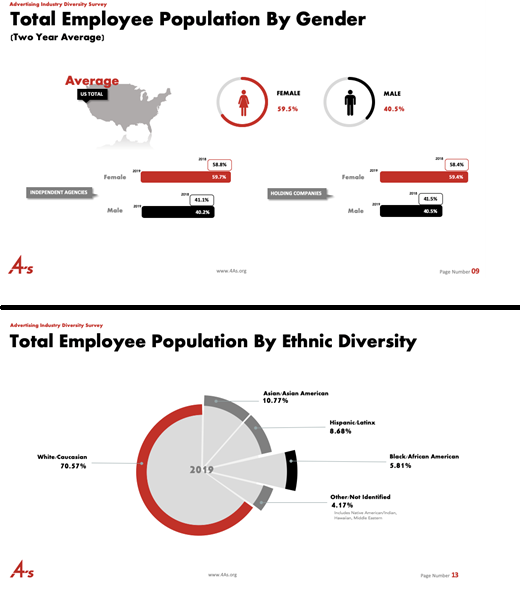 New figures from the 4A's Diversity Report indicates agency employees at holding companies and independent shops are predominately white, with 70.57 percent identifying as white/Caucasian, compared to 10.77 percent Asian American, 8.68 percent Hispanic/Latinx, and 5.81 percent African American. (4.17 percent did not identify or were classified as other races, such as Native American and Middle Eastern). Women make up the majority of agency employees, representing 59.7 percent of independent agencies staffers and 59.4 percent of workers at holding companies.

Organizations say they're committed to improving those stats, and they're holding themselves and their partners accountable. At the 4A's recent Equity & Inclusion Congress, top agency and brand execs representing diversity & inclusion, HR and marketing departments affirmed their commitments to multiculturalism.

They encouraged companies to take a four-step approach: set goals, create programs to nurture inclusivity and diversity, measure progress, and then hold the leadership accountable for achievements or shortcomings.

"If companies make this a business priority and treat it like a business priority, if they track, they hold people accountable, they set goals, they invest, this is a very solvable problem," Michelle Peluso, IBM's SVP digital sales & chief marketing officer said during a CMO panel at the 4A's' Congress. "Just like if I was going to enter a new market or introduce a new product line, I'd have clear clarity about that and set the conditions to make sure I succeeded."

In recent months, particularly since the killing of George Floyd by a former Minneapolis police officer, these conversations have taken on renewed importance, said GM's Global CMO Deborah Wahl.

"It galvanized the whole company," Wahl said. "We have to make sure our house is in order. We've been looking at recruiting and hiring, and we're not making enough progress."

Set Goals and Own Them

At the organizational level, many agencies and brands are setting targets for a diverse workforce, including people of color, women, LGBTQ individuals and people with disabilities, and publicizing these goals to employees, investors, and shareholders. At GM, Wahl said the company is targeting 40 percent diversity both internally and with their agency partners.

Procter & Gamble has a similar target. To get there, the company's Chief Brand Officer Marc Pritchard said firms should look at both representation in percentages and head count. At P&G, for instance, his brand division is just seven promotions away from a 50-50 split between male and female employees at every level. Data provides the critical intelligence to solve problems, he said.

Increasingly, brands are demanding their media partners share their diversity goals. Pritchard said agencies that advance multiculturalism are the preferred partners over the ones who don't make it a focus. Of course, agencies should be doing this on their own accord, but, in a hyper-competitive market where reviews seem to happen annually, they need to demonstrate commitment.

To hire and develop minority talent, Pritchard suggests media, creative and production companies should look beyond a candidate's portfolio and consider the individual candidate. "That's how we can break down systemic inequality," he added.

P&G is also investing in minority-owned firms, including suppliers, media companies and agencies.

At IBM, Peluso said her company endeavors to work with as many minority and women-owned companies as possible, calling it "business diversity."

"We look at the entire supply chain, where we're spending money and where we can do better," she said.

Get Creative to Inspire and Hire

When it comes to finding multicultural talent, a common lament is that there are too few candidates. That's a notion that P&G's Pritchard was quick to dispel as a "myth". "They are out there," he said. "You need to connect the pipes."

In a recent Leadership Conversation with MediaVillage, NPR's Chief Marketing Officer Michael Smith, who is African American, said that he fields inquiries from white executives at other organizations looking for qualified black candidates. Too often, Smith said, white hiring managers and executives recruit people who look like them and are from their network, squelching diversity. So, he is happy to help advance qualified peers.

"If you're really serious about this, then you're going to have to step out of your comfort zone," he said of building diverse teams.

At IBM, the company invests in developing its own minority talent. Its P-Tech initiative trains and educates underprivileged youth for careers in STEM fields, and has worked with more than 200,000 students worldwide. Grads have joined IBM as data scientists, programmers and designers. "It has been a huge source of talent for us," Peluso said.

To identify prospects, Peluso said managers should consider skills over degrees and academic pedigree. "With technology…so many of the jobs are skills based and you can get those skills in so many places, not necessarily with four-year degrees. Leaning into that bias we have is important."

To boost education, MediaVillage is coordinating a $100 million, 10-year investment goal to expand the industry's activation of diversity and educational programs, including online resources and forums with industry leaders, including MeetingPrep.com, an online training program for professional development.

While better hiring is key, advancement is equally important. The 4A's report indicates that agencies may be hiring more multicultural workers, but they're losing them to other opportunities. That leaves a gap in mid-level and executive ranks.

The bulk of minority employees at agencies hold entry or administrative level positions, including 68 percent of Black employees, 62 percent of Hispanics and 58 percent of Asian Americans, compared to 50 percent of white employees. In contrast, minorities are severely underrepresented in "C-Suite" executive ranks, with 87 percent of those roles occupied by white individuals, compared with 6 percent Asian American, 5 percent Hispanic and just 2.8 percent African American, the 4A's reported.

"This has to be everyone's responsibility," she said. "When a manager comes and asks 'Why aren't I seeing a more diverse slate of candidates?' or 'Why can't I hold on to any Black employees?', you can turn the conversation around and ask the same question, 'What are you doing to help in that area?'"