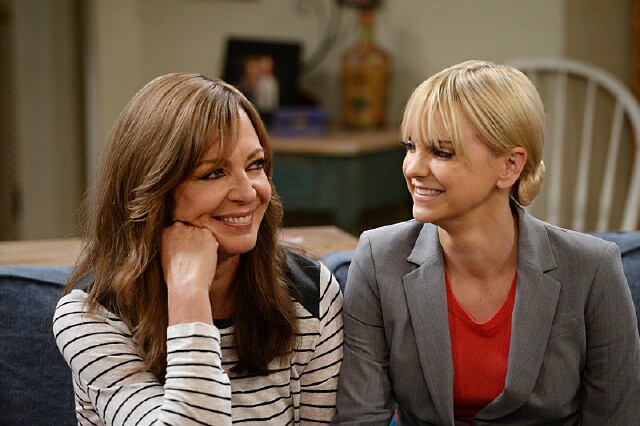 Beginning with its very first episode, CBS’ “Mom” has earned its reputation as the closest sitcom we have today to the Norman Lear classics of the ‘70s, which include “All in the Family,” “Maude,” “Good Times,” “One Day at a Time” and “The Jeffersons.” Through a combination of fearless (for its time) writing and bravura performances, most of Lear’s shows created vivid characters and told stories to which much of the viewing public could relate (or could learn from). The acting in all of them was uniformly first rate. Regular visitors know that here on Planet Ed we place “All in the Family” above all of the others (in fact, we place it above all shows in the history of television, though we often consider putting “The Mary Tyler Moore Show” at the very top of the list). “Family” is king because it was the perfect show for its time, because it helped multiple generations begin to finally understand each other and because even when it was blisteringly funny it could frequently and believably turn deadly serious in an instant, reminding viewers that the situation at hand wasn’t so humorous after all.

“Mom,” about mother and daughter addicts in recovery, is the only sitcom on television today that has perfected the Lear Toggle between broad topical comedy and deeply emotional drama. Other comedies change tone from time to time, but when they do they tend to do so in what have come to be called Very Special Episodes. “Mom,” on the other hand, shifts gears all the time as it tackles such issues as alcoholism, drug use, spousal abuse, teen parenthood, homelessness and, most consistently, the economic pressures under which most Americans have been living in recent years. “All in the Family” explored these issues and others way back in the ‘70s, but few comedies have managed to do so with the same success in the 40 years since.

Perhaps its’ most impressive quality is that for all of the humor “Mom” mines out of very unfunny subject matter – the devastation of addiction and the challenges of recovery – it constantly reminds viewers that these are gravely serious issues. The February 18 episode really drives that point home. It’s a shocker, to say the least, and its likely to leave viewers quietly thinking about what they just watched.

Executive producer Chuck Lorre and his team worked with Surgeon General of the United States Vice Admiral Vivek H. Murthy on a public service announcement about addiction that will run at the end of the episode. That was a smart and valuable move. 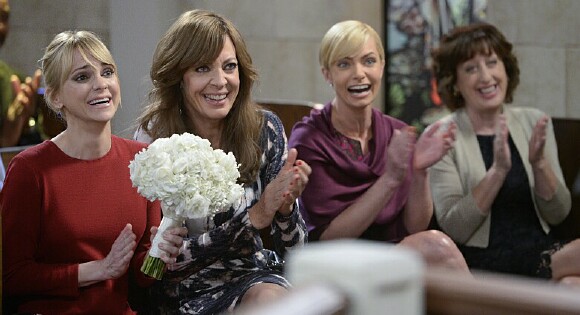 All of this makes “Mom” something of a blessing as television comedy goes. It is actually about something, and its various lead, supporting and recurring players all represent people that most of us know (if not ourselves). Anna Faris, as Christy Plunkett, who in her sobriety is slowly learning how to navigate her own life and understand who she is, and Allison Janney as her mother Bonnie, a strong woman with a lot of junk in her past but little baggage to show for it, are turning in flawless and fearless performances that can stand alongside those of such Lear stalwarts as Carroll O’Connor and Jean Stapleton in “All in the Family” and Beatrice Arthur in “Maude.” The rest of the regulars on “Mom” – Mimi Kennedy, Jaime Pressly and Beth Hall – are similarly fine. (Janney and Faris are pictured at top, and directly above with Pressly and Hall.) 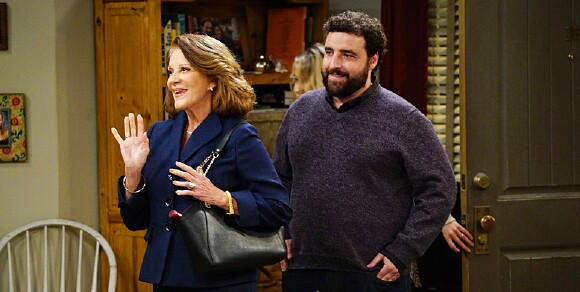 Perhaps overlooked in all of the praise for “Mom” and everything it represents is the fact that it seems to have become the go-to sitcom for accomplished actors to stretch in expertly constructed guest and recurring roles. Recent guest stars of note have included Ellen Burstyn (as Bonnie’s long-absent mother), Rosie O’Donnell (as one of Bonnie’s many past lovers), Linda Lavin (as the sharp-tongued mother of Christy’s daughter’s boyfriend) and Joe Manganiello as an alcoholic hunk navigating the first steps of recovery. It would be nice to see all of them return. If Burstyn and Lavin aren’t nominated this year for Emmy Awards in the category of Outstanding Guest Actress in a Comedy Series we’ll know the something in the system is broken. (Lavin and recurring guest David Krumholtz are pictured above. Manganiello and Faris are pictured below.) 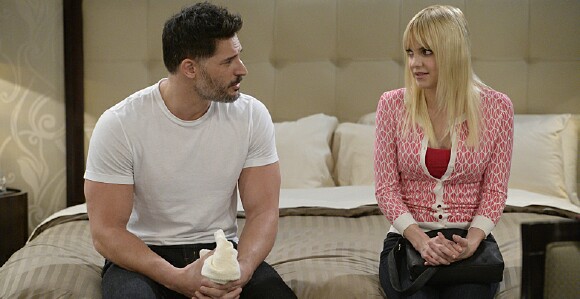 Rhea Perlman joins this impressive list of guest stars on tonight’s unforgettable episode; she’s hilarious in a story that turns out to be anything but. On any other show an episode like this one might be a game-changer, but on “Mom” it’s just another powerful chapter in the ongoing narrative of fully developed, three-dimensional, adult characters who are making a difference in each other’s lives and quite likely in the lives of many viewers who have come to care about them.