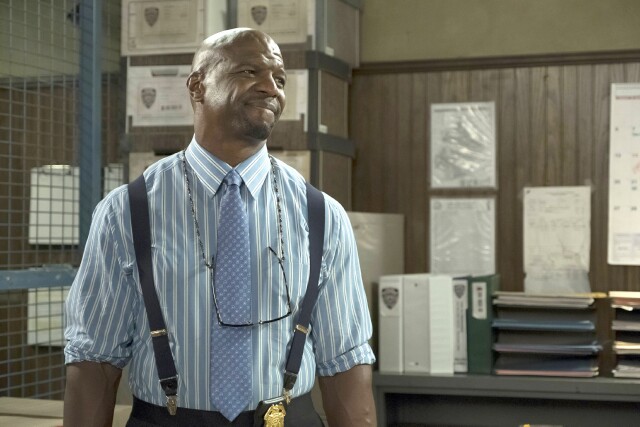 It’s no secret thatBrooklyn Nine-Nineis one of Fox’s powerhouse comedies. In my opinion it’s one of the best sitcoms on television. On its award shelf sits two Golden Globes along with seven other awards and 57 nominations, and for good reason. This show has managed to stay fresh, lovable and hilarious during its entire four-year run. However, one thing Brooklyn’s not particularly known for is using its platform to tackle too many hard issues. This wasn’t necessarily a bad thing, as too much of that might have alienated some of the show’s fans or even seemed a bit off brand given its light-hearted nature, but apparently things have changed. In the episode titled Moo-Moo, the gang takes on a very relevant social issue, especially where police are concerned -- racial profiling.

In this episode, Sergeant Jeffords (Terry Crews, pictured at top) is off duty and walking through his own neighborhood at night while searching for a toy one of his adorable twin daughters lost.  (She calls the toy “Moo Moo.”)  As he finds it, a white officer in uniform approaches him in an unnecessarily hostile manner.  Within seconds he accuses Jeffers of not living in the neighborhood and then draws his weapon. Jeffers attempts to disclose the fact that he’s also a police officer, but the white cop just won’t let him speak.

The show cuts away, divulging that the situation was later resolved off screen without incident, but the officer’s blatant profiling still understandably outrages Jeffers. The problem with that is, even though his resulting urge to file a formal complaint is obviously justified, the act of snitching on a fellow cop is frowned upon and could adversely affect his career.

This is a pretty interesting direction for the show, and it may be a small sign of a greater overall shift in tone to come.  The cliffhanger episode that was telecast before winter break abruptly ended after Gina Linetti (Chelsea Peretti) was hit by a speeding bus and was the first notable tone shocker this season. Sure, given that the characters are cops there is usually a reasonable amount of danger around, but this was something else. The Gina bus-hit was jarring enough, mostly because of the open-endedness of its outcome in the weeks leading up to the show’s spring return, but racial profiling is a much more serious story. Acknowledging so serious an issue in so organic a way gives the impression that the showrunners are ready to stretch their legs a bit. 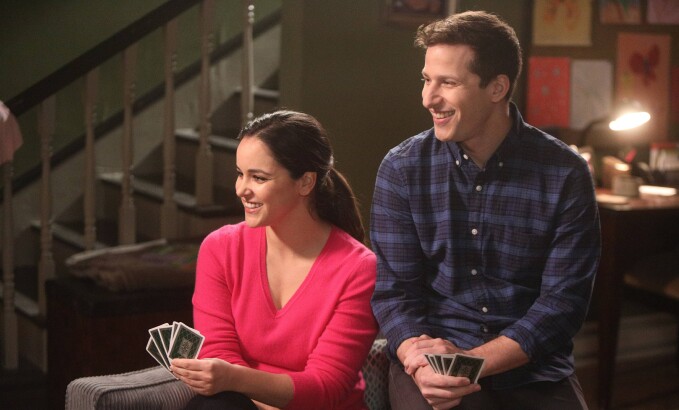 Most sitcoms dabble in social commentary to some extent, but they’re usually shows that revolve around families.  Brooklynis a little different because the family shown isn’t a traditional one, but that hurdle is handled quite cleverly through the inclusion of Jeffers’ daughters, Cagney and Lacey.  During this whole thing there’s a subplot where Peralta (Adam Samberg) and Santiago (Melissa Fumero) are babysitting the twins while Terry’s busy, and the girls act as a mouthpiece for the viewer by asking honest, direct questions about the situation. (Fumero and Samberg are pictured above.)  This forces the couple to answer the hard-hitting questions the episode poses in a simple and frank way that really cuts to the heart of what the writers are trying to say.

When the white cop first approached Jeffords, my knee-jerk reaction was “Uh oh, this can’t be good” -- and as it turns out, it wasn’t.  The feeling that a person of color can’t interact with the police without the situation going south is one that many Americans share, and even though this fictional situation ended non-violently (Jeffords only avoided an even shittier night because he’s a police officer), I still shudder at the possibility of what could have been.  The sad truth is racial profiling does happen, and the sadder truth is it doesn’t often end with a finger wag and a warning.  This isn’t the kind of show where the main characters die.  Even Gina’s close call -- as alarming as it was -- still felt like a pump fake.

That’s not to say that I ever truly believed Jeffers would die, but there was a moment where I instinctually feared for the character’s life, because real life has taught us that death is all too real a possibility during these incidents.

All in all, Brooklyn Nine-Nine handles the topic well, taking a firm stance on affecting change in the most effective way possible.  The comedy is still as present as ever, but it’s never used to trivialize the issue at hand.  Furthermore, filtering the harder truths through the sort of language one would use to explain things to a child made the information accessible in a way that simplifies it but doesn’t talk down to the audience, and that was a masterstroke as well.

This show is built on lovable characters and levity, but this crack at something a little more serious is a satisfying one, and I would welcome more of it. There’s a reason this series has made it this far and it’s pretty dope to see that it’s still capable of growth.