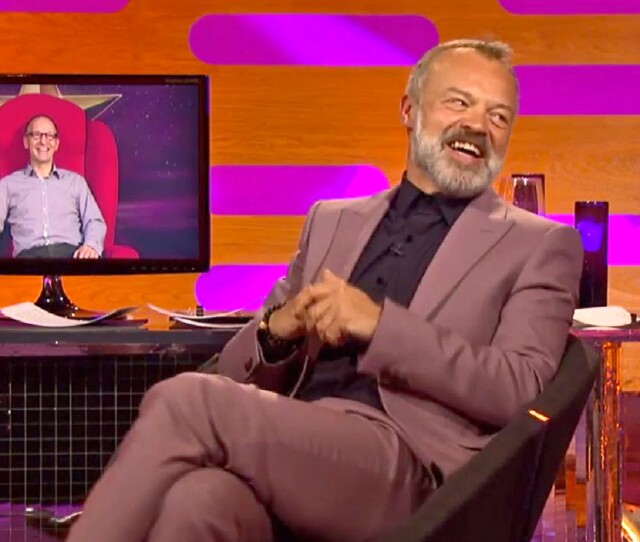 Politics aside, if I hear one more Trump joke or one more forced Trump impression on our late-night talk and entertainment shows I’m going to scream.  (Of course, every time the President talks or tweets he all but asks for a good roasting, but still …)  Their humor has gotten a little one note for me, which is why I recently decided to take a break from them all, at least temporarily.  How I wish we had Graham Norton to save the day.  He's a genuinely funny man who seems to understand what people want to watch and may just be the world’s best at what he does.  There is no overkill on his show.  How wonderful would it be if we got to enjoy him on a nightly basis as an alternative to the current crop of late-night talk hosts?  I can dream can't I?

Norton, whose show is seen on the BBC across the pond and here on BBC America, does not ignore political subject matter; in fact, he does quite well with political guests.  He recently conducted an extended one-on-one interview with Hillary Clinton while she was on tour promoting her new book, What Happened, that served them both extremely well.  One-on-one interviews are rare for Norton, as that big red couch of his is usually filled with a tantalizing assortment of celebrities interacting with each other as well as their host, so his handling of the interview was all the more impressive.  In all of the interviews she has done I have never seen Clinton as relaxed and, frankly, open as she was on his show.  Norton asked questions about the election and about Donald Trump from the perspective of someone who was genuinely interested, rather than someone who was on the attack and trying to be the best Trump Dumper in the business.  His tone was never more than conversational.  Perhaps that was why Clinton was able to be so candid without losing her sense of humor. 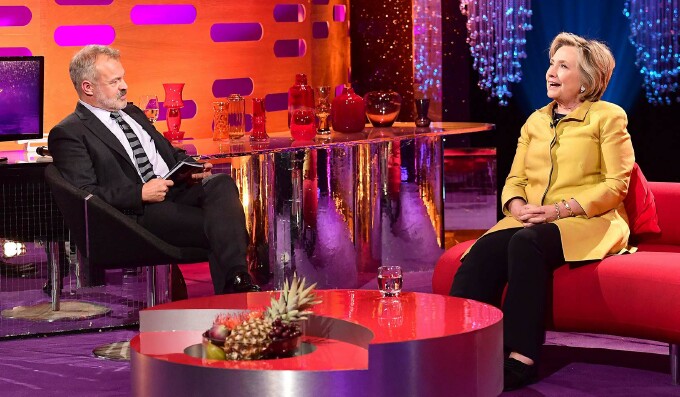 The closest we have here to someone of Norton’s frisky humor is Andy Cohen on Bravo’s late-fringe favorite Watch What Happens Live!  But Norton knows how and when to be subtle, never coming on too strong and, in the process, assuring that his show never gets old.  Cohen, not so much.  Also, Norton never really makes his show about him.  It is always all about his guests.  Cohen, not so much.

In England, Norton’s show is telecast only once per week -- and in primetime -- so it really isn’t fair of me to compare what he does to what our cavalcade of late night hosts are asked to do five nights a week.  (It should also be noted that the version we see here is edited for time, so it moves right along.)  As I said, my thoughts about having more of Norton on television are admittedly little more than a very nice dream.  But the general intent of his show, and of the talk shows here, is largely the same, so why can't ours be more like his?  (One of them, Late Late Show with James Corden, actually went so far as to take an element of Norton’s show and bring all of Corden’s guests out at once, plunk them down on a couch and engage them in a group interview.  Even so, it just isn’t the same.)

Surely one of the broadcast or cable networks here could locate a talented individual here who might be interested in hosting a once-weekly prime time interview program – preferably one with as much great good humor as Norton’s.  HBO has had success in that area with Bill Maher, though he pretty much plays to a particular audience, while Norton is easier to take and has broader appeal.  (Maher, like Stephen Colbert and Seth Meyers, leans too heavily toward talking atviewers rather than with them.)  With viewers showing less and less interest in broadcast network sitcoms and dramas this might be something for one of them to consider.

I recall that Comedy Central brought Norton here in 2004 and tried a nightly half-hour show with him called The Graham Norton Effect.  It lasted only three months.  I don’t recall ever watching that program, so I can’t comment, except to point out that Norton’s humor isn’t as in your face as that of the personalities that have succeeded on that network.  But it doesn’t matter.  That was then and this is now … and Norton has never been better.