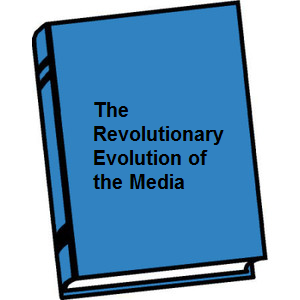 “The Revolutionary Evolution of the Media” – Chapter 8, Part 5

"The Revolutionary Evolution of the Media" is a book in progress. Go here to read the previous chapters.

Film first brought video, so to speak, to the masses packing movie theaters around the world.  But as film developed from shaky to slick with color and then wider screens in the theaters, tinkerers were playing with much smaller presentations.  Home movies debuted in 1923 when Kodak introduced 16mm film using some of the first acetate safety film.  Kodak hired a filmmaker to produce the 16mm Kodascope Library.  The format rapidly grew as it entered the education market with optical sound tracks in 1935.  During World War II, the ease of use with the lighter cameras and cheaper film drove a lot of war and news reporting uses for newsreels and, later, TV.

In 1927, Philo T. Farnsworth filed for a patent for a “dissector tube” which demonstrated the possibility and probability of television.  Just two years later, Russian-born American scientist Vladimir Zworykin demonstrated a practical system for both transmission and reception of television.

A number of experiments in the US, UK and the USSR in the early ‘30s drove the development of commercially practical TV.

General Electric once claimed the first US TV broadcaster, W2XB, when in early 1928 it broadcast experimental pictures from its Schenectady, NY facilities.  Later that year the forerunner of WNBC launched in New York City.

In the UK, Broadcast Relay Service, Ltd., later branded as Rediffusion (which means broadcasting again) launched its first radio wired service in Hull aimed at those with weak BBC signals.  Rediffusion manufactured radios and sold or rented them along with the wire, later coaxial, cable connections.  When television came along, Rediffusion also manufactured TV sets starting with service from the early experimental channels.

But the first real regularly scheduled television broadcast service began in the UK in 1936 when the BBC launched in London.  (The year Lifemagazine debuted.) Broadcasting was for four hours a day with some 12,000 to 15,000 receivers available … many in pubs.

Solomon Segall launched an early version of pay-TV, called Scophony, in the UK broadcasting encoded sports events to theaters with four-foot high screens in the early ‘30s.  Segall also developed a home receiver that was never distributed.  Segall was the son of a Russian rabbi who studied at the University of Moscow.  After the Reds beat the Whites, he went to Berlin and then later studied at the London School of Economics.  After WWII, Segall went to New York and founded Teleglobe-Pay Systems but was stymied by theater owners.  Overtaken by cable, he licensed his technology.  He died in New York in 2001 at 101 years of age.

Back in the UK, after a Mickey Mouse cartoon and a test signal, the BBC-TV abruptly shut down on September 1, 1939 at 12:35 pm to prevent Axis planes from using the signals as a homing beacon.  The BBC resumed TV programming with the same cartoon on June 7, 1946.

Meanwhile, Orson Welles’ War of the Worlds was broadcast on radio causing panic in the streets. In the USSR, a 30-line electromechanical TV experiment debuted in 1931 with the first commercially manufactured TV sets following in 1932.  Regular broadcasts began in 1937 using RCA equipment and sets.

Back in the US, all licenses for TV broadcasts were at first experimental and non-commercial.  The Federal Communications Commission (FCC) had been willy-nilly issuing licenses without any real consideration about signal overlap or signal interference.  Some stations were electromechanical, some were all electric and the number of “lines” of transmission varied wildly.  The aforementioned Philo T. Farnsworth had demonstrated the first all-electronic system in 1934 showing the real future of television in the US.

In New York City, RCA subsidiary NBC began regular broadcasting on April 30, 1939 with the opening of the World’s Fair.  But commercial broadcasting had not yet arrived.  In 1941, the FCC set standards named after the National Television System Committee or NTSC with 525 lines of vertical resolution with interlaced scanning of 30 frames per second and 60 fields per second with frequency modulated sound.  The FCC deemed TV ready for commercials and issued commercial licenses to NBC and CBS stations in New York on July 1, 1941; next in line was a Philco station in Philadelphia.

And then came the first TV ad: “Bulova Watch Time” ran for one minute (at a cost of either $4 or $9 depending upon source) during a Brooklyn Dodgers versus Philadelphia Phillies game on WNBT (now WNBC) in New York.

New developments in media basically ground to a halt when WWII erupted around the globe (today, many pundits are pointing back at the Archduke’s assignation and the adventures in the Ukraine).  Only around 5,000 TV sets were in use at the start of the war when the manufacturing of civilian TV sets was suspended.  Not surprisingly, the number of TV stations actively broadcasting began to dwindle.  Of the ten on the air before the war, only six stayed on throughout the war, most offering only four hours a day.

In fact, mass media as a whole (including newspapers, magazines, records, movies, newsreels, radio and a little video at the start of WWII) took as step backwards as posters (think Rosie the Riveter), greater government control of media and the refinement of propaganda (think Goebbels) all moved forward.

This doesn’t mean that technological advancements involving media also stopped during the war.  As we’ll see shortly the war generated and refined technologies that would soon have an enormous impact on media.

We’ll look at wartime media around the world in the next chapter and return to the developments of television and the explosion of media in the latter half of the 20th Century in a couple of weeks.

Next week: Chapter 8 Part 6 – Propaganda, WWII and the Media