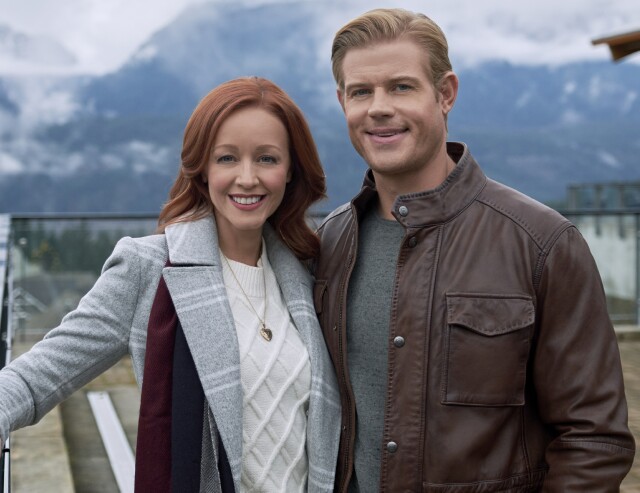 Following a two-year hiatus, Trevor Donovan is back on Hallmark Channel this weekend opposite Lindy Booth in the premiere of SnowComing, part of the network’s continuing Winterfest programming event.  For Donovan, last seen in 2017’s Marry Me at Christmas, it’s a welcomed return.  “When I first signed on with Hallmark I wasn't too familiar with them,” he explained during an exclusive interview with MediaVillage.  But Strawberry Summer, my first for them, turned out to be one of the best movies I've ever made.  As I was getting into [doing] these movies, you wouldn't believe all the people that approach me.  I was at a NAPA Auto Parts store in my hometown and this 60-something Hells Angel guy says, ‘Hey!  My wife watches those movies!’  It really was a testament to how far-reaching these are and that doesn’t happen a lot.  It's one of the most highly watched networks on cable television and a place that families can go to for something morally uplifting and to help them escape the 'not-so-happy' news."

In SnowComing, Donovan stars as famous NFL quarterback Jake Gillette, who, following a Super Bowl loss, returns to his hometown to celebrate the retirement of his former high school football coach, Coach Kerrigan (Ed Marinaro).  While there, Jake also encounters former flame Samantha (Booth, pictured at top and below with Donovan), the woman he left behind for career, and whose father just happens to be Coach Kerrigan.  “Sam finds Jake in her family’s living room,” explained Donovan.  “They haven’t spoken in years and she's not thrilled because he left.  I mean, Jake had to follow his dreams.  Understandably, there’s some resistance on her behalf as far as letting Jake back into her life.

“But seeing her again and being at home again reminds Jake of everything that was important in his life,” he continued.  “While romance ensues, there may or may not be love at the end.  I'm really not promising anything, but there's a possibility of a happy ending -- unless Hallmark decides to take the movie in a completely different direction.  Still, I'm pretty sure it will go the happy route.”

When it came to playing a famed footballer, Donovan was ready.  He played in high school and while the film didn’t require him to actually play, he could handle the ball for a few scenes.  He also identified with Jake on a personal level.  “I like that while this guy is kind of famous, he comes back and he's still that small-town mountain kid at heart,” he said.  “That's relatable because it's how I grew up also.  I liked the fact he was still a very grounded and warmhearted individual.  Growing up in Mammoth Mountain, CA, it was a small town.  I'm still in contact with a lot of people I graduated high school and college with.  I visit at least four or five times a year as there’s something therapeutic about being in the mountains, chopping wood, skiing -- and all that fresh air is beautiful.”

However, there was one scene that made Donovan realize he was thankful for movie magic.  “Ah, the baking scene,” he laughed.  “It insinuates I baked a cake, but to be completely honest with everyone, I showed up to set that day and there was the cake.  I did ice it, but I've never even baked cookies!  I'd pop those cookie things open for my mom, then leave the kitchen.  Once there was a bowl to be licked, I'd be on hand.  I know they say you shouldn't do that now, but I did for my entire childhood and I turned out fine.  If you start young enough you can build up resistance.” 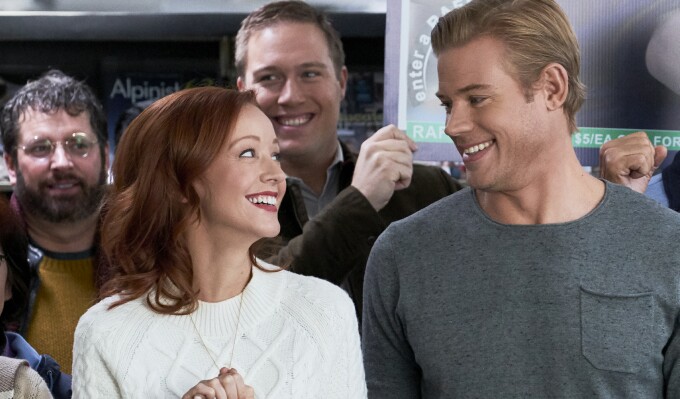 According to Donovan, working alongside Booth was a blast, and their “common sense of humor” helped a lot.  “Lindy was awesome,” he shared.  “It was one of those right away things and we didn’t have a lot of time together before we started work.  It was like, ‘Hi, I'm Trevor.’  ‘Hi, I'm Lindy.’ ‘Action!’  We really laughed together a lot and just had a great time.”

One thing’s for sure, Donovan is busy.  He recently completed the indie film Prescription for Love, playing a doctor for the first and possibly last time.  He’ll soon be seen in the World War II film Wolf Hound (possibly for Netflix) as a German fighter pilot and he completed an ‘80s throwback action/comedy called Hot Water.  He’s also content tending to his popular daily social media posts and his two dogs, Tito and Dogbert.  And he wants to help raise awareness of degenerative myelopathy, a disease that afflicts Dogbert.  “Some breeders will irresponsibly breed with the gene,” he revealed.  “There’s a $60 test that could prevent this.  The only upside is it’s a painless disease, so apart from losing the use of his hind quarters, he gets about fine with his wheelchair.”

Donovan also has hopes for another Hallmark project, one that will incorporate his love of both the network and dogs.  “I’d love to do a Hallmark movie that deals with saving a dog park in a small town,” he shared in closing.  “I have some great ideas for it, so I’m putting it out there.”

SnowComingwill be telecast Saturday, January 26 at 8 p.m.on Hallmark Channel as part of its Winterfest programming event.