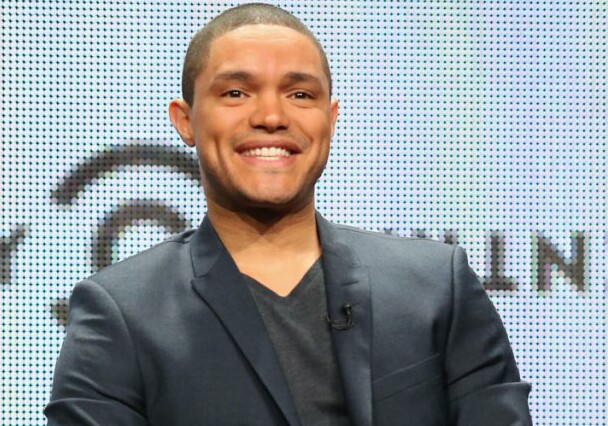 In performance on stage Tuesday night and again in a press conference Wednesday morning, members of the Television Critics Association got to know the man they will likely honor in the years ahead with multiple TCA Awards in the category of Outstanding News Program – controversial comedian Trevor Noah (pictured at top), who will take over Comedy Central's "The Daily Show" on September 28. Noah, a smart and engaging guy who joined "The Daily Show" last year as a contributor, quickly and efficiently charmed the group, setting the stage for years of admiration and handily putting behind him lingering memories about a series of sexist and anti-Semitic jokes he tweeted a couple of years ago.

Of course, other than Jerry Seinfeld there likely isn't a comedian anywhere who hasn't offended somebody at some time, often with riotous results. That's showbiz. Noah is no exception, as the ongoing fuss over those haunting tweets makes clear. But he assured the TCA that he has grown as a person since tweeting them and hasn't sent out similar content in years. If any conclusions are to be formed from his stand-up performance in Santa Monica Tuesday night, which many TCA members attended, his humor today is more focused on racism.

Noah likely has nothing to worry about. When it comes to comics and their material, critics and audiences happily forgive and forget and wait to be offended all over again. And when it comes to "The Daily Show," the TCA at its annual awards ceremony frequently enjoys singling it out as the best news program on television, even though it isn't one. Many years ago outgoing host Jon Stewart, who showed up at the awards to accept the honor, couldn't contain himself, asking the TCA, "What the f--- is wrong with you? We're not a news show!" (I'm paraphrasing, but that was the gist of his remarks.)

Noah weighed in on the news vs. comedy thing. "I'm still in the comedy business," he said. "That's the most important thing Jon Stewart left with me -- we are in the comedy business. It's Comedy Central, and that's exactly what we're trying to do. It's our comedic view on the news as opposed to news with a comedic view. You know, that's the very distinction that we have to be careful that we keep on ensuring. So comedy is the main thing, and I'm not worried about people taking it the wrong way if we're delivering it in the right way. You can never control how people absorb what you say. All you can do is control how you tell it."

Seeking to address and move beyond questions about his infamous tweets, Noah noted, "No one confronted me two and a half years ago [when the tweets went out]. I think as a whole, funny enough, Twitter changed. If you look at the way Twitter has evolved, if you look at the way social media has evolved, it goes through phases. At one time it was just a posting board, and then at one point it became the room for jokes. That's what Twitter used to be."

He later added, "Now Twitter has become a largely negative place where people go to give just horrible reviews about TV shows and things that they don't like, and they spend all day doing that."

That isn't entirely true: Twitter makes it possible for people to express their outrage over the horrors in the world and motivate crucial changes. We saw the proof of that yesterday with the continuous and growing condemnation of Warren J. Palmer, the Minnesota dentist who savagely slaughtered the beloved Cecil the Lion. (Read CNN's bloodcurdling account of this atrocity here.) One might note that it was a few moments of broadcast television – namely Jimmy Kimmel's angry and at times tearful expression of anger and disgust on his ABC talk show Tuesday night – that sent the Twitterverse into overdrive on this subject. (For me, my first awareness of this terrible story came via a headline blast from the increasingly invaluable Hollywood Reporter about Kimmel's emotional reaction to it.)

Cecil's tragic fate and the growing media firestorm about it remained top of mind throughout the day. Before their three-hour afternoon block of press conferences, National  Geographic Channels sent out a press release about its special big cat programming on World Lion Day (August 10) and upcoming public service announcements about the importance of protecting these animals. The release contained this quote from executive vice president and general manager of Nat Geo WILD Geoff Daniels: "Unfortunately it's news like the tragic death of beloved Cecil that reminds us that our work to save these majestic animals is far from over. Big cat populations are in dramatic decline, and it is our network's responsibility to do everything we can to bring awareness to their plight." 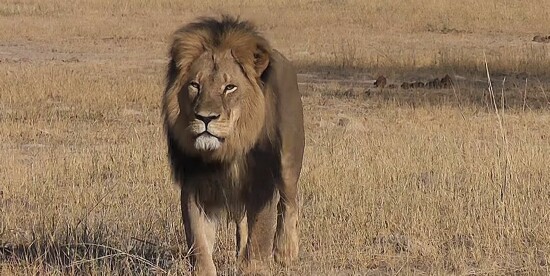 Also in the release was a reminder that Nat Geo WILD is supporting the National Geographic Society's efforts to protect big cats by promoting the hashtag #5forbigcats, an initiative that asks people to give $5 to help the cause.

Later, when Daniels took the stage to introduce panels for the Nat Geo WILD programs "Vet School" and "Wild Yellowstone" he began by commenting on the slaughter of Cecil. "I can't start today without following back up on the headlines of the last 24 hours and that senseless killing of Cecil, the lion who lived in Zimbabwe," he said. "Nat Geo WILD has supported the National Geographic Society's Big Cats Initiative since the moment we launched five years ago, and it is news like this that reminds me, and frankly all of us, why we are here. I think many of you know that big cats are in serious decline. In fact, there are some estimates that there are less than 32,000 left in the wild. So it's our responsibility to do everything we can to bring awareness to their plight."

Daniels then asked TCA members to take a moment to tweet #5forBigCats and help bring awareness to the issue and "actually move the dial."

"Let's do this," he said. "I'll wait. And we'll be following it all on Twitter." Sure enough Nat Geo PR (@NGC_PR) and Nat Geo WILD (@natgeowild) re-tweeted all of the cooperative critics' tweets.