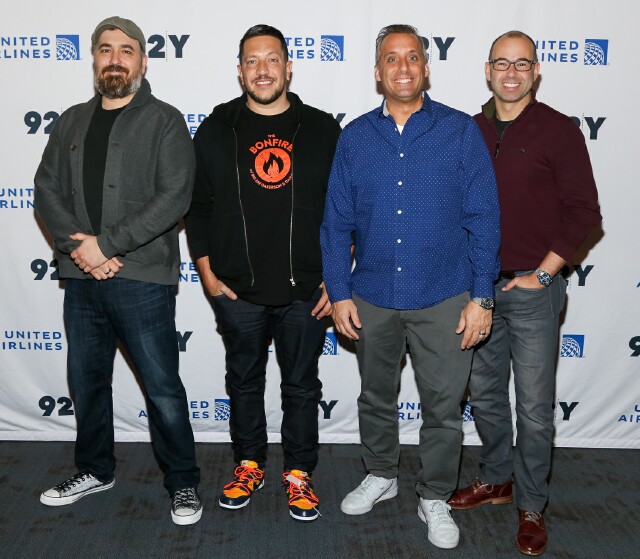 The improv comedy Impractical Jokers, which set the agenda for truTV’s brand as a comedy network, started with a wiseacre at a Staten Island Catholic high school.  Joe Gatto would smell the elbow of his religion class teacher as she walked between desks.  Luckily for him, the teacher never noticed, but classmates did.  Soon he became friends with three of them.  The four (pictured above, left to right) -- Brian "Q" Quinn, Sal Vulcano, Gatto and James "Murr" Murray -- began hanging, playing pranks and goofing around, eventually forming a comedy troupe known as The Tenderloins.  For years they played tiny clubs, often filled with family and friends.  They all had other jobs.  Gatto worked at an upscale children's furniture store.  Vulcano worked in finance.  Quinn was on the FDNY -- a job he held for two seasons after the show began.

Murray went in an entirely different direction, working in TV development, where he was forever trying to pitch his own shows.  One of them was Impractical Jokers, which he successfully pitched to NorthSouth Productions.  It premiered on truTV on Dec. 15, 2011, and just reached its milestone 200th episode on Feb. 13.  The group's first feature film opened in theaters on Feb. 14.  They start shooting Season 9 of their series today.

Last week I moderated a panel with the fearless foursome at New York City’s 92nd St. Y.  The men’s friendship rings of the truth from knowing what the others looked like in high school and standing by each other through heartbreaks and highpoints.  This emotional intimacy fuels the ridiculousness of their show; they know what buttons to press to get reactions.  They challenge one another to random acts of silliness while they talk to unwitting passersby.  The purpose of the show is to crack each other (and the audience) up while making sure never to make fun of civilians.  They reserve the real jabs for one another.

The guys gathered backstage at the Y before the panel began.  Murray, who bears the brunt of the physical challenges, rewrapped a bandage.  (He had reached into a kitchen drawer and left his fingertip behind, he explained.)  Sal read aloud a pan of their movie and its director, Chris Henchy.  They howled over The Hollywood Reporter review, which begins, “A cheap ploy to wring some theatrical dollars out of a franchise that has already enjoyed vastly more success than any sane person would've predicted.”

This marks the first time over the next couple of hours that they make each other laugh.  That’s what they do.  The rest of us, well, we go along for the ride.  On this frigid night in Manhattan they had about 500 people laughing with them.

The program opened with a clip from Impractical Jokers: The Movie.  In it, Vulcano, who admits to many fears, including cats, is shoved into a seedy motel room.  A growl emanates from the bathroom, and a 600-pound tiger lopes out on the kind of leash that would be flimsy for a toy chihuahua.  Vulcano is righty terrified.  The guys are on the other side of the door, which incidentally does not have an interior handle allowing him to exit.

I had but one question: How did they secure insurance for this?  The answer was never made clear.  But they volunteered other funny animal stories involving Vulcano and questionable insurance.  They once borrowed an elephant at The Meadowlands, because really, where else would you borrow an elephant?  Vulcano’s car keys were hidden in elephant dung.

The movie is thematically the same as the show -- whoever cracks up during the challenges or somehow fails must accept the punishment the others devise.  The film, though, throws in a road trip to make it different.

They transformed that goofing around at Monsignor Farrell High School into a cottage industry. The show that drives truTV engenders legions of loyal fans and has sparked international versions, including those in Dutch and Egyptian.  They had just returned from their fourth Impractical Jokers Cruise and are gearing up to play arenas in the Scoopski Potatoes Tour.

Each man also pursues a solo career.  Gatto is producing.  Vulcano is doing stand-up.  Quinn has a brewery.  Murray writes books.  They’re delighted that they count celebrities among their fans.  Jeff Daniels and Kevin Smith made guest appearances during Season 8, and the movie's plot has Paula Abdul as its jumping-off joke.  I asked if there is any situation they’ve been angling to try?  Not surprisingly, they said there are two.  They want to interfere with two of life’s most important rituals: a wedding and a funeral.

At the funeral, they want to stand on the receiving line, thank people for coming, and see how long it takes for someone to notice that they don’t belong there (or to figure out who they are).   At the wedding, they want to object to the union.  Once they do, they’ll realize they’re at the wrong wedding.  For some reason, the guys have been pitching the wedding idea since the treatment for Impractical Jokers.

The show could conceivably continue for an indefinite time.  But what would happen if one of the guys wanted to leave, an audience member asked.  After the fifth season, Quinn acknowledged that he asked the network what would happen if he didn’t return.  The show would be canceled, he was told.

That’s an unlikely scenario.  These four are solid.  Here’s some more proof.  In the movie, Murray takes such a massive risk on such an insane stunt that he took out a $15 million life insurance policy.  And he made a video in which he says, “My dying wish was for the TV show to go on with my three best friends without me.”

True to form, that isn’t very practical.  But with these jokers, it works.