Can truTV's "It's Personal with Amy Hoggart" Save Us All? 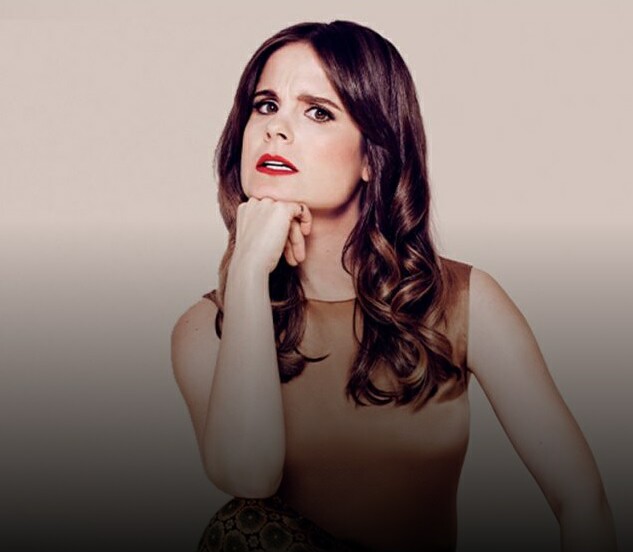 Programs like The Daily Show have always been my cup of tea when it comes to those types of comedic news/talk shows.  The Daily Show, the true O.G. in this genre, eventually went on to begat my other faves through their correspondents spinning off (so to speak).  This is how we got The Colbert Report, Last Week Tonight and Full Frontal with Samantha Bee.  Now, in the same way that Hasan Minhaj moved from TDS into his own thing, so has FFWSB correspondent Amy Hoggart spun from Full Frontal into her new show, truTV's It’s Personal with Amy Hoggart.  How personal is this: She created it, produces it, writes it and is its host.  (Samantha Bee is an executive producer.)  Her plan is to use her abilities as a self-proclaimed empath to do her best as definitely-not-a-therapist to help regular people with the things that bother all of us out here in the real world: Anxiety, not having a sense of humor, negative body image, etc.  Will she save the world, one problematic human at a time?  I don’t know, but the joy I feel watching her try her damnedest certainly doesn’t make my life any worse.

The premise of this docu-style comedy is pretty simple. Amy, a brit who now lives in Brooklyn, NY, goes to various places in America to help people deal with the everyday issues that plague them, and she does so armed with nothing other than the fact that she’s “a really nice person” who genuinely wants to help.

The feel of the series is not unlike that of the remotes Amy and others before her have done on their aforementioned origin shows (like TDS and FFWSB).  There’s a main topic -- like anxiety, for example -- that Amy writes a bunch of jokes around in an effort to both disseminate information and support some sort of overall thesis.  The sentiments are real, but the paths to them are comedy-laden, making each metaphorical pill (the thesis) easier to swallow.  It’s a tried and true method of delivering news and conveying ideas, regardless of whatever the political slant of the commentary might be.

In this case, however, there is no agenda other than to legitimately help people.  Hoggart seems to genuinely want to improve us all and she does her absolute best not alienate her “clients” or make light of whatever their issue is in a way that’s disrespectful or insensitive.  I mean, just watch this woman.  She is actively listening, doing her best to ride the line between genuinely solving peoples’ problems or at least making them feel a little better, while making it all a light-hearted enough watch for anyone to jump in.  She is the crux of this show, much in the same way that Jon Stewart was the crux of The Daily Show.  Not too many people could fill that man’s shoes; Trevor Noah comes close, and people like Trevor are certainly not a dime a dozen.  Neither is Hoggart.  I can’t imagine someone doing what she’s doing and it feeling as good.

The reason this all works is not only because Hoggart seems to actually give a sh*t, but also because she’s British.  Why does that matter?  I don’t know.  What I do know is that Americans trust a British accent.  Coming from the U.K., where there is still literal royalty, seems to imply a sense of order or class that Americans don’t stereotypically represent ... especially these days.

The accent also implies intelligence, as well as comfort to a certain extent.  Tony Stark is a genius, but the super-intelligent A.I. he creates to be his digital best friend, J.A.R.V.I.S., has a British accent.  Batman’s right-hand man and confidant, Alfred, is British.  Some of the best actors in Hollywood come from the U.K., which on some level gives them validity (which is comforting to studios).  Hell, I even changed SIRI’s accent to the British one on my iPhone, purely because it was more calming and professional sounding.  So, when we get this super-nice British lady who’s traveled across the pond just to help us silly Americans out, it clicks.

Accent aside, I think Amy Hoggart is as likeable and genuine as they come.  Much like the remotes she created on FFWSB, the reactions of the real-life people she interacts with is everything, because they are as genuine as the real-life problems they face.  Amy isn’t ending world hunger or stopping all wars but helping some dude in New York with his crippling anxiety is a step towards normalizing personal issues that we all face.  And she does that in a way that’s healthy and hilarious.

There is no shame in feeling shame, or having a warped view of your own body, or falling victim to anxiety, because we all do, and like a heroic, brown-haired version of the Orbit gum lady, Hoggart is out here in these streets using her empathy and emotional honesty to save all of us one by one because, to her, it really is personal, and I dig it.

It's Personal with Amy Hoggart is telecast Wednesday at 10 p.m. on truTV.