Turner at TCA:  The Reilly Report 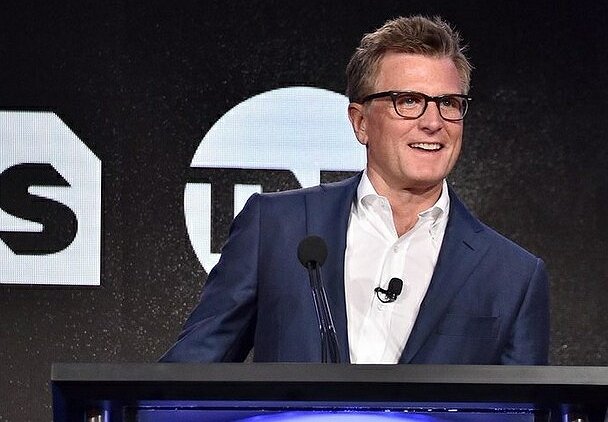 Beverly Hills, CA – TNT and TBS President Kevin Reilly sent a shockwave through the International Ballroom at the Beverly Hilton Hotel the other day, where members of the Television Critics Association had assembled for a morning of press conferences from a number of Turner networks.  As always, he was direct and to the point.  “Two years from now, you’re still going to be covering as many shows, I’m sorry to say, but you will be covering, for sure, [fewer] entities.  That contraction will start rolling out over the next couple of years.  We will be here, thankfully, and we’re going to continue to make this kind of television, even as the definition of television opens up and gets redefined, which we will be a part of.  So we will be radically different in two years than we are sitting here today, which is pretty different than we were two years ago.  Even with these shows, we’re not done.  We’re really just beginning.”

Reilly is the first network executive to bring up at TCA the much-discussed possibility that the number of basic cable networks will indeed decrease in the not-too-distant future.  Conversely, they all talk about the ever-increasing amount of programming, particularly of the scripted variety, though Reilly is the first to “apologize” for it, even humorously.  (“What is this, day three or four of the tour?” Reilly asked the crowd.  “And you’ve covered 9000 shows?”)

As Reilly expressed, even if the number of cable networks contracts, the volume of programming will likely continue to expand.  Through it all he is certain the Turner networks will endure and grow stronger, thanks in part to the bolder original programming he has brought to TNT and TBS.  “Two years ago we came here [and] talked about the makeover efforts we were going to do on these two networks,” he recalled.  “We continue to be in the early stages of the evolution.  I am thrilled with what my team has done.  You are seeing the outward phase of it right now, which is these shows that we’re really proud of and [have developed] in a short amount of time.

“We really had no original comedies to speak of on TBS,” he continued.  “Now we have five shows in the top 20 and three in the top five, starting with Full Frontal with Samantha Bee at the top of that pack.  Of the 65 returning comedies on cable right now, two thirds of them, due to the systemic pressures, are down year over year.  All of our shows are going to be up year over year in their return.  That is no small feat in this day and age.”

As for TNT, “you’re seeing the first real wave of our effort -- our rollout this summer [in] an environment [with] literally hundreds of original dramas on television,” Reilly said.  “In the cable top 20, we have our new drama Claws in at 17 and [returning] drama Animal Kingdom at 19.

“We had talked about wanting to get younger, not just because we don’t want an older audience, but [because] it’s a marker for being connected into the new world way,” he continued.  “We’re about 14 years younger with our new crop than we were with the previous crop.

“One of the troubling things is, of the top 20 returning shows on cable, every show is down year over year except Animal Kingdom, which is up,” he added.  “Most of them are down very, very healthy double digits.  So I don’t love that systemic effect, but I’m really proud of the work that we have done.”  He also noted that TNT and TBS have ramped up their social media efforts.  “TBS is the most social network on cable right now,” he said.  “TNT has come from nowhere and is now among the top five.”

Reilly later elaborated on his comments about how the business will change over the next two years.  “You’re going to see entities that are currently digitally focused trying to emulate and move into us, so how people watch and the different ways they connect will see some expansion and some radical transformation," he asserted.  "We’re going to be a part of that.  We’ve already been on the move.”  When he was asked to join Turner, he recalled, “a big part of our conversation from the get go was not just about putting things in that box, but redefining what the box is and getting on our toes for that change.  We’ve never thought that the change was ‘five years from now.’  The change is now.  It is certainly going to be accelerating.”

Asked to further explain what he meant about consolidation, Reilly replied, “I think you’re going to see additional consolidation … and different corporate alignments.  There was a very good business model for a long time [with which], if you had leverage, you could create another network.  I think Turner was very, very smart and ahead of the game by not taking the leverage and forming three other networks.  We kept a very tight pod. The entities that are floating, you know, six, seven, eight networks … it will not be sustainable going forward.  That’s not necessarily a bad thing. It’s just where it’s headed.  And other entities will morph into new means of distribution as part of these realignments.”

The countdown clock that TNT now runs during commercial breaks, alerting viewers to the number of seconds they have until a show resumes, was another hot topic of conversation.  Reilly said it has been a success, in part because “we have less than half the commercial breaks of any other network.”  The clock came about, he explained, as a result of trying to create a better experience for viewers.  “We get feedback anecdotally that people like the clock.  Maybe you can [say that] it tells them how long they have to skip through commercials, but we actually give them a frame of reference.”  If a viewer happens to be in the market for a car, he said, that person will stop to watch a car ad.  Movie trailers are also skip-stoppers.  “What we have seen, for sure, is that with the smaller pod, real awareness on behalf of the consumer is a better experience and [people] appreciate it.  [There is] actually better recall for the products and better intent to purchase, meaning people say ‘Yeah, I remember that commercial.’

“We’re working on the business model,” he continued.  “I don’t think we’re going to be able to move the industry here single-handedly, but as we evolve, we certainly want to create a better experience for consumers.  So this is really a trial run for that in whatever form it takes.”