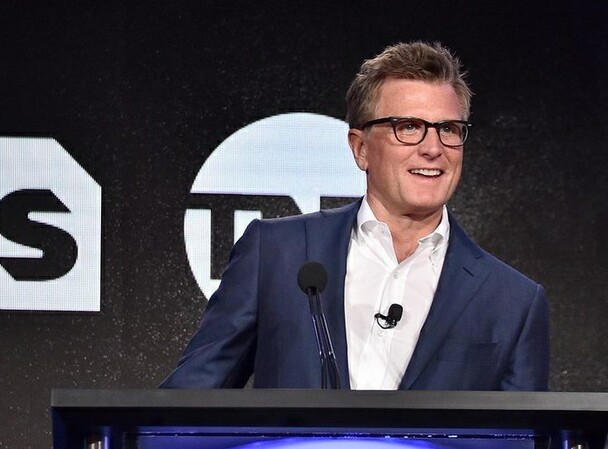 Pasadena, CA -- Kevin Reilly, long a favorite at Television Critics Association tours during his time at the top of NBC and Fox, on Thursday made his first appearance in front of this organization since becoming President of TBS and TNT and Chief Creative Officer of Turner Entertainment Networks one year ago. It was no ordinary session with a network chief. Talking about the massive changes that are already underway at TNT and TBS, he said they are likely “the beginning of what will hopefully be a new way of looking at the business of cable television and what it means to be a network.

“We’re pushing back,” Reilly said of the work he and his team have done during the last 12 months. “We are going to make some moves that I think are going to be very, very significant. The spirit of this company was set many years ago by Ted Turner who defined what cable television was. And frankly, we intend to rewrite the rules now to lead the transition to the next era [and] define what a TV network is in years to come.”

The cumulative objective, he noted, “is to more sharply define who we are at [TNT and TBS] and to better meet the viewers’ demands for both original content and a better viewing experience.”

Talking about premium original content, Reilly said, “We’re supplementing our considerable programming budget with over a billion dollars in the next three years.” At TBS, that means the addition of the NCAA basketball championship. In tandem with the Final Four, “that gives us very high awareness, very high circulation,” he explained. “We have lots of room for improvement on brand affinity to become a destination for originals, and this is where we’re really going to make our first big move. Because, to be a success today, you’ve got to be part of the cultural conversation and make some noise.”

Also coming to TBS are six new scripted comedies and one new reality show. The comedies include “People of the Earth,” about a support group for alien abductees, and “Angie Tribeca,” which will kick off on January 17 with a 25-hour, commercial-free, ongoing marathon of its entire first season, which consists of ten episodes.

Reilly said the intention of the “Angie” marathon is not to “push back” on Netflix. Rather, its “a big stunt to take a show that is intentionally crazy and silly and over the top, and to do an over the top stunt -- not a 24-hour binge, but a 25-hour binge. No network has ever put on an entire season in one day. I don’t anticipate that to be a ratings play. It’s sort of a way to signal the lights are turned on at a new TBS. We’re going to experiment with lots of different things. There are no rules at all, and I hope it’s the first of many rules we are going to break on air and off air.”

Over at TNT, look for “bolder, more cinematic fare,” including a very promising drama series adaptation of the gritty feature film “Animal Kingdom” produced by John Wells and starring Ellen Barkin (which was previewed during the Turner session to very positive response even though a complete pilot is not yet available).

Moving on to the other “tent poles” Reilly next addressed planned improvements to the “consumer experience.”

“We have to provide our product on over the top apps and streaming platforms [for viewers] to watch and binge on their own,” he asserted. “It also means when they tune into our linear service -- and the vast majority of viewing is still on linear TV -- we need to create a better viewing experience. TV is the best advertising delivery mechanism ever invented. It’s unparalleled for building brands and moving consumers. But we have overstuffed the bird. That not only dilutes the quality of the viewers’ experience but also the effectiveness of ads.”

Reilly reminded the room that sister network truTV has reduced its commercial inventory by half, and that Turner sales chief Donna Speciale recently announced a major initiative to redefine the relationship with clients and to replace traditional spots on TNT with more effective branded content that will reduce clutter across the network.

He then announced that negotiations are underway to cut the commercial load in three new dramas set to premiere on TNT, a move that will add eight to ten minutes of additional program time per hour.

“This is an opportunity that we’re putting out to the industry to embrace change and move the needle,” he said. “We’ve gotten a great response from the clients we’ve met with so far, and I’m very optimistic that we’re going to pull this off. And when we do, that means we’re going to reduce the ad load in those hours by over 50 percent, which will be by far and away an industry standard and the best on commercial television.”

On the subject of “business structure,” Reilly said that TNT and TBS “are really revamping almost every aspect of our business inside the halls. These changes today require a new organization. We are building and acquiring competency in technology and data. What that means is we’re going to use data as a tool to not only target and speak directly with our audience on a regular basis, but to also help us sell more effectively in a different fashion and to measure differently.

“We recently announced major restructuring in both our sales and marketing organizations, and this is just a tip of the iceberg,” he continued. “There is no aspect of our business that is not undergoing a major revolution at Turner.”

As for the fourth tent pole, “investments in growth,” Reilly talked about the new areas into which Turner Networks is taking its brands, with an eye toward expanding “what the network ecosystem is all about.” Those moves include the acquisition of Bleacher Report, which Reilly described as “the No. 1 social voice of sports”; the creation of a new startup company called Super Deluxe, an independent subsidiary that is “both a digital content creator and a tech product incubator focused on mobile first consumption”; the purchase of streaming platform iStreamPlanet, and the creation of eLeague, a new e-sports business, which Reilly described as “a huge next generation entertainment experience that we’re going to build in partnership with IMG and Valve, a major game publisher. We’re building to ten-week seasons, a game every day online and a game of the week on television. This will be both an online and televised experience, all building to a bracketed championship round.”

“These businesses are not add-ons to our business,” Reilly declared. “They’re not also rans. These are going to be integral to the core of what we call our network business.

“I think it will take the better part of three years to fully realize this vision,” Reilly concluded. “TBS and TNT will be radically different businesses than they are today. Things will radically change in our business over the next three years. We’re going to be ahead of that change and I look forward to it.”