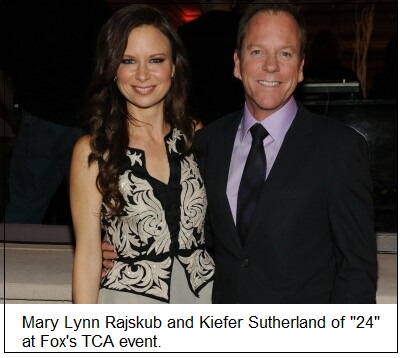 The ongoing ravages of perpetual network budget cutting being what they are it is surprising that the twice-annual Television Critics Association tours still work as well as they do. This is especially true of the Winter Tour, which has been looked down upon in recent years. The broadcast networks don't put on nearly as grand a show in January as they used to, but they still manage to bring all of their important midseason programs to the tour, and they also arrange on-set events on behalf of certain of their shows that often emerge as highlights of these events. CBS this time around was outstanding in that capacity; its set visits included a "last call" dinner at MacLaren's Pub, the bar on "How I Met Your Mother" that is probably second only to the bar on "Cheers" on the list of memorable TV series watering holes.

The idea that the Winter Tour, which typically runs for two weeks in January, is somehow less vital than the group's summer gathering in July or August is absurd. The tour that concluded last Thursday was collectively outstanding, especially during its cable days, when almost every major pay and basic cable entity upped its game and delivered dozens of stimulating, provocative and productive panels. (Some cable networks, including Showtime, FX, USA Network, Esquire and ABC Family, presented during their broadcast siblings' days rather than during the CTAM-organized cable portion of the tour, but that didn't make their TCA presence any less effective.)

If there was one trending topic of any importance during the tour it was that certain networks (most notably Fox) have had it with the multiple restrictions of the standard pilot season (time, talent, creative flexibility and scheduling among them) and will begin to work on projects and nurture them from script to pilot to schedule on a year round basis. This sea change in the making is a response to the broadcast business opening its eyes to all the other television successes around it on basic and pay cable and streaming services, none of which stick to traditional development schedules.

For me and many of my TCA colleagues, the Winter Tour has felt just as relevant as the Summer Tour for more than ten years, ever since Fox made January the premiere month for what were two of TV's most popular shows, "American Idol" and "24." Indeed, it truly feels as if viewers now pay more attention to television during its mighty midseason than they do in the fall. Remember the huge excitement that network promos used to generate during the summer on behalf of their new fall shows and schedules? That's all over now. TV is everywhere, all the time, and that strange feeling that fall isn't what is used to be sometimes permeates the Summer Tour, which tends to be filled with panels (at least during the broadcast days) for new shows that will be dead by Thanksgiving.

The Winter Tours enforce this, largely because they are scheduled at a time when new and returning shows are typically in production and the industry is humming along at full throttle. Granted, they can be counted on to showcase their share of likely broadcast bombs. (CBS' "Friends with Better Lives," NBC's "Growing Up Fisher," Fox's "Surviving Jack," ABC's "Mixology" and The CW's "The 100," all previewed during the last two weeks, come immediately to mind.) But by and large they celebrate everything that TV is at the moment while educating the press about everything that is to come.

NBC, for example, seized the opportunity to bring to TCA late-night stars Jimmy Fallon and Seth Meyers, who were both in top form as they took questions about the new gigs they will each have as soon as the Olympics conclude. Fox utilized its tour day to pump Season 13 of "American Idol" along with the return of its new January staple, "The Following." Fox also hyped the crowd for the return in May of "24" as a twelve-hour "limited" series and the arrival in March of "Cosmos: A Space-Time Odyssey," an ambitious update of the science-driven 1980 mini-series "Cosmos: A Personal Voyage" that is a co-production with the National Geographic Channel.

CBS put together a panel with show-runners from several of its prestige dramas (including "The Good Wife" and "Person of Interest"), all of whom could talk openly about what has happened on their series this season and what may happen in the weeks ahead. ABC drummed up interest in two very intriguing new dramas ("Resurrection" and "Black Box"), both of which will require extra effort from the network's marketing and promotion departments, and the returning comedy "Suburgatory" (another favorite of critics). It also promoted a show that may prove to be the most exciting singing competition series to come along in years, "Rising Star," which will be a summer entry.

As has already been documented in recent editions of the Myers Business Report (all of them now archived in my Watercooler TV blog), basic and pay cable networks collectively stepped up perhaps for the first time in this decade with so many fascinating and informative panels and personalities and so many engaging events that TCA and CTAM, the organization that coordinates the cable days, are considering expanding cable's allotted tour time from three days to four.

FX, which remains the only individual cable network to program an entire day at TCA tours, offered a typically productive schedule. For many TCA members, FX now feels more like a "giant" broadcaster than a "small" basic cable network. The cable networks of NBCUniversal offered several strong panels for shows on a number of their networks, especially the Denis Leary-produced comedy "Sirens" and the returning acclaimed drama "Suits," both on USA Network. And it mounted a grand lunch event to promote its new Esquire network, along with an opportunity to attend a taping of Esquire's intense cooking competition series "Knife Fight."

But NBCUniversal Cable once again failed to utilize its entire day, leaving most of the afternoon open (and the entire evening if one chose not to attend "Knife Fight," which most TCA members passed on). Syfy, Bravo and E!, three networks with shows that generate huge interest among certain TCA factions, were oddly not represented in any TCA activities.

Lastly, streaming services and digital production entities continued to claim more TCA real estate, with sessions for the Crackle series "Chosen" and "Cleaners," a panel for new AOL programming and a visit to the Funny or Die studios. Hulu, YouTube and Yahoo have participated in recent TCA tours, but Netflix, which owes much of its swift success with original series to the unbridled support of TCA members, stubbornly continues to stay away. The same is true of Amazon, which ought to be building support at TCA for its original programming efforts.