TV Guide Magazine for the two last years at the San Diego Comic-Con commandeered a modest yacht in the city harbor and created a floating refuge where busy television stars who were racing from panels to autograph signings to press rooms promoting their new and returning series could relax, unwind, grab some food and drink and play video games. Of course, it was also a prime location for TV Guide staffers to conduct exclusive interviews and take special photos away from the overall chaos of the Con. The 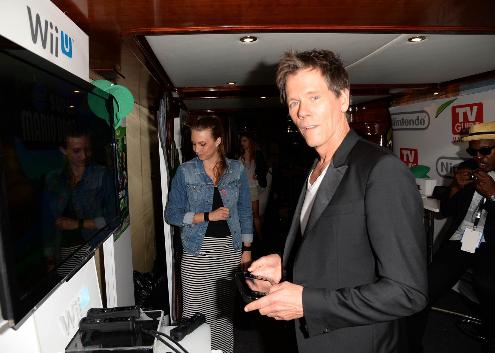 yacht proved so popular that TVGM took over a much larger vessel this year that was almost twice as big as the previous boat. That was a good thing, as the larger space was crowded with celebrities every time I stopped by, and none of them seemed to be in any hurry to leave. TVGM's primary promotional partner on the yacht was Nintendo, which set up an arcade of games in the main cabin, just a few feet away from a well-stocked bar at which Guinness premiered a new beer, Red Harvest. Among the other on-board sponsors were Wet 'n Wild Cosmetics, Ciao Bella Gelato, Tim Horton's Coffee and Diageo Spirits.

Once again, Warner Bros. maximized the potential promotional power of Con attendees themselves, providing every one of them with one of a dozen different oversized bags that could be carried or worn as backpacks and turning them all into walking billboards for those 12 franchises. Several years ago (as first reported in Myers Reports), a small group of Con-goers gathered up Warner Bros. bags, cut them into pieces and fashioned clothing from them, taking citizen marketing to a new level. Warner Bros. now sends Con bags to those same few folks (referred to by Warner Bros. as their "super fans") in advance of every Con, allowing them to create exclusive Con fashions before the event begins and to plan their wardrobes accordingly. (This year's eye-catcher was a purse one woman created from pieces of a "Big Bang Theory" bag that could probably be sold in stores.)

Showtime for the last seven years has enjoyed the most visible promotional platform of the entire Con: The network's logo and the title treatment for its long-running hit "Dexter" have been featured on the lanyards worn by every Con attendee. With "Dexter" about to end its run, Con-goers were wondering what they might see on next year's lanyards. While Showtime likely won't give up that prime space, it's hard to imagine genre fans responding with "Dexter"-like passion to either of the network's new adult dramas, "Ray Donovan" and "Masters of Sex."

District throughout the Con, but this year the excitement on the street was all about the pedi-cabs. Dozens of them were made to look like the iron throne from HBO's "Game of Thrones." Others featured the green man from memorable episodes of FX's "It's Always Sunny in Philadelphia" hanging on the back of their seats. (Speaking of FX, its annual Con party co-sponsored by Maxim remained one of the hottest tickets of the weekend, and was once again the party that young actors and actresses seemed to enjoy more than any other.)

Finally, proving that there isn't a square foot of space at the Con that isn't marked by an advertisement or promotional image for a movie or television property, restroom signs throughout the massive San Diego Convention Center were altered to read "Normas" and "Normans." These were references to the disturbed mother and son who are the main characters in the new A&E series "Bates Motel."